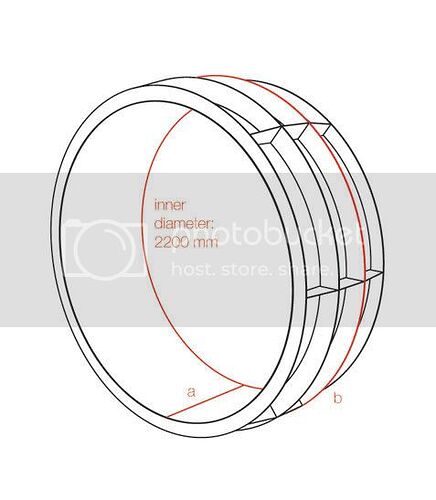 Above is a proposal for a human wheel I would like to make, the inner cylinder would be perforated with holes smaller than the smallest finger without making it non-transparent. The difference with a hamster wheel is that it wouldnâ€™t be stationary and is able to take ( large ) bends.

There will be a first estimation of the thickness of the materials (the rings shouldn’t be able to amputate a hand, but shouldn’t destroy too much grass either), the amount of crossbars and the diameter of the outer rings (wider than the palm of a big hand) using the Cosmos-software. The structure as drawn above would weigh Â±80kg in TIG welded aluminium AW-5083, maybe fibreboard is an option too.
But I was wondering how to define the: 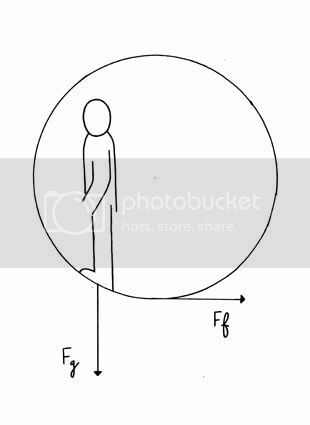 The two forces that I think decide whether the wheel is going to roll or not - rolling resistance and gravity on the person - seem to work in different directions?

The wheel will lean to one side when the combined centre of mass of the wheel and the person in it is not positioned above the resting surface.
(mw.xw - mp.xp) / (mw + mp) = 0
This can be reduced to a function of a and b. 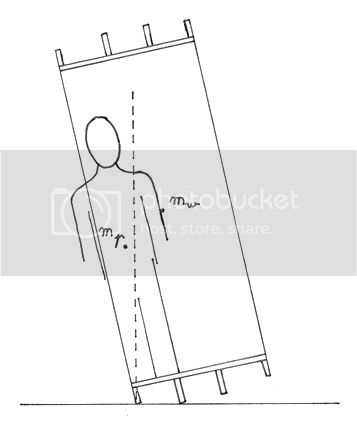 All of these could result in a graph with a and b as axes from which I could deduct their ideal value.

No expert in Human-hamster-wheels but

I would first mak a section out of plywood.
Put the ribs (4) in a position You think would be right.
Section “stand on plate” could be flat, ribes can be cut in to do the curve(large circle section)
Screw/bolt this together and try it out.

This will get you a very quick answer.

I see what you mean, but how would you compensate for the incorrect weight (distribution)?

Without getting into the math too deeply just yet (and speaking as a former physics teacher, that can be a very deep rabbit hole), there are a few fundamental questions/observations I’ve got:

Thanks a lot for the extensive reply!

Some further clarification;
The ribs seem rounded, but thatâ€™s only an optical illusion.
The intention of the wheel is to give an alternative to the walking paths ( paved green space to keep your shoes clean ) in parks, a new experience with more freedom.
Parks are not perfectly flat, this means that safety margins will need to be built in.

My reasoning:
For the first question I compared the wheel to a seesaw with rolling resistance rather than a pivot; it can roll even when the person is just standing. I couldnâ€™t find the horizontal force component, maybe you can?
For the third question I didnâ€™t involve centripetal force because even when the wheel is not moving forward it shouldnâ€™t fall. But I did take it into account for the walking surface, a bit like indoor running/cycling tracks. Maybe the slope is a bit exaggerated, but wouldnâ€™t a spherical walking surface increase the cost? I will use anti-slip paint though. (http://www.protectakote.co.uk/)

Rounding the cross-section would make the turning smoother and add strength, but it would destroy more lawn, it would make it harder to counter the inertia and I have the impression that the speed wonâ€™t be high enough to get proper control over the wheel. Strength could always be improved by using thicker rings and more crossbars.

Iâ€™ll also have to think about the worst case scenario: people could deliberately tip over the wheel, there might be a storm (putting the wheel on its side helps) and the angular momentum makes that the braking distance is relatively long.

it might be worth adding additional ribs or skinning between the ribs with a curved surface, so it’s more like turning a motorcycle, for example.

May I ask what you meant with â€œskinningâ€?

I found three options for point 1:
http://webphysics.davidson.edu/faculty/dmb/PY430/Friction/rolling.html
→ Because the wheel is not rolling yet the rolling resistance should be orientated in the opposite direction acting from the bottom of the wheel in order not to contribute to the rotation of the wheel.
But down the bottom of the page there’s “distribution of the normal forces creates a net torque negating the rotational contribution of the friction” ?

http://cnx.org/content/m14385/latest/
→ Here the formulas are completely different (no rolling resistance coefficient) and there’s no deformation.

I tend to go for the last option because thereâ€™s no contradiction, but I would like a confirmation to be sure.

Been a long time since I did physics or kinematics, but I’d approach this thing more experimentally than via math. similar to B-art’s idea…Make up an ergo model with pipe or similar cheap and easy to work with materials, and have certain elements configurable - width, offset of tracks, diameter, offset of outer tracks compared to the center…


go to a park, and have at it. While I’m sure somehow you could figure the math out, given that the sensation of what it feels like, (control, safety, etc.) depends on so many different variables (including ones not in your system equations such as ground surface, bumps, friction) I think you’d have a hard time getting it right based purely from the numbers alone.

If it helps, googling “human hamster wheel” also seems to show a fair number of pics and hits…maybe something to get you started.

As a side note, what’s the point of this? I don’t really get it.

wouldn’t the user be roughly square to the slope when on an angle…which would mean it would fall over? You might need some large inner chamfer to straighten them out to make sure it doesn’t fall over…perhaps consider some light materials with some padding so this thing doesn’t decapitate you if it falls over.

Do you have an example of a similar cheap and easy to work with materials?
Making it configurable seems harder than doing these calculations to me, there will be a finished prototype for testing though.

Ground surface and friction are inherent in the rolling resistance. Small bumps shouldn’t be a problem either, the diameter and width of the wheel are too big to feel much of an impact, large bumps can be seen.

While googling for human hamster wheel I found this quote;
â€œI am sure we have all heard of physics groups and classes in school building trebuchets or catapults. They are planning on storming a castle about as much as we are planning on giving extra large hamsters exercise.â€

Dawolfman: Youâ€™re correct, I should have drawn the user perpendicular to the slope as this position is more extreme. But that doesnâ€™t necessarily mean that the combined centre of mass (person + wheel) will pass the dotted line.
Also, Iâ€™m not sure whether padding on the sides will make much of a difference. The calculations will make sure the wheel doesnâ€™t fall over in normal conditions, and even when somebody deliberately makes it fall then the outer rings are min 13cm wide.

Do you have an example of a similar cheap and easy to work with materials?
Making it configurable seems harder than doing these calculations to me, there will be a finished prototype for testing though.

Steel pipe bent on a roller, welded together, adjustable with sliding pipe clamps, wingnuts, etc…? I’m no fabricator, but i don’t think it would be that hard and as mentioned in any case I’d imagine you’d need a few prototypes to get it right…

otherwise, best of luck with the math!

Do you have an example of a similar cheap and easy to work with materials?

JeezoPete, make it out of scrap lumber, plywood, a few tek screws, and glue… .

Is it done yet?

hi, in the same lines than dawolfman666
what will happen in a slope ?
how will you stop it ?
any braking system ?

hi, in the same lines than dawolfman666

The intention of the wheel is to give an alternative to the walking paths ( paved green space to keep your shoes clean ) in parks, a new experience with more freedom.

Whilst the maths is interesting and the concept potentially a lot of fun, I gotta ask why? I see lots of people in parks walking on the grass, lying on the grass or they ride bikes etc not worrying about getting their shoes dirty. If they were in a business suit with polished shoes, then I can’t see them jumping into a giant wheel, just to get off the paths. As parks are not flat and contain undulations, then any time you meet a gradient, you don’t just have to walk your body weight but also that of the wheel up the slope and you’d be pushing against the resistance of the wheel wanting to roll back down the slope. If all you’re trying to do is prevent peoples shoes from getting dirty, give them cool slip on shoe covers or something, not a giant wheel.

Maybe you have a bigger idea behind it and wanted to ask a few questions without giving away what you were really designing, but if not, it reminds me of the old story about NASA spending two million to develop a pen that writes in space and the russians just using a pencil.

All that aside, I’m with the makers. Make one, you’ll learn loads.

the old story about NASA spending two million to develop a pen that writes in space and the russians just using a pencil.

Whilst the maths is interesting and the concept potentially a lot of fun, I gotta ask why?

For your potential fun, and for me to learn how to resist skepticism.

Other answers can be found here and there.
Does anybody have an answer for me?

hi, in the same lines than dawolfman666

ok, then rather for a fun park with a kind of safety zone…
because a 80kg contraption rolling down a slope without brakes
could certainly cause some collisions problems

the old story about NASA spending two million to develop a pen that writes in space and the russians just using a pencil.

Only problem with that story is it isn’t true. The “Fisher Space Pen” was a product of Paul Fisher, not millions of dollars of government research. NASA didn’t pay anything for it, although they did use them (as well as pencils). The Russians eventually used the Fisher pen too. Broken bits of pencil graphite floating around in zero g are bad. 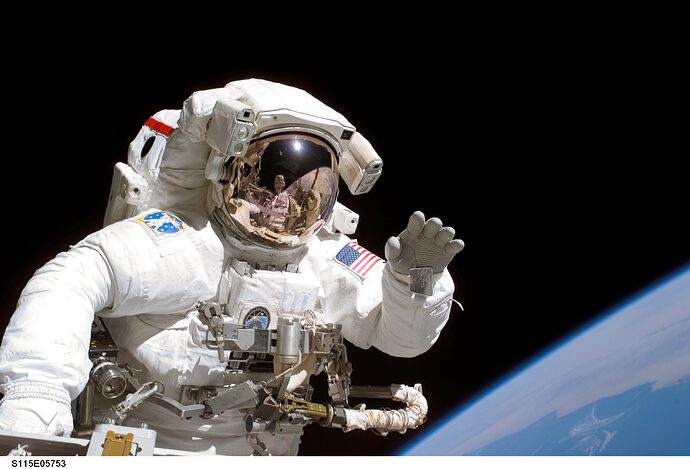 Space race legend claims NASA spent millions of dollars developing an 'astronaut pen' that would work in outer space, while the Soviets solved the same problem by simply using pencils.