You know that thing when you hear a radio presenters voice for years but you never see their face, then when you finally do lay eyes on a picture of them it’s like “what!? - you’re not supposed to look like that!”

Well, I kinda have those imaginings with some of the more regular people posting on these boards. (as perhaps do some of you?) Here’s a brief list of some of my (largely baseless and hopefuly not offensive) imaginings. . .

Yo - in my imaginary world you were (for a while) a little black dude with his peaked cap at a jaunty angle.

Skinny is tall and skinny with a cheeky face

Lmo is a friendly , shabbily dressed construction worker (with egg yolk on tshirt)

Notke somehow has shades of an Albino quality

…I would guess that I dont really post enough commentry for you guys to have built an image of me. I will say however that I am not a girl, even though I might sound like one with some of the stupid stuff I often say

ugh, with only a few hours having passed I’m starting to regret posting this waffle…honestly guys - I do not mean to offend anyone here - I just thought I’d jest on the often strangely preconcieved images we sometimes hold of each other in our minds.

LOL, its a fun exercise… on a little bit of a tangent, I got into the show “Dating in the Dark” (you have to have some guilty pleasure show or another)… its funny to see their reactions when they finally get to see the people they have been dating in a light tight room.

I think Yo and I were at the same conference last year in Boston and I thought I’d say hi. I realized when I got there, I really didn’t know what he looked like beyond some dude with cool glasses. That doesn’t help you find someone in a crowded room of designers hehe.

As for my description…you think I look cartoonish wallflower!!! hehe. I’ve actually been thinking of updating my avatar to reflect my recent changes (curly hair, lost weight). I’ve already modified it once when I started shaving my goatee.

Thats a funny one… not that I know him personally, but from his picture he looks like he shaves his head

somehow I assume that better than some face-like cheeks…

Also, Wallflower, with a login like Wallflower, and that Avatar… I assumed you were a chick…

Ha - yes, I created the wallflower tag because I would watch and listen in the background of these boards for a few years before I dared open my often stupid mouth! I’d post a photo of my silly lookin mug here if it wasnt for the fear that I could say something horribly enbarrasing one day and potentially ruin any career prospects or credibilty I may possibly have left . . And my appologies if enjoying that anonymity annoys any of you braver than I !

I would understand a cheeky facial appearance to resemble something of these images I just pulled off the net. (facial expressions that might suggest someone’s just done or is about to do something a bit naughty!?) 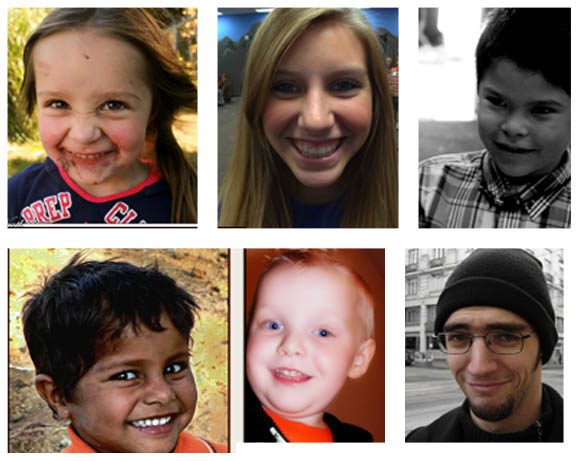 Those cheeky folks are smiling, probably one of the last things I’m known for,

But definitely a bit naughty

Wallflower: time heals all wounds. I doubt Steve Portigal, cg or Yo remember the times I really put my foot in my mouth with them. Go ahead and make our day hehe;)

Lmo is a friendly , shabbily dressed construction worker (with egg yolk on tshirt)

Erm, yes - I appologise Lmo (and also to you other folks!)

I’m guessing that perhaps my resident little inferiority complex raised its head there and I unwittingly assigned some less attractive characteristics to some in order to compensate for the fact that I percieve a lot of the regular contributors here to be far more knowledgable than myself! A pityful example of my overly fragile creative ego I suspect…and I’m easily old enough to know better!

damn, this is hilarious. I’ve change my avatar to a picture of myself pretty much everywhere else… but here

I agree that reading what people write forms an often incomplete image of who they are. I’ve noticed that the conversational nature of twitter is much better at showing personality. Interesting regardless.

Lmo, FWIW I never would have pegged you as a construction worker- more like the straight shooting, no-BS (EDIT)mechanic who sings in a choir on the weekends and roasts his own espresso at home.

I would think LMO is happier being shabbily dressed, because I imagine that he is always wrenching on something. You can’t wrench in Armani.

I worked corporate ID from after graduation from Purdue in '73 through 1989. I took the plunge and operated my consultancy from 1989 through 2004. The “design biz” was never too lucrative up here in San Luis Obispo; the demographics changed from light industrial to heavily Chardonnay and Zinn. SLO is 250 miles from LA, and 250 miles from SF, with nothing more “industrial” in between than a handful of machine shops, and a couple of themoforming companies. Oh, there are quite a few manufacturers but they are operated by the guys that “invented” their own products and have no use for outside help (I chose the words “have no use” carefully). And frankly, it just got to be too much hassle to run down to a forty minute meeting with a client in LA with 24 hours notice.

I still do ID work, more “industrial” than “design” in nature (patten making, mech design engr’g, prototype fabrication, motorcycle accessories). At 54 I apprenticed myself to the International Union of Operating Engineers in 2004, and just recently completed the 6,000 hours of mandatory on-the-job training; essentially I went to “college” for another four years. Hell, my Journeymans Certificate is larger, and more ornate, than my diploma from Purdue. So after this little educational soiree I can pretty much work on and run any thing that is big and yellow.

But industrial design is as much a lifestyle as it is a profession. And with the economy in the terlet there isn’t a whole lotta construction going on … “shovel ready” my arse. My dad always said it’s good to have unrelated skills… . I just never imagined it to this extreme.

classic topic man, hilarious
me as albino = yeah that’ll work, im definately white anyway. think when i signed up as notke (a fresh start from my earlier evil twin alias) my intention was to write in broken english like i was from some weird european country, because a) i LOVE it when kids do that on here, and b) - to quote wallflower - “…the fear that I could say something horribly embarrasing one day and potentially ruin any career prospects or credibilty I may possibly have left …” which i had a tendency to do with regularity on the internet. Once i realised what a resource this place is - and how much i could actually GAIN from ‘hanging out’ here, i switched it up quick smart.

from what i recall theres been photos or links to the ‘real life faces’ of yo & kuchinsky, & a few others but…

Shoenista i always imagined as an old british guy (i dont know what thats supposed to look like - winston churchill maybe?!)
Lmo i thought would be a serious young dude, maybe like he worked in a mine
One of the moderators on here i always think would be a really funny fat old guy (im not gonna say which one)
ADD i somehow imagine as an indian guy?! wtf
Wallflower im gonna have to go with funny older british guy like on harry potter or something…

I dont know WHERE the hell these ‘perceived imaginings’ come from, its almost like word association