Below is my entry: a small three wheel, tandem 2 seat, high speed comuter that can be parked in a motorcycle spot. Still kind of a sketch, but I figured it was a more complete project so I put it in here. The perspective is a bit off on the far headlamp, but I had to crank it out. Didn’t realize it until it was already in.

anyone else want to throw their’s up for view?

driver visibility worries me. glass not working for me. overall seems a little safe. is that from the competition brief? how about explaining the comp and your solution to the challenge.

the 3/4 is all photoshop, the side and top views where overlayed in illustrator from sketches, then rendered in photoshop.

The brief was to design a manufacturable car for the near future that you wanted. So I based the design on my daily needs. I have a very short daily commute, alittle less than 5 miles. I’d love a car that had some of the characteristics of motorcycle, and the efficiency of one of these: 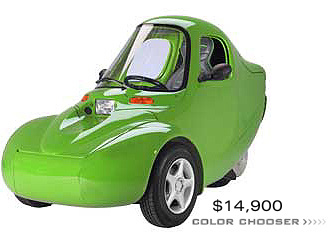 minus the dork factor hopefully. I also thought it would be cool if it was a tandem seater like a fighter jet (had to work the childhood top gun facination somwere into a car designed for me). So essentially it has two very narrow wheels up front for low rolling resistance and manuverability, with two people crammed inbetween them. The cotpit would pop up and back like an aircraft’s. Behind the second seat would be a compact 4 cylinder motor, or a hybrid gas/electric powertrain. Behind that is a fatty drive wheel. The cover hides the drive belt and brakes and what not. I wanted to keep the styling clean. I had visited the aircraft carrier down in San Diego the week before and spent a lot of time studying the f-14, f-4, p-51 and a bunch of other aircraft. I wanted the clean swept forms found there.

In a nutshell, the aim is for the concept to be a fast, simple, non-dorky, fuel efficient comuter. I hear you on the glass, but based on what won the competitiion in the past, I hope it won’t be a problem. I think it could be an issue that is easily resolved.

Sad to say, only people with cool CAD renderings will stand a chance. Afterall, they need something to show to the public, and something to start with instead of wasting their own modeller’s time trying out figure out the designer’s sketch. Just look at previous winning entries. I believe there are way wilder and cooler proposals but without the CAD model.

cool renderings. I dont agree on the CAD work. I think as far as a presentation point of view these definetly get your point across. I think once they decide on a winner you go and help then with the modeling of the car. I dont believe that you just hand in a sketch and then 5 months later they call you and send you to europe to see your car unveiled. i from what i have heard about the contest is that you help in making your renderings into a life size model. I could be wrong. i was going to enter but parcrasinated…

one thing about the sketches are that I am not sure on some things…more technical but for example is it a one seater or two (0r more)? you say on the rendering “Zeroes 2 people” and this is a lil confusing to understand. and scale or atleast to get an idea of scale there are no props or other things in the renderings to get an idea of scale. it kind of looks like a scale of a small 5 seat car. as far as its lengh and wigth (at the front). I am asking this is because. u said in the post it fits in a motocylce spot and by the drawings i cant tell if realistically it could. I am just wondering this is becasue you want these comuters small and very efficent, I mean you dont need a hummer to travel in a commute 5 minutes. so i am looking at these and saying could it became more compact and smaller. just an idea. it flows and workds well as it is now just posting thoughts.


I would have loved to have seen an interior view. i think that would have mixed things up and made it more covered on all aspects. ( but maybe not nessisary if what you are ending up creating is a life size model with just the cars outer shell and no interior…)

Yo keep me posted if anything happens

Good point, something for scale would have been smart. It is much narower and smaller than you are thinking. Think of a fighter jet cockpit. Two people, sitting one behing the other, and tightly wrapped by the machine.

Peugeot always tries to make sense out of its numbering system, so I tried to breack down the name of this concept - the 1003: there are 4 numbers/cylinders, 3 wheels/model designation, 2 people/zeroes in the name, and it all = 1 love and 1 is their desidnation for their smallest cars. A little corny, but that’s my style.

Good call on the interior view, I started one but ran out of time, I’ll post if I finish it up.

mCow, you could be right on the CAD stuff, of course it was not required, and if you do CAD you still can only submit .jpg’s. The same request was made in the mobile PC comp, and in the end it didn’t matter. We’ll see how it plays out, but there is a stong probability you are right and I blew a bunch of time for nothing but a core post!

tried n died. but ill try and get a rendering of my idea posted here sometime. i was really pumped about my idea, but no time to do it.

time…where does it all go??? growing up the days seemed like they went by so fast and then u always tried to stay up past your bed time…and now…you just try to get to bed before sunrise. smile…when pulling all nighters with finals. * CRAZY *

but I would like to see your sketches. I really like interiors. manily because that is where you spend most of your time with cars. but I think there is soo much you can do it it., like outsides-helps in sales…but interiors are sweeet.