My cheapo Parmesan cheese grater broke on me yesterday.

Anyone know of a good quality, well-designed one?

Mine was a cheap knock-off version of the one in the picture below. I simply can’t go back to the dried Parmesan in the green can…I think my tongue would explode. 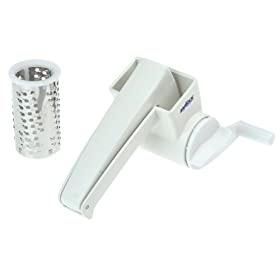 Mine was a cheap knock-off version of the one in the picture below.

Or, maybe a Graty from Vince?

But seriously, I prefer my Microplane grater… . it’s more versatile, and a lot quicker to clean. And I can use it out in the shop if need be.

I am looking for something that might be a bit…I dunno…less like the one I just broke. Does Good Grips make one?

Apparently OXO does make one:

I second the microplane. Those things are incredible!

I second the microplane. Those things are incredible!

I have to agree with this one. I tend to like the hand grater. It is a multitool and can be used for things like zest, ginger, etc… But if you do not like that here are some others. The first on is an alessi and is pretty wild. 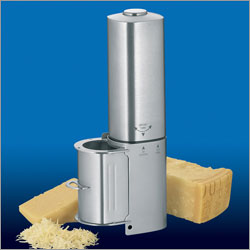 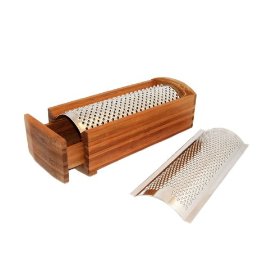 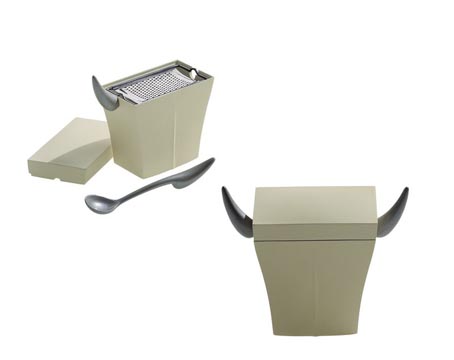 The Microplane is my choicetoo… its unstoppable. You could grate granite with that sucker.

I subscribed to Cooks Illustrated website, they have really good equipment review which comes in handy when I design some. According to them the most highly recommended grater is the Pedrini Rotary Grater : 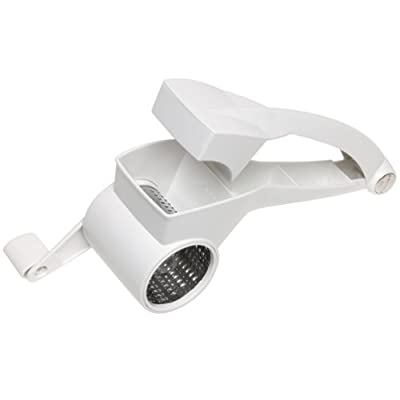 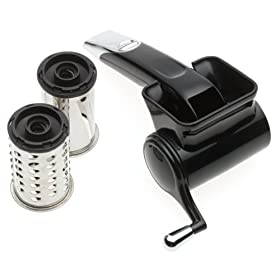 Both appreciated for their “Large hopper, sharp grating teeth, and fairly comfortable grip”

Regarding the Zyliss Grater I was the least aprreciated :

"plastic bends too much, the level of pressure is diminished and hand strain sets in almost immediately. Good for table use but bulky for storage. Downgraded for its small handle, which becomes slippery with use. "

I know you are probably looking for rotary graters this foldable PP box grater from joseph joseph is pretty interesting :

This one works really well and is from Chef’n. 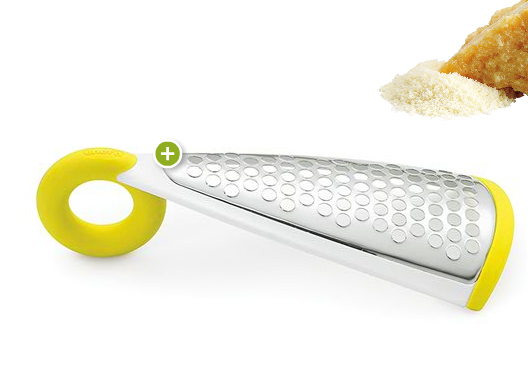 Also read this previous thread I started about how great their customer service is.

Great CS story, and also awesome because the plastic on my Microplane ribbon grater snapped in half just yesterday due to the same issue.

I tend to use a potato peeler more than a grater for my parm. Great way to put big flakes on salads, etc.

I tend to use a potato peeler more than a grater for my parm.

do do doo-doo, do do doo-doo . … shades of Rod Sterling … . I just discovered that trick this weekend!

Potatoe peeler. Will try it next time. I have a pretty simple classic one from Williams-Sonoma. Reminds me of the one my mom had growing up…

You could always try that Wahl razor on it.

For anyone that cares…it seems that I was able to split the best of both worlds…I got the rotary cheese grater that I like AND it is a Microplane. I have yet to use it, but I can’t wait to.

Bet it would do a grate

job on Nutmeg too … you do great

your own Nutmeg… . right?

Stupid question, or maybe I’m just clumsy, but how do you protect your own fingers\palm from getting grated while using the handheld ones?

you be very, very careful … and don’t grate all the way down to a stub.