I noticed a couple of interesting concepts from the Paris autoshow today:

I can’t believe how close Chevy’s WTCC concept came to the renderings released before the show. Very extreme. From the spy photos I’ve seen of the 2008 Malibu, it looks like this face will be the new one of Chevy world wide.

CitroÃ«n C-MÃ©tisse: I saw this thing on Journal Auto-Moto the weekend before the show. It is very impressive in moving images. It’s another ludicrous design, but stunning.

Check out these details:

I can’t believe how close Chevy’s WTCC concept came to the renderings released before the show.

Ah, in that Citroen, I love the start button on the ceiling. Mounting important controls on the ceiling wins in my book…there’s something extremely cool about the idea of reaching up to flip a row of toggle switches to power up your car.

Imagine sitting at a stoplight, idling. Someone pulls up beside you and revs their engine…you look over slowly and nod almost imperceptibly. You turn to to road, reach above your head, and rapidly flip a row of switches. With each one, indicator lights flicker into existence and a low whine starts from somewhere behind your back…some make faint beeping sounds, others visceral CLUNKs as louvers open and close, and large mechanical parts move around in your engine…

Yeah, I’m getting too much into this. Can you tell I really want to fly fighter planes?

NIce car, where do you find these pics?

NIce car, where do you find these pics?

I saw the C-MÃ©tisse on the TV the weekend before the show. I found the pictures through a google search, they were on an automotive discussion forum. 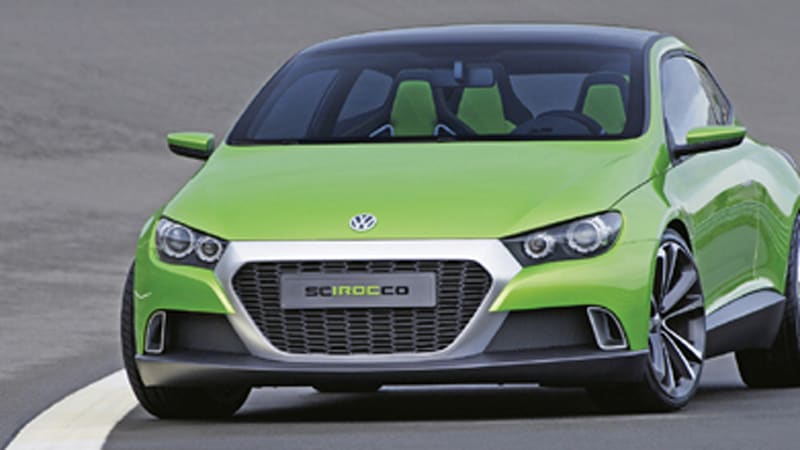 Scirocco blowing back into showrooms | Autoblog

I liked this one, its the production version of the Alfa *c. Not ground Breaking or revolutionary, just classically beautiful… and that is rare today: almost has an old RX7 proportion

The Ford Iosis was pretty mean too: I won’t bog you down with the pics, click the link…

Good to see that Alfa is still in the beautiful car business.

Now this begs the question, when will Alfa return to the USA?

I know, every year they say “we are coming back to the US in 2 years…”

Ironically it is on the cover of this month’s Automobile magazine with the title: Coming to America… I didn’t think it was going to be 200,00k though, I was thinking more in the 60-75k zone…

The issue has some nice write ups of the the Paris show BTW. Their new editor wants to focus more on design and they have some short interviews with some designers in the issue…

…to me would be good in the 10k area…Maybe for me it would be better a 207 or a Corsa…
8C is really a supercar, imagine that Glickenhaus (or whatever it’s written, the Enzo based Ferrari P4/5 owner) ordered it at Paris show while showing his pininfarina custom…just like i buy itunes songs…
If you want to stay with Alfa Romeo, the Brera is quite interesting and less expensive. But they don’t sell it in the States…


Automobile mag…thanks for the hint…
Mike, do you speak/read italian?

I see that they are billing the 8C as a super car, and it is very fast (0-100km in under 4 seconds), but it is based heavily on the Maserati GT coupe which is a much cheaper car (but no wear near as beautiful and of course not carbon fiber either)

Unfortunately I do not speak Italian anymore. As a boy my grandfather lived with us and I’m told I spoke Italian well then, but sadly it is all gone now…

I work with an Argentinian. Down there, Alfas are still sold and popular. Although, when I told him the price for the 8C he started laughing. “Why would anyone pay that much for such a piece of @$#*?”. Seeing as that was the reaction of Americans the last time Alfas were sold in the US, it will be interesting to see if the trend continues.

I read most of the 8c’s are pre sold. First dibs went to owners of the original 8c (of which I think there were less than 150 made). I think there will only be about 500 of the new 8c produced with only 1000 coming to the US… simple supply and demand. Keep the supply super low (below your low demand), generate lots of brand buzz, and then bring in the volume stuff next year (maybe)