I’m in a bit of a pickle. It’s my parents anniversary in 2 weeks and I hadn’t so much as put a thought into what I was going to get them. Luckily over dinner the other night mum briefly mentioned Eames chair so I’ve decided that I’m going to be clever and surprise them with that!

Only problem…it’s the first I’d ever heard of an “Eames” chair!

Hope you’ve got a deep checkbook…

Just about to jump into bed…will have a detailed look tomorrow!

Thanks for that NURB!

I would guess, that the “Eames Chair” hint was meant for Your father, don’t You think?

you can also try Ebay. I found some for a much cheaper there, used of course but still in good shape. Here is the link:

That Ebay example is a new Chinese knockoff, and at $800, the seller is making a mint on it.

That Ebay example is a new Chinese knockoff, and at $800, the seller is making a mint on it.

Sorry did not look to closely. I did see some older ones that looked to be worn that were a bit cheaper. That was my point. Scott is right, make sure you are getting the real deal.

or check out Modernica ( http://www.modernica.net )
Not what a design snob would call the “real deal” but close enough if your parents aren’t to much concerned with the fact that it HAS to be an original Eames.

I don’t think they are that bad in terms of quality and the pricing speaks for itself.
If you have to go to Herman Miller (or Vitra) for an original licensed piece, it will set you back a crazy amount.

Thanks heaps for your suggestions.

mo-i, I think you may have hit the nail on the head…dad would absolutely love that exact one! I can already picture him relaxing in that chair in front of the TV (beer in hand

The one for around 3K on the website that NURB provided is wayyy out of my budget…I was more hoping for something under a $1000. Is that wishful thinking with this sort of furniture?

for under 1.000 you might be able to find a “recreation”, but the ones sold
over here in Europe are only shadows of the orignal ones.

There are illegal replicas, that for a long time have been made in italy, which
have more of the substance of the orignals but they were around 75% of the
price of the originals, the last time I saw one.

Personally I would never aquire an imitation. No matter what. No fake Rolex or
Nike shirts. Because I wouldn’t want my own fruits of labor to be faked.

(and since some weeks the first one already is…)

I uesed to get a lot of 50’s modern classics on Ebay for amazing prices… there are a lot of “modern” furniture stores around that sell on there, and in some ways its very cool to get the original product, not some reproduced version.

Saarinen, Eames, Bertoia, Nelson, Breuer, etc. they can all be found on ebay and often for under $500

My brother and I just gave our parents money to take the cruise of their choice for their 40th anniversary. Presented it in an engraved frame. They were thrilled.

PS, for a “designaholic” you should really know about Eames! Or is your condition so serious that you don’t remember things?

On my mother’s 75th birthday (considered the “silver” anniversary) I rounded up 75 US silver dollars and packaged them in a heavy cardboard tube (about the length of a paper towel roll) which just happened have an inside diameter that matched the coins. I had to go to five banks to collect them all.

It weighed a ton, and the shape rendered it impossible for her to determine what the gift might be. Increasing the agony, she pondered it for two weeks waiting for the big day to arrive. She jokingly (I think) asked me if I had given her a bar of steel). After she opened it she had so much fun spending the $75 one at a time, including a story with whoever she was purchasing something from, about how she came to have so many silver dollars.

I had given her all kinds of “designerly” things over the years (she was fond of IIttala glassware) but she talked about this for another four years until she passed on; I still have six of those coins, so I know she remembered that day every time she looked at them. Maybe she couldn’t bring herself to spend them… …

The monetary value isn’t what counts. Why don’t you design and build something they can remember for a long time; it wouldn’t have to cost a thousand dollars.

Thanks for info mo-i. I think I might have to go with a “recreation” as you call it because I simply cannot afford the original. I guess for me what me it comes to is quality vs. value for money.

Travisimo - thanks for eBay tip…definitely going to check it out.

cg - haha, you’ve caught me out! I’m only a “designaholic” by name and not by nature. I was trying to be clever when choosing a name. Looks like its gone against me!

Lmo - thanks for the story, that was awesome! I’d love to be able design and build something myself but I just don’t have the time…maybe next year!

Oh cool, I’ve done the same thing with Golden Dollars for a wedding gift, presented in a cloth bag! Definitely a lot cooler than writing a check!

I received “100 golden wishes for good fortune” for my wedding (100 dollar coins). When I took them and some other checks to the bank to deposit, turns out it was only $85. I got short changed 15 wishes from the gift giver!

It’s probably those extra 15 wishes that make the difference!

Thanks for all your help. I’ve finally come to a decision and put my order in (just in time I might add)!

Since I live in Australia I chose to go with an Aussie company called Milan Direct that specializes in quality modern furniture reproductions. http://www.milandirect.com.au

After much research checking out other furniture stores, I went with these guys simply because they ticked all the boxes: chair looks brilliant, price is even better and the unexpected (and fantastic) customer service the lovely people at Milan Direct showed me was a breath of fresh air and something I did not experience with the other stores I contacted. Kudos to them!

Now my friends for what you’ve been waiting to see! I took this picture off their website. Chair looks awesome huh…Dad’s going to LOVE it! Bet you can’t guess how much it cost me! What do you guys think?
http://www.milandirect.com.au/shop/eames-lounge-chair-and-ottoman-reproduction-black/ 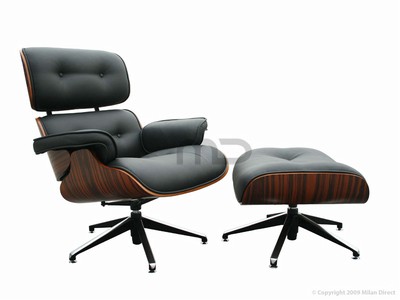 the prices are indeed incredible.
maybe because Australia doesn’t have all those licence issues that Europe and the US is plagued with?!

is Australia a knock-off eldorado?

bepster, they sure are incredible! What’s a knock-off eldorado?

Ohh, and guess what? THE CHAIR ARRIVED TODAY!!!

Mum and Dad are beyond thrilled…the perfect gift!