Is Porche risking offending the purists by building a sedan?
I really question the Crossover path they took, but what’s next, how far can they stretch the brand before people rethink what Porche stands for?

yeah the Panamera looks like a sedan squeezing into a Porsche. from a really close front 3/4 I was thinking it wasn’t half bad, but that @$$ is a little heinous. I feel like Porsche is so literal and restrictive with their overall design language that it doesn’t allow each car to look the best it can. It seem rather than take the approach of what would a Porsche Sedan (or SUV) look like they say, okay let’s turn this Porsche into a Sedan (or SUV).

My thoughts, just slightly better than the Cayenne. I think Porsche is going to regret these adventures someday. Already, Cayenne sales have plummeted (outside Russia). Then again, I owned a '70’s Porsche so I don’t think I’m their customer anymore. Maybe they can keep this gloss of being a serious maker while making weenie trendy machines.

My thoughts, just slightly better than the Cayenne…

agreed, but I think partly cause it was an easier more straightforward
“squeeze”

I am interested to see if the Cayenne and Panamera do negatively effect the image and brand image of Porsche long term as I think many of us are speculating. Would/could be a nice case study to have as reference when a client or colleague wants to “branch out”

Is Porche risking offending the purists by building a sedan?

I’m not a purist, and I’m offended!

I thought Porsche jumped the shark with the SUV, but this is rediculous.
It looks like one of those funny photoshop mash-ups on Worth1000.

It looks like one of those funny photoshop mash-ups on Worth1000.

The last ten years, I keep remembering LJK Setright’s comment on the Jag S-type: a short term success that will lead to long term failure. LJK was wrong, the S-type was a short term failure too, the Cayenne seems to have worked out for Porsche.

On the flip side, I’ve read the next gen Boxster will have a four cylinder turbo in the base model. Weird.

Lastly, maybe GM should follow the Porsche plan, seeing as Porsche is the most profitable car company. GM can just graft the front of the Corvette to everything else they make. Corvette-Avalance, Corvette-Aztek. A sure hit!

A couple years ago they bought back controlling interest in Porche-Design and closed the Cali office. Mostly because they were putting the Porsche name on everything from binoculars to diswhashers.
…but now it looks like they might be cashing in again.

I love Porsche’s and probably always will. My dad had (and still has) a tangerine orange 71’ 911 that is just fantastic to look at and ride in. I love Porsche’s.

But the Panamera just saddens me. The front, front 3/4 and side view for the most part are nice enough, but that tail is just horrifying. My stomach drops every time I see it. With every fresh spy shot that’s come out over the last year or so, I’ve kept my fingers crossed that that it was just body obscuring cladding or camo, that the production car would have a sweeping graceful tail…but no.

I’m already looking forward to the next version.

Is Porche risking offending the purists by building a sedan?

I’m not a purist, and I’m offended!

I thought Porsche jumped the shark with the SUV, but this is rediculous.
It looks like one of those funny photoshop mash-ups on Worth1000.

WHO is RESPONSIBLE for THAT ?!?!

As you all know I like the classic Porsche designs and history, but yet to some extent I don’t see a fundamental branding/positioning issue to expanding beyond the traditional rear-engined coupe. I think the execution however, is key.

From my perspective, the Cayenne works. Stylistically it’s very connected to the Porsche look in both front and back, and it delivers in performance as well.

The new Panamera, however, not so much. Stylistically alone it does look like a bad photochop to me. And it’s not even that a 4 door “coupe” is impossible to get right. The MB CLS is great. The Quattroporte is OK. The Lambo, I don’t like and I think is an equal abomination, but those Lambo Italians are kinda nuts anyhow so maybe…

As has been said, the front is OK, the side is wacky, and the rear is just…um, wrong. I can see all the Porsche “bits” in there, but they seem to be haphazardly applied. Cayenne rear shoulders, 911 lights, Cayman rear lights…

Just doing a quick google search I came across the following- 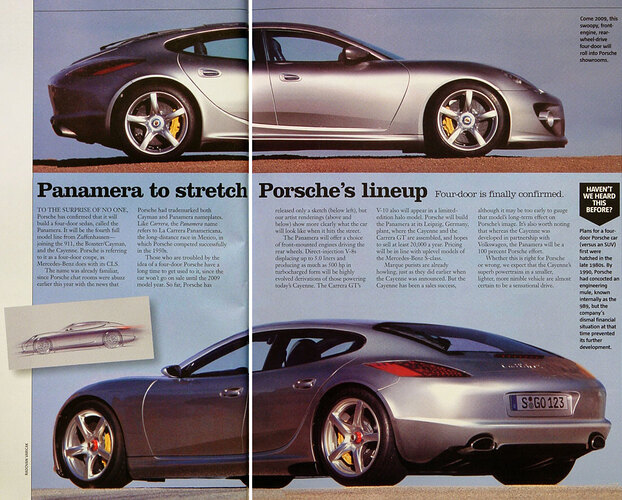