At work we launched a kickstarter campaign for a product that we developed in house. Its called the LooLedge, its a toilet paper holder that comes in a variety of styles that provides a space to rest your smartphone when its not in use.

We are looking into getting attention from newspapers and local media, but would it help to use another service? It looks like there are services that can help promote kickstarter projects. We’ve found:

Would it be helpful to use such services in addition to our marketing?

Please check out our campaign! : The LooLedge by Axis Design — Kickstarter

Post your process if you are interested in getting any feedback or comments. Just posting a KS campaign not look on well here on the core77 forums.

Our video mentions our process from ideation, to CAD to prototype. I can definitely elaborate on our process on this forum.

Post anything you want people to see here or you likely won’t get many following blind links or reading anything.

“Studies have shown that 1 out of 5 people at some point in time has dropped their phone into the toilet” according a to survey conducted by Plaxo. My boss and his kids have experienced this problem before and a few of my friends have admitted that they have dropped their phone into the toilet. With more people bringing their smartphones into the bathroom, phone accidents are becoming more common.

With some downtime around the office, I started to brainstorm some ideas on solutions for this problem. 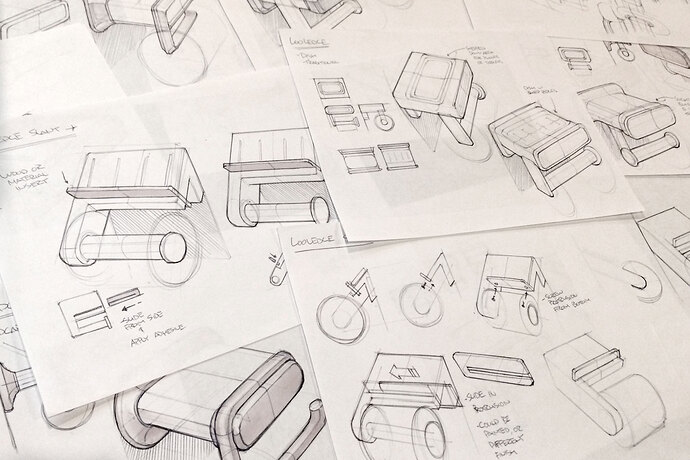 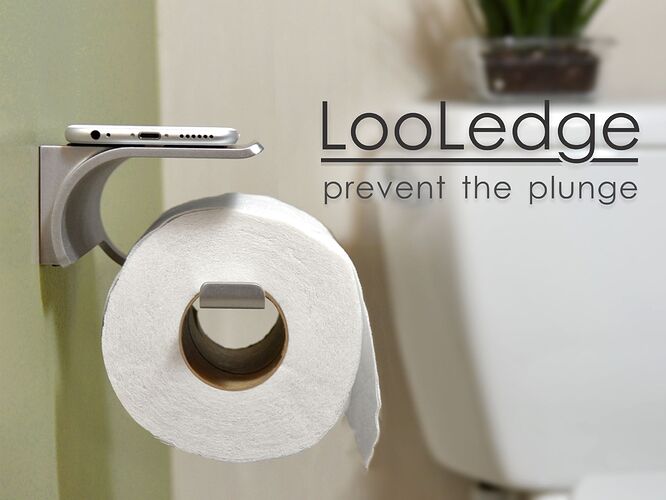 We noticed there have been some ideas floating around the internet for some solutions that are more akin to a “shelf” or specialized holder that you stick onto any surface. A solution like that stands out within the bathroom environment, which is why we wanted to integrate functionality into an existing product. The best product thats within arms reach of the user, would be the toilet tissue holder.

I sketched ideas around how we could integrate holding a phone within a toilet tissue holder while still looking like something that blends in with the rest of the bathroom decor.

The first two directions are a little more modern. The top sketch represents the idea that hooked feature that holds the toilet tissue is the endcap on the holder. The second sketch represents a direction thats more simplified, capturing the function within a “C-shaped” profile. 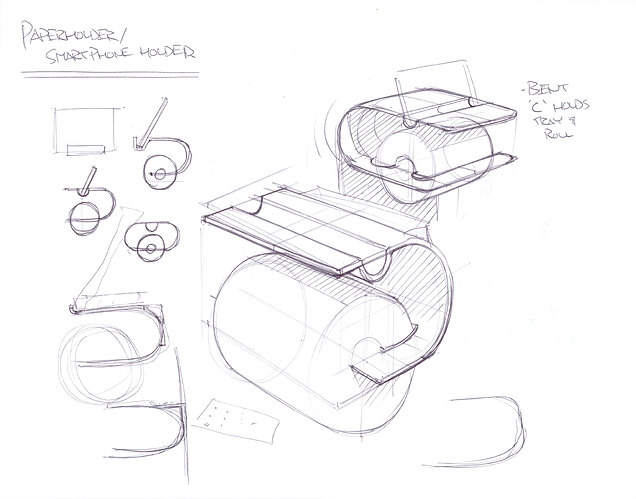 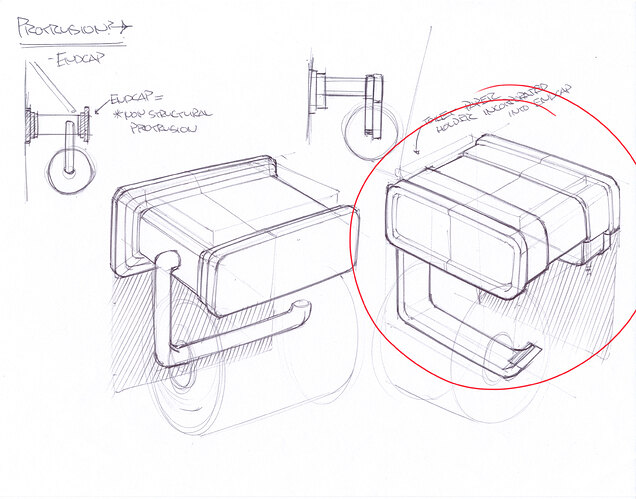 The third direction is the most modern looking out of our designs being a toilet tissue holder with a slanted, angled down profile. The last direction is a more traditional offering. 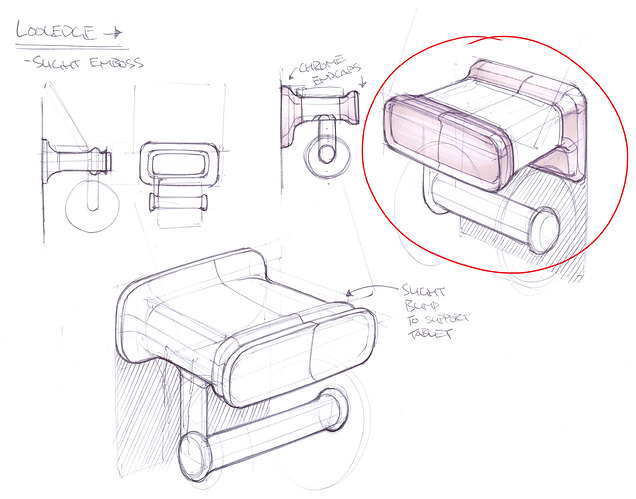 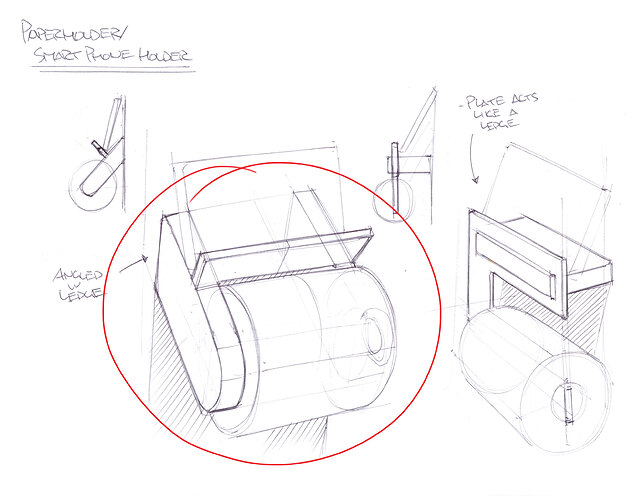 After we settled on some directions we then proceeded to refine them in CAD. I did the initial modeling in Solidworks, figuring out the proper dimensions and making sure that it will work with both the standard toilet tissue roll and most cell phones on the market. Considerations were also taken to how the design will accommodate a mounting bracket and manufacturability. 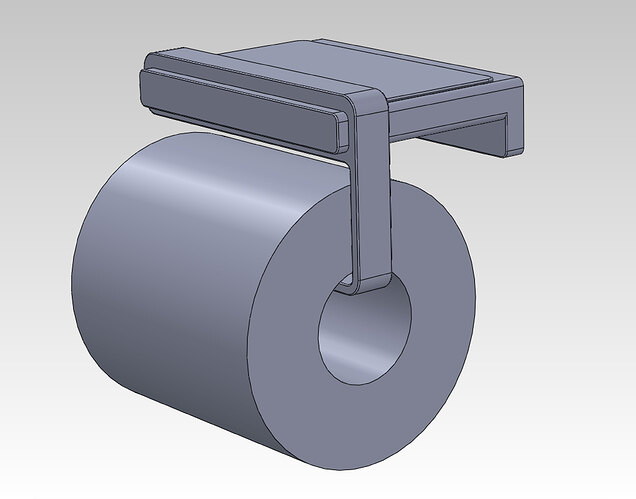 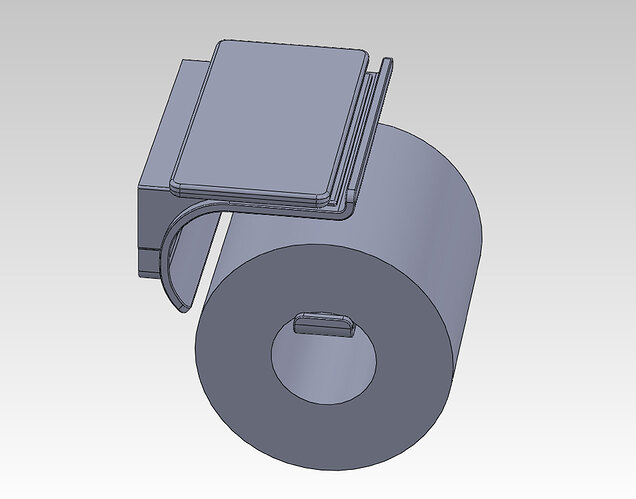 The later CAD phases were taken over by my boss, who modeled everything in Creo/Pro-E. The slanted design was modified from the original sketch to better accommodate toilet tissue rolls and became more angular. We also added a feature for the resting edge to be customizable. The initial direction will be to combine a shine chrome finish with a bamboo ledge. The more traditional direction was slimmed down considerably compared to the initial sketch. 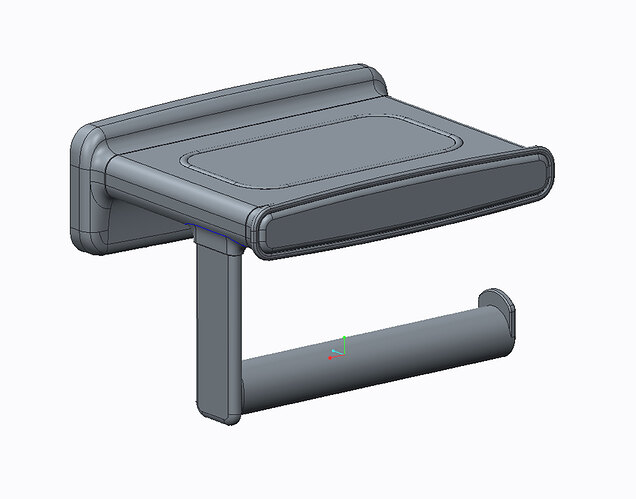 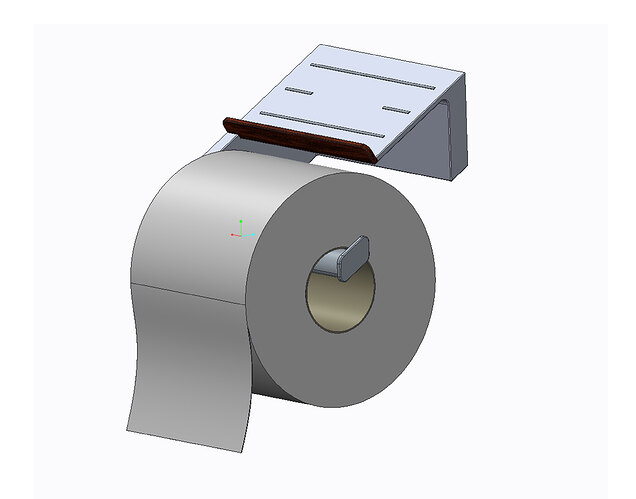 The final prototypes were made in house by our prototyping facilities and were CNC milled out of aluminum. The final production models will be cast and then appropriately finished. 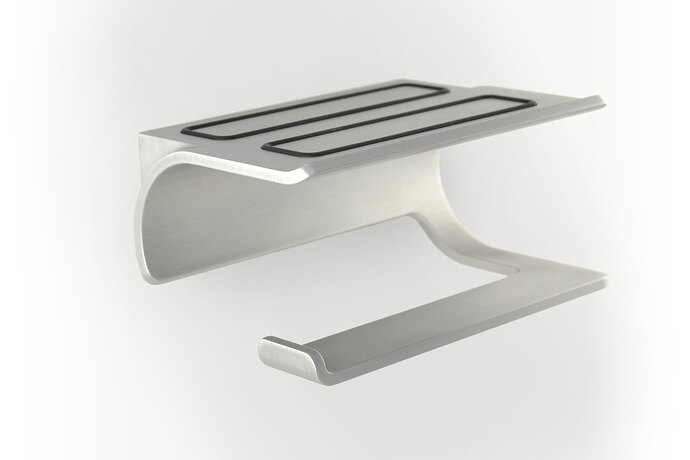 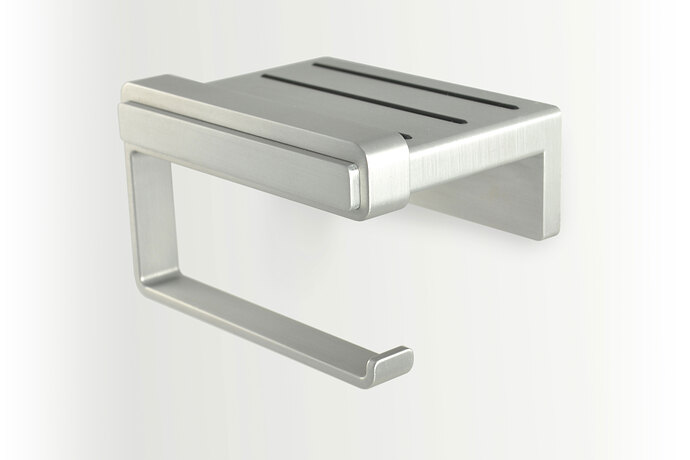 Through our efforts we produced four unique designs, that all provide a space to rest your phone while you’re taking care of business. Hopefully with your support we can get at least one of these designs into production! 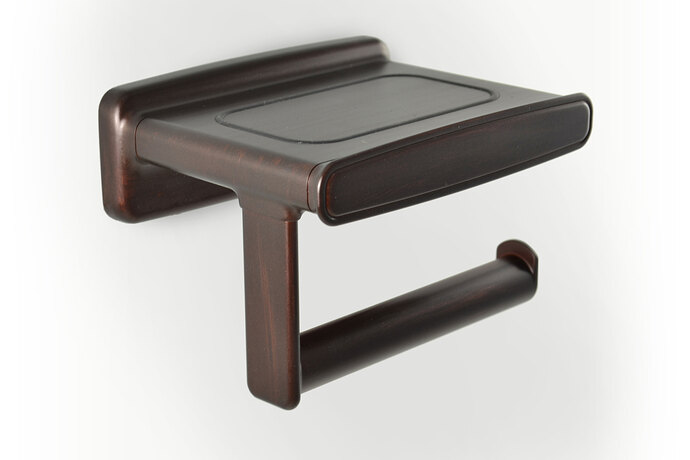 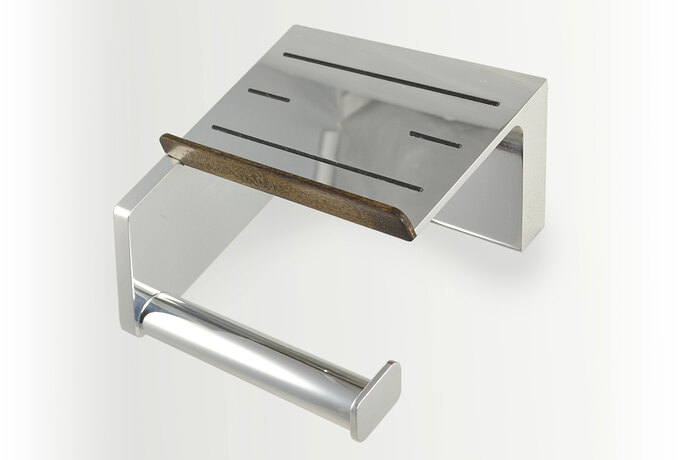 I’ve never run a kickstarter but have a couple friends that have and they have had success with submitting their projects to design blogs/related industry blogs around the time of launch. Almost all blogs have an email where you can submit potential content for them to review. The key obviously is that the content has to be relevant to their site and interesting enough for them to want to highlight. I’d focus on targeting key ones that you think have the type of consumer you’re looking for.

Reading through the descriptions of what these social marketing services provide, they all sounds pretty generic. It would probably be more worthwhile to reach out to someone who’s run a successful kickstarter, buy them a beer and pick their brain.

On the topic of the project itself, I’m still scratching my head why you guys would need $150K to tool up for a product like this? That seems like quite an aggressive target, no? Unless there’s something I’m missing like these are all CNC milled out of aerospace grade aluminum in the USA?

Also presenting 4 options and then saying that only 1 will be made (unless you hit a HUGE stretch goal) is probably a huge deterrent to people committing. Let’s say Suzy likes the Bronze finish but knows that most people probably won’t, she’s not going to fund it knowing she might not get what she’s paying for.

Thanks for the feedback guys! This is my first time being part of a Kickstarter campaign, so its quite a learning experience. My boss is pretty firm on the pricing for tooling/shipping/packaging/logistics a 5,000 unit run. I may have to do some more research on my end for cheaper manufacturers.

One thing that we really need to change is our pledge strategy. We agreed that many people are afraid that the wrong design will get picked, so we may have to conduct an informal survey on which is the most favorable design and just stick with that one.

As far as marketing, I’ve been constantly emailing design and bathroom blogs. So far, we’ve gained the attention of a few people and have been making some progress. I’m not sure what the outcome of this campaign will be, but I’ll still put in the effort and see what will happen.

Seeing that there are some products out there that combine a shelf and toilet paper holder, what is it that you are patenting?
Agree with the options. Having 4 different looks seems to water down the concept idea. I think it would be easier to target one sku first and make it your flagship product rather than trying to offer 4 different ones from the beginning. It will also be easier to promote one distinctive image across multiple blogs.
Since it involves tech, I think it can have its own style rather than try to blend in with the decor (at least at the beginning).
Good luck.

150k is a pretty outrageous funding goal for a tiny product like this. I wonder why you guys chose that route? You could easily make an attractive version of that idea out of a few bended metal pieces done locally around the corner for a fraction of that cost. Why a production run of 5000 for a product you don’t know the demand of? It’s almost like you don’t want to be funded unless you go crazy viral (which I think is unlikely because I think you guys come off as way too serious for such a topic… “mobile technology and bathrooms are not really designed for each other”… srsly?

I designed & fabricated an number of pieces for a bathroom remodel of a cocktail bar some years back and did something very similar. I added a small integrated hook for a purse or handbag as well: http://www.prxs.xyz/portfolio/washroom-language/ 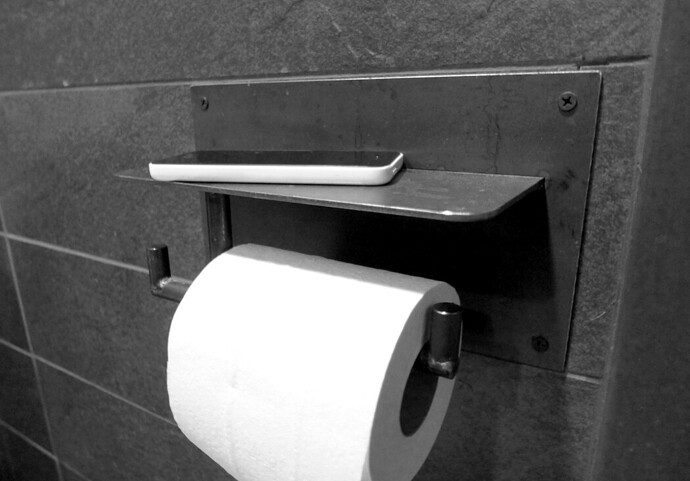