Some of you might remember Danny’s (PooK) awesome thread about some of the track cars he has been working on:

non artistic type in over his head! transportation

Hello, I’m not a designer so to speak, but I do play one at home

…Anyway I’ve been working on a reverse trike project (I know, it’s one of THOSE guy’s again)

I wouldn’t ask but my gearhead friends are no help! So I thought I would ask some experts. I can build anything I can see but just can’t wrap my head around this one. I’ve taken it from a drawing to a model to an almost ready for the road prototype but am having the worst time ever on a few parts of the body and while…

He and I have been chatting over email and phone over the past few months about a more fully bodied version of one of his vehicles, and we thought it might be cool to post what we have so far.

Below is what Danny gave me as a start: 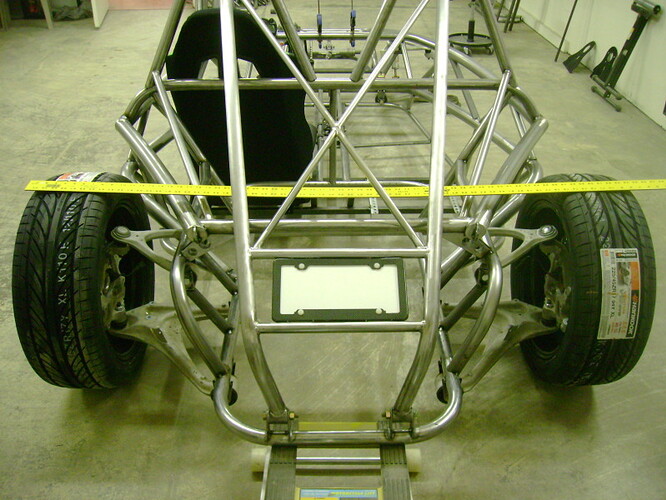 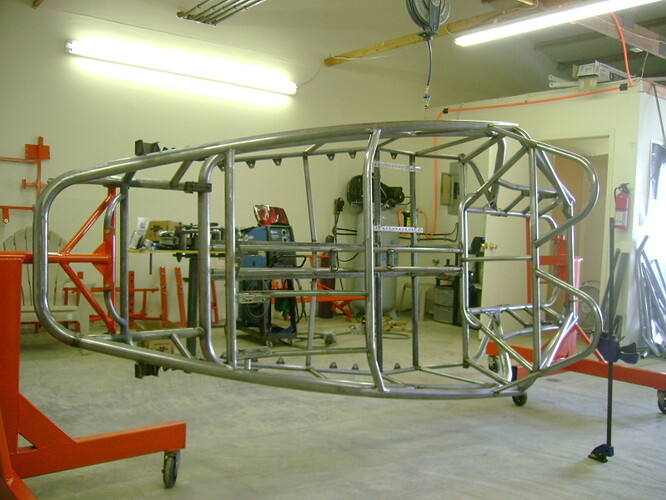 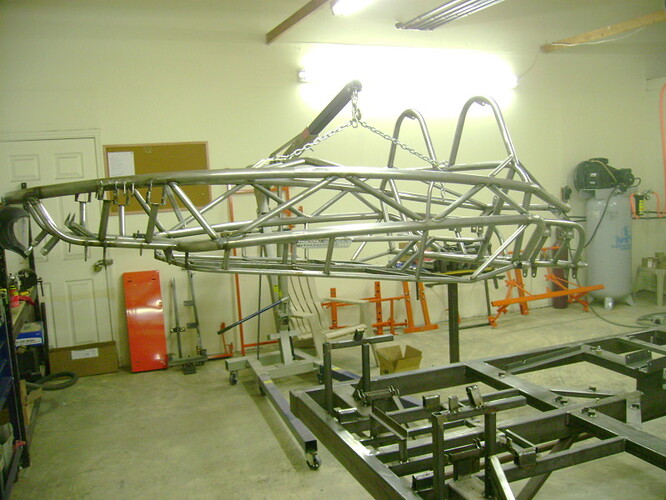 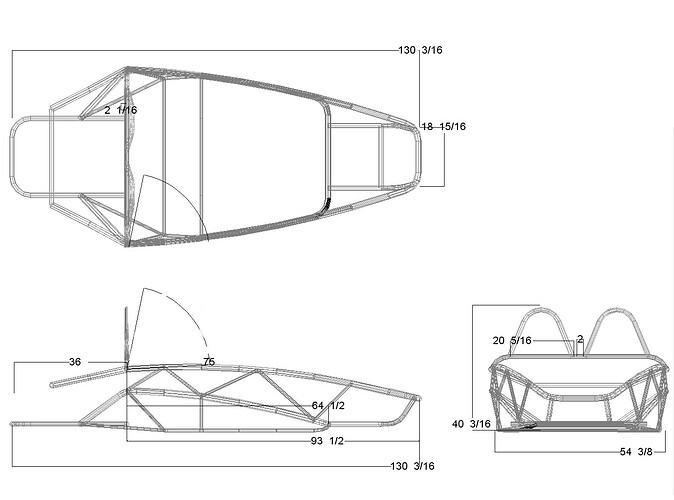 We talked about the vehicle having a “folded sheet metal” look, like older Giugiaro designs (Lotus Esprit, Delorean, Scirocco) as a way to differentiate the vehicle from the over vented, over winged, uber aggressively sculpted track cars on the market. For his manufacturing QA purposes this was also a way to help control surface integrity.

My first step was to start pulling together inspiration images of things I felt did that. I also started thinking about Danny’s brand, which is called Matrix, and I wanted to play with this as well. 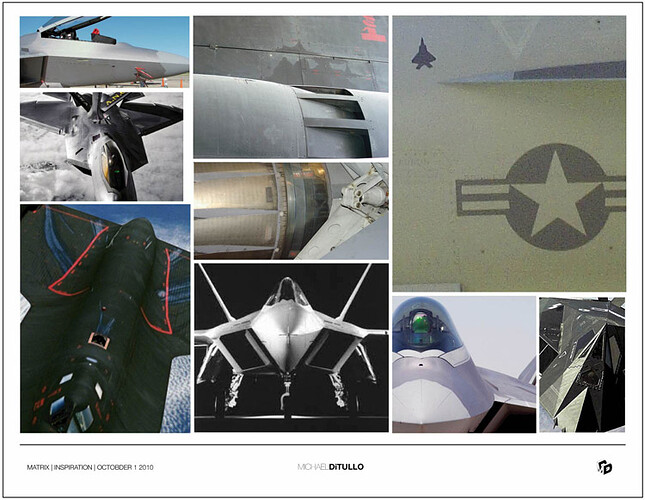 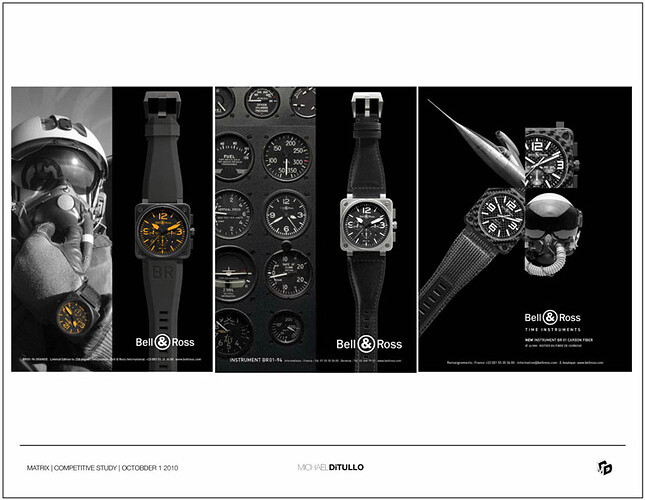 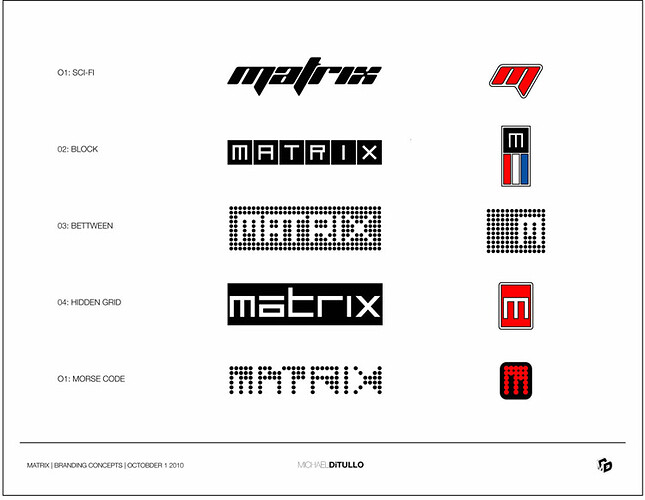 After some further conversation with Danny and his business partner, I started to put pen to paper thinking about some of the constraints and where we wanted to take the visual theme. You guys know I’m slammed at the studio, and I travel a lot, so these sketches are often on airplanes, or hotel rooms when I get a free moment: 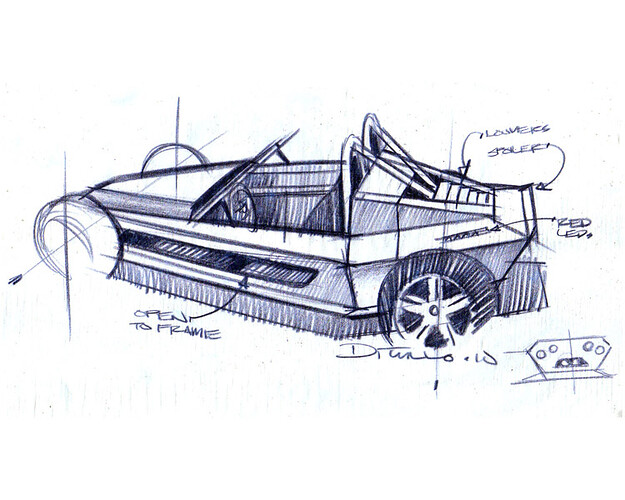 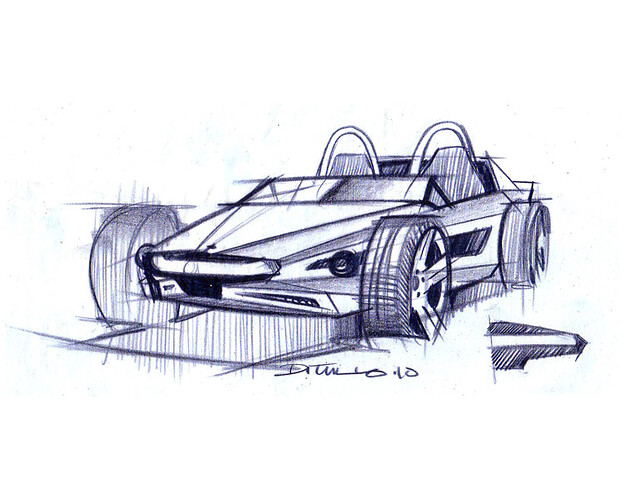 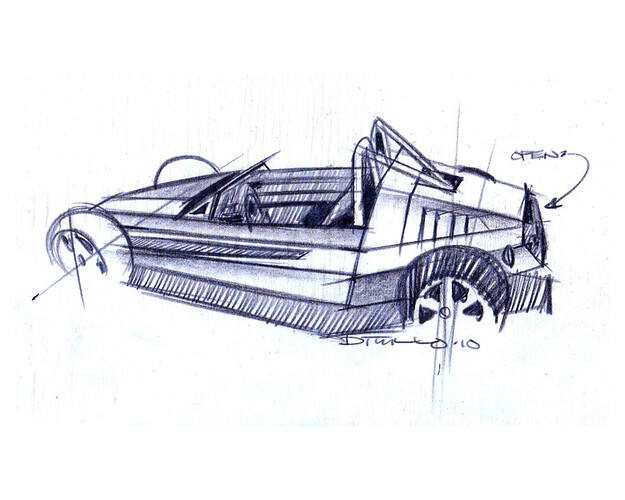 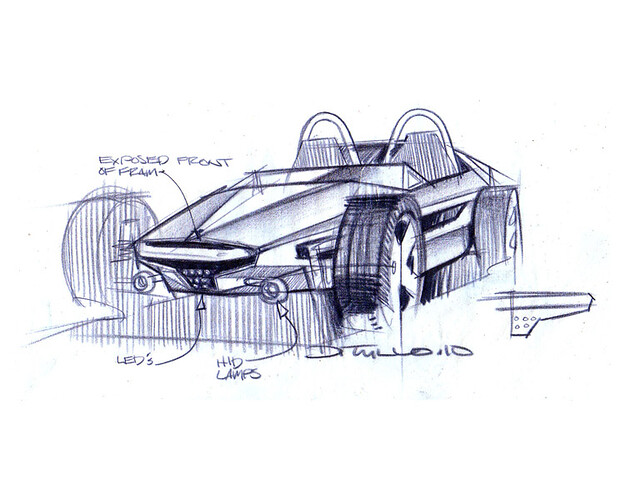 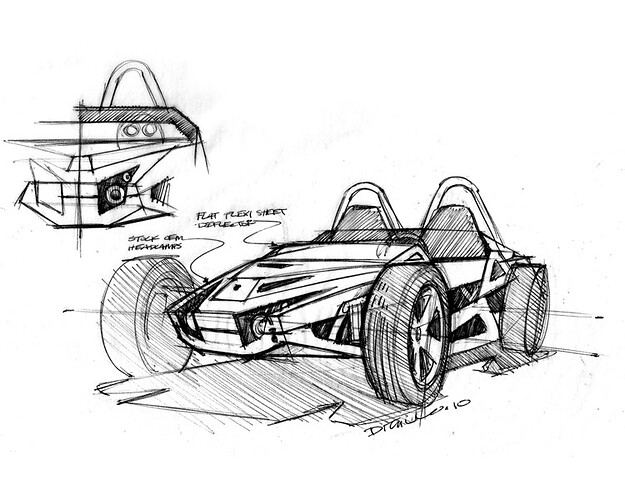 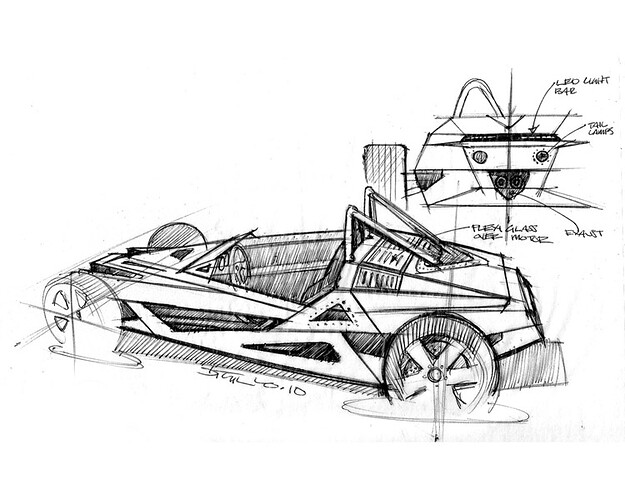 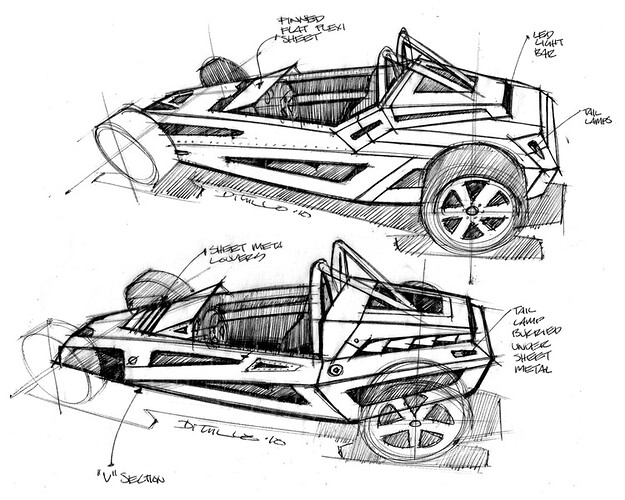 A couple of conversations later we were feeling good about the overal feel and I wanted to take the fidelity of the drawings up a notch. I began researching possible components such as OEM front and rear lights and wheels, overlayed Danny’s CAD in Illustrator in all views to scale, and began sketching the design in. 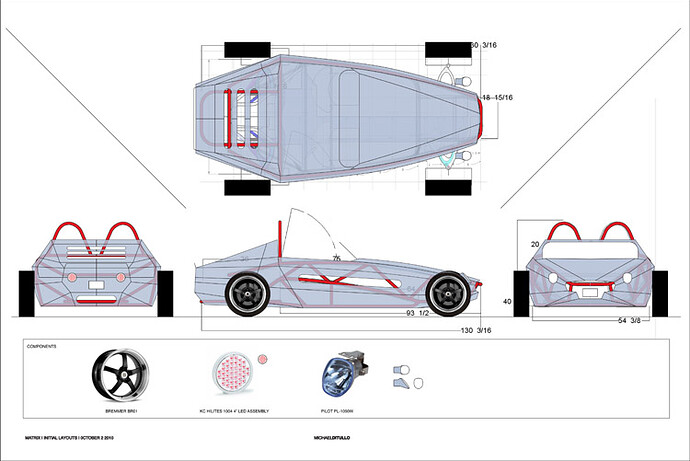 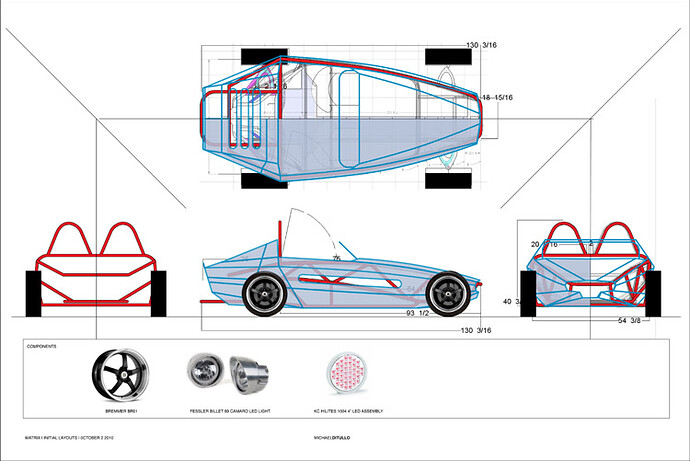 A few more tweaks in Illustrator and I was pretty excited to see our little origami like open wheeled racer rendered up, and this is where we are at the moment. Taking a step back and thinking about it… 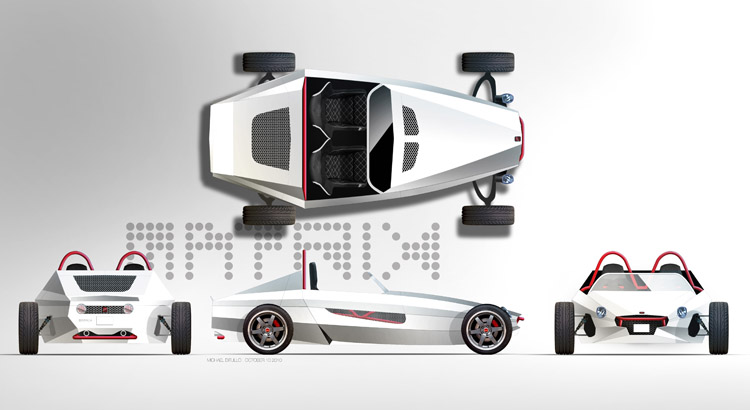 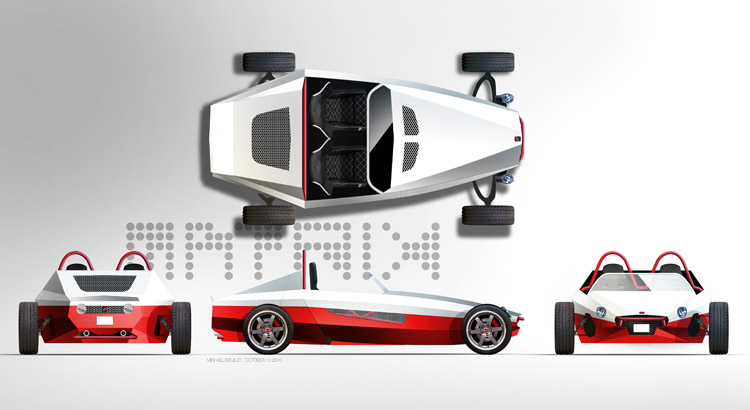 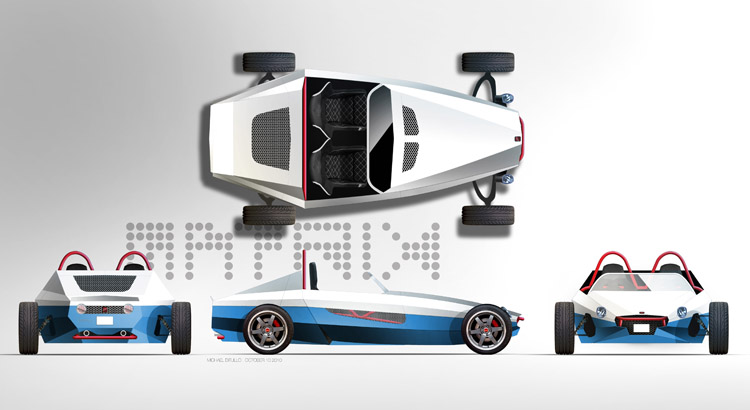 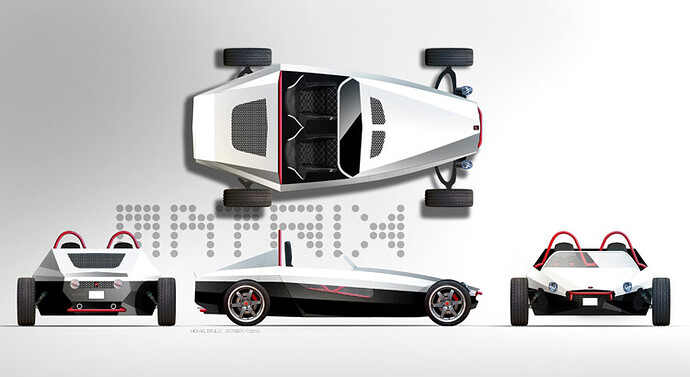 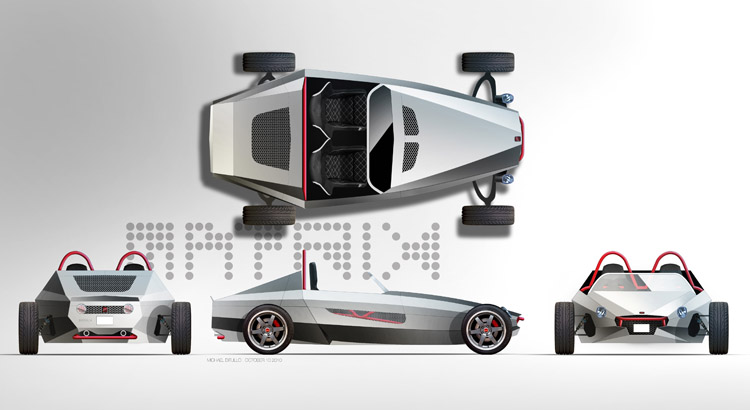 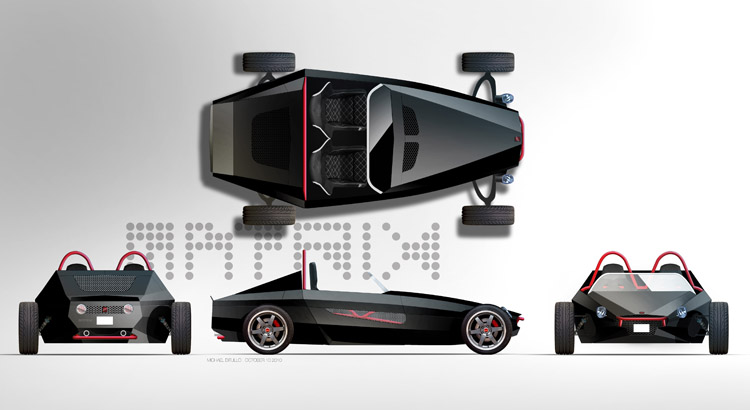 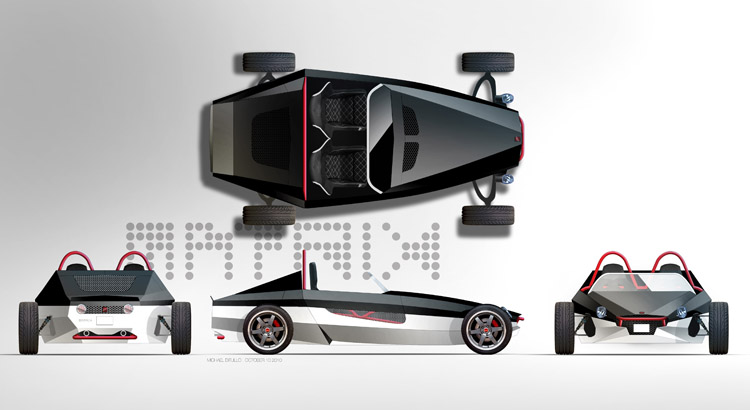 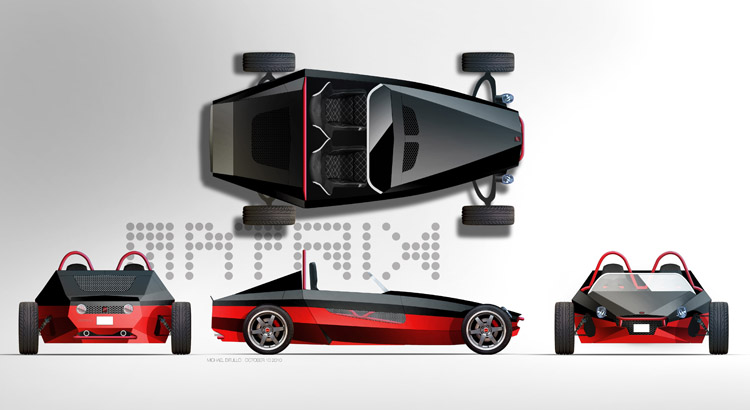 Thanks man. Your right. Definetly some Bertone in there. That is the era we were referencig for sure. Maybe a little too "Smooth Criminal"though? Maybe a couple of smooth transitions would help it feel more cohesive… Like newer Lambo’s… We’ve also talked about adding some more form to the engine cover to articulate and strengthen the surface as well as pick up the double hoop roll over bar form a bit.

I think the two tone could be very nice for the track. I also like the idea if always calling the frame out in a contrasting tone. A black car with a white frame could be killer.

I’m almost thinking of taking a step back and working up an entirely different approach.

Awesome stuff Michael! I’m really looking forward to the lower air-intakes in front of the rear wheels, it looks like they’ll have a nicely aggressive angle.

Looking at the sketch phase, I think i personally prefer the front and rear of concept 1 over concept 2. It’s just a little bit more out there. And there is some great stuff/detailing in the untitled2 sketch. As a final note, why did you go with the rounded vents and side cut-out?

Nice work, Yo…
All Brand concepts are interesting …my favorites are morse, block, hidden grid…but block & hidden grid (& logo) look more automotive…for this category.
Nice sketches & concept presentations… I like the idea of showing structure through the door panel…

Nice start Yo. I really like concept 1 and 2. The rear view of Concept 2 captures the feel nicely. The AI linework though loses some of the emotion and nuance.

I do agree that some “twisting” or “crisp to soft” transitions between the surfaces would add some drama to the form.

The two tone colorways look great. If fabrication is driving the relatively simple, single bend, surface construction, having the graphics traverse the creases might be an good way to add drama. Like how sport bikes have pretty simple body work, but crazy graphics. Simple body work here, with tasteful applied graphics could go a long way in itself.

I just noticed the concave beltline band. I like it. I might see how that looks played up more. I think it’ll look good. Maybe a “top cap + bottom cap” visual structure?

I like the vent detail in front of the rear wheel. It almost starts to hint at there being two form that are being pushed together, front to back. That could be another interesting form metaphor.

I’m rambling now, but I think there’s a good opportunity at the front and rear to establish an iconic “grill shape” with the way the spans all come together. It’s a little reminiscent of an upside down Aston grill right now. Combined with the prawn eye ball headlights, I think there’s a really nice front end graphic brewing there. It’s starting to get there in the concept 1 and 2 sketches.

A few years back I read Build the Perfect Beast, which details the story of the Nick Pugh’s Xeno project.
Here are some of the images of the Xeno III
http://archive.cardesignnews.com/news/2002/020415xeno3/index.html
It might take some searching but you can see more of a development here.
http://nickpugh.com/main.php?x=287306504

Seeing many of these planar surfaces reminded me of the point in the Xeno project when the design shifted from a highly compound-sculpted aesthetic of the Xeno I and II to the more faceted planar design of the Xeno III primarily due to low volumes and the cost of achieving the more compound panels from either tool or manual process.

If I had to make any real criticisms at this point it would be that:
+I am not sure some of the roundness I am seeing in the chassis reveal reflect the hard edges and geometric construction I see elsewhere.
+I would also agree that the AI loses a lot of the emotion and character of the sketches.

Love to see this stuff man, keep us posted!

I think I may need to use this line in my next design critique. - “It’s a little too Smooth Criminal”…

Is that even possible?! - that’s like saying Hoth is too snowy.

I think I may need to use this line in my next design critique. - “It’s a little too Smooth Criminal”…

Is that even possible?! - that’s like saying Hoth is too snowy.

Yo: thanks for posting this. It is really great to get a taste of the method and inspiration that is going into the design. I really love how you are playing with exposing the frame through the skin of the car.

For your inspiration you reference jets; the thing that I have always loved about jets are their mix or curve and angularity. On your design you have gotten the angularity down, it would be nice to see some of the jet’s curves incorporated as well.

Again thanks for posting, and a black car with white frame would indeed be sweet.

Very nice concept work, Michael. By any chance do you happen to have any of your brainstorming/ideation pages you could post. Also, what was the paper size you did this on? I tend to find that sketching on larger newsprint pulls out a whole new level of forms. It is limiting as you can’t really fit the 18x24 on the scanner bed, but it does make for great pastel work. Any chance we could see a old school Vis-Com rendering of this car in pastel and guache? I know probably at this point I’m being selfish but it makes for great eye candy…

Really cool Project, love the concept sketches. I see a bit of Aerial Atom in there, really digging the exposed frame powder coating it would be awesome and give it a Ducati Monster frame feel. Two tone would be great, really slims the profile, maybe some solid graphics (circles squares) to place numbers on? Most track day events have you place numbers on the car so they can be identified on the track.

What material is the body going to made from, sheet metal, composite, plastic?

What drivetrain? It looks like a horizantal I-4, this could lend to a real cool exhaust detail (big horizantal muffler)

Also is this version a dedicated track car or will it be street legal? I ask this because I wonder about the need for head lights (you need the brake lights to be ont he track) and I think the ability to flip the windshield down or remove it (MG TD style) would be awesome and cover the passenger side with a panel for solo sessions.

Awesome stuff, excited to see how it turns out!

i REALLY like the 02 and 04 logos. The hood ornaments look slick and very suiting…

Inspiring stuff all together, especially since the passion from both parties shines through.

I’ve been a long time fan of the Lotus super 7. I got to drive a Berkin one a few years ago, with a ford Z-tec motor. It had some get up and go. Will the suspension be liner actuated or strut mounted? It would be neat to see some clip on fenders.

Thanks for all the responses guys, good feedback… I’ll post something more intelligent later… hammer busy at the moment…