One sheet every weekday (hopefully)

I’m a working mid-level product designer in the UK, and have always just ‘got by’ with my sketching ability. I would like to improve, so I’m starting this thread to spur my dedication and have people provide feedback on my weekdaily sketches.

I’m planning to come into work an hour to an hour and a half early each day (hence weekdaily sketches), sketch for as much of that time as possible, and post the results here and hopefully improve over time with your feedback.

On today’s sheet of bike-touring focussed GPS units (attached), I stuck to lines and no shading. I have plenty of observations on what could be improved with this sheet; perspective, proportion, poorly placed shadows, etc. but if anyone has any thoughts on how I can look to improve I’d appreciate it. 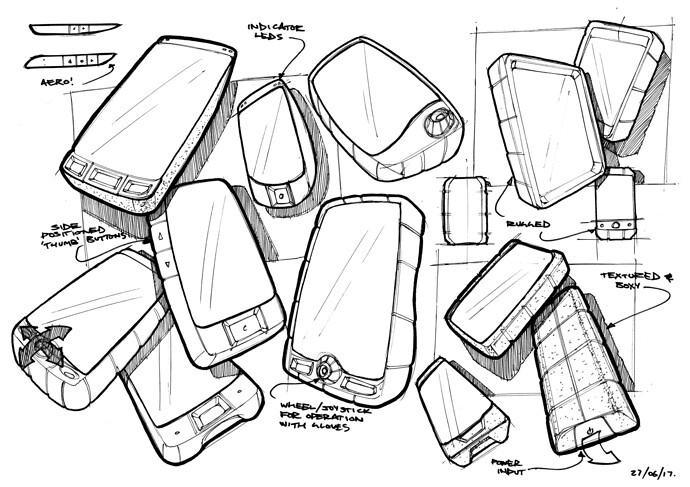 Great idea, I may join for 30 minutes a day in the Doodles thread.

For ink sketches, I always find they are much better if I start drawing the rough perspective lines and composition with a 9H pencil.
You can then do the expressive ‘draw through’ strokes of the sketch by just following the pencil.
For the rest this is mostly a matter of refining your line work by doing. It also helps with sharpness if you consciously break down the details into sketch elements as you would in Solidworks while sketching (“spline-fillet-arc-spline-fillet-line-fillet-line”) instead of drawing it as one shape.
The more your mind is with the shapes the better they will come out on paper.

To be honest, besides them needing to be a bit more precise and expressive, I think these are pretty good sketches.
Definitely much more than just getting by from the studio work I see on average.
The typical time spent on such a sketch sheet is 1 hour for a designer, including some basic color indications.
So you can get faster too, keep in mind what you want to communicate and what is essential to the sheet.

Thanks for your feedback Ralph, 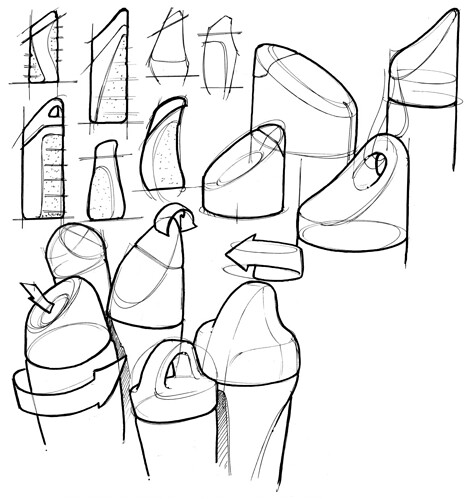 good stuff! You will see the progress in just a couple of weeks. With my sketch a day I’ve noticed a dramatic difference from the first couple of weeks till now, 6 months in!

Today’s efforts attached; dumbphones! Some good, some bad. I feel like you can see where I found my flow as I worked from left to right.

I did attack this one with markers after scanning this, but the results were less than favourable as I’m a little rusty, so I won’t post it! Maybe tomorrow instead of sketching I’ll get these into Photoshop or Sketchbook Pro.

All thoughts and comments appreciated. 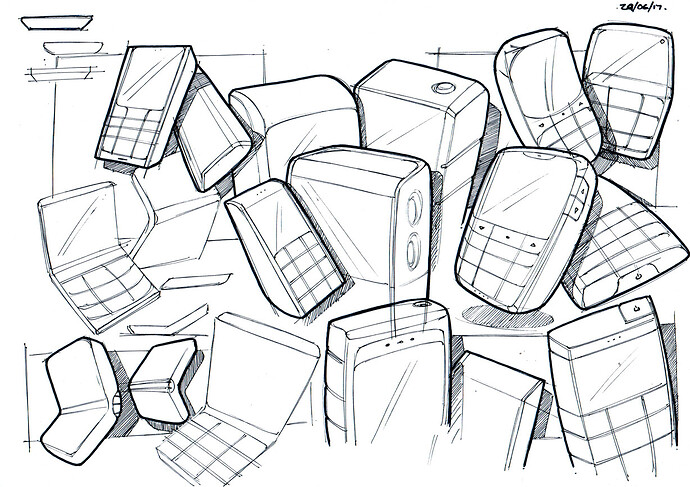 You may have noticed I’ve been absent for a while. In short, I was interviewing (successfully) for a new job which starts mid-September so I’d been spending all of my time preparing for that almost immediately after I started this thread!

Anyway, here are today’s sketches in the weekly sketch challenge theme of printers! 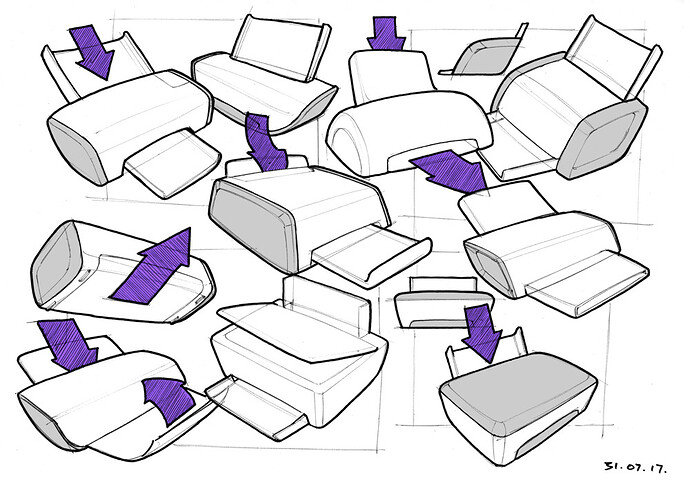 congrats! Where will you be working?

Thanks MD, it’s a consultancy in Bristol, UK. I won’t name names until I’m away from my current employer!

understood. Best of luck with it, and keep those posts up!

Tried a new approach and am not overly happy with the outcome, but want to show everything for the sake of progress tracking.

I wanted to attempt a more well rounded analogue/digital sketch, but I think I pushed how much I was trying to do in the hour I had this morning and ran out of time. Should have kept it more simple and just done enough to illustrate material breaks, value, texture, etc. I may come back to this, may move on to the next.

The original looked a bit flat so I bumped the contrast and whilst it definitely looks like a bodge-job, it looks much better. 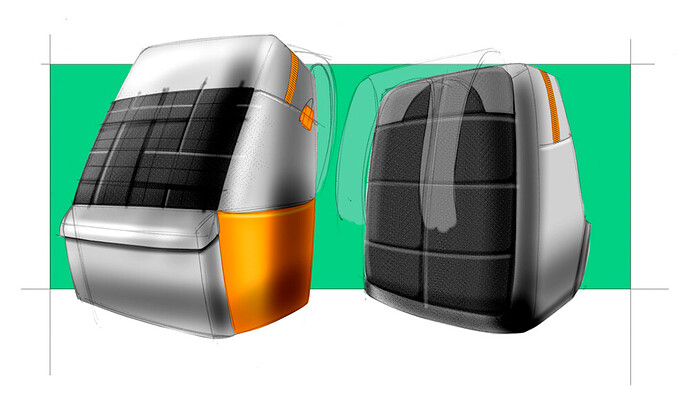 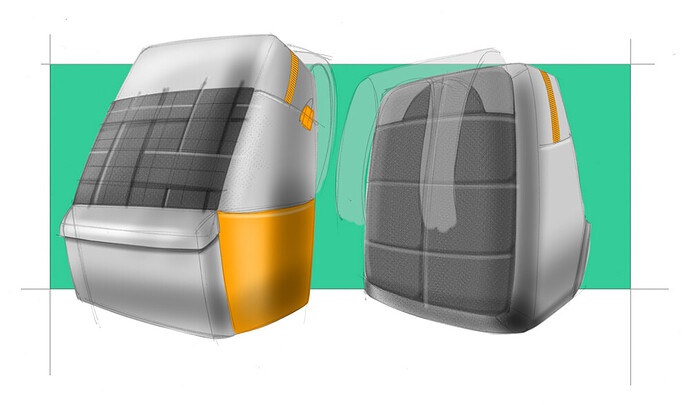 Congrats on the job!

The contrast bump on the second image makes a huge difference. I think it would benefit from heavier linework around the outside of the bag to pop it off of the page.

At which university did you study?

At which university did you study?

Derby, why do you ask?

Just curious how other unis teach. I went to two and lectured at 2 others. They have taught you well.

Thanks MK19, where did you lecture? I feel like they gave me a good foundation but that at least 80% of the real learning has been on the job, though I suppose that’s the case with every subject/career.

I’ve always been interested in the prospect of lecturing but have wanted to get some industry mileage in first before thinking about it seriously.

Quite scrappy and felt like a bit of an ‘off’ day. These are biro and papermate flair, scanned in and with some background/shading applied in Sketchbook Pro to add a little ‘pop’.

Applying a one-hour time limit has the benefit of pushing me to produce several forms quickly, but the caveat of feeling like I’m rushing and that I could do better given more time. I want to upload everything up here unfiltered though so that a real reflection of where I’m at can be seen, even if I’m not happy with it!

Missed yesterday’s upload because I cycled to work and as such had no spare time! 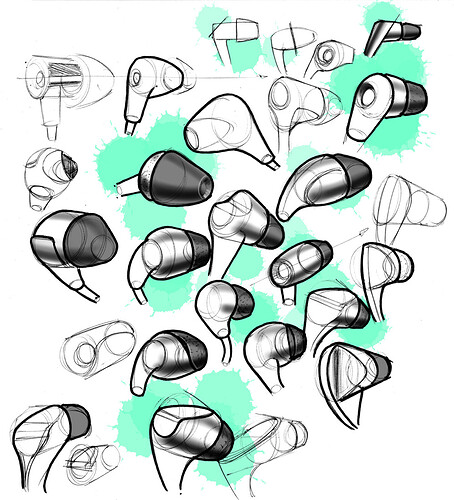 These are great. Strongest so far I think.

Thanks guys, I’m interested to hear why. Quality of exploration, sketch style, etc?