Please see photos of my final year project. It is called the Omniboard, and is an on/off-road skateboard which mimics the feeling and motions of snowboarding. The central castors are constantly in contact with the ground and the outer wheels are used as stabilising wheels.

The board allows the rider to move down the hil carving from heal to toe edges and with practice bring the board round perpendicular to the slope allowing speed to be scrubed off or stop the board.

I really like some feedback on the design/ appearance/ concept

so feel fee to leave some thoughts. 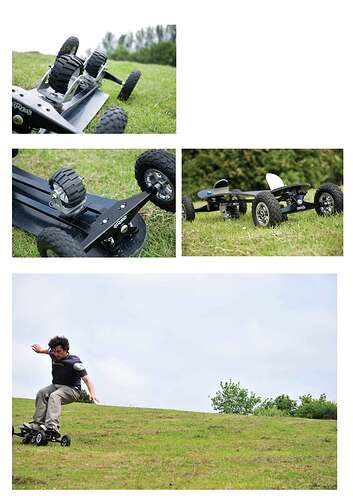 looks nice rich how did the test ride go?

Check out www.Freebord.com if you haven’t already because your product is very similar to theirs and they have done extensive testing and prototyping on their boards which is somewhat explained on their site. They talk about the width of the tracks being an important factor and so forth.

Your board prototype looks good, how does it ride?

I have owned a freeboard for almost a year now, and i love riding it. However it’s biggest draw back is that you need deserted butter smooth tarmac slopes to really get the most out of it. In the UK such places are virtually non existant. This lead me to adapting the concept for offroad use, and inturn down a more mountian board route.

Thanks for your comments though. I take it freeboards have reached Australia then?

Being a skateboarder myself, I’d love to try that kind of board : experience the speed, different terrains and tricks that could be made.

But speaking of tricks here is my drawback to the concept : If I had one of these I would want a put a rail in a middle of a slope to grind it. But the way the board is made, it is limited to boardslides variations (no 50-50, 5-0 or whatsoever).

I know that the concept heads probably more towards free riding but if this would become popular, people would want to be able to do these things. (especially with a fixation system).

I guess you already know about this one two :

Have you tried it while doing your project? If so, how does it compare to your board?

You are right about the freebords requiring buttery smooth surfaces, those wheels they use are slick and small, they do terribly in rough terrain. Plus “down-hill” off-road riding would open up more opportunities as you said. I keep thinking about the skateboard in back to the future 2

Freebords haven’t reached Australia (as far as I know), I just stumbled upon it whilst surfing the web so I haven’t actually ridden one. I do aggressive inline skating personally as well as plenty of snowboarding. How do the freebords (or your model) do in landing spins like 180’s?

During the first test session, I had my doubts about certain components, not being up to jumps, and so asked the guys testing it to try and rein-in their inner Evil Knievil until I have ‘beefed’ up those sections.

I think there are a lot of products out there trying to do the same thing,

I have a lush Samba Longboard, Ridiculously fast, you can carve it like a snowboard and pull off awsome slides,

I think everyone should have one, great for comuting to work!

Only draw back is you need lots of tarmack not grass… 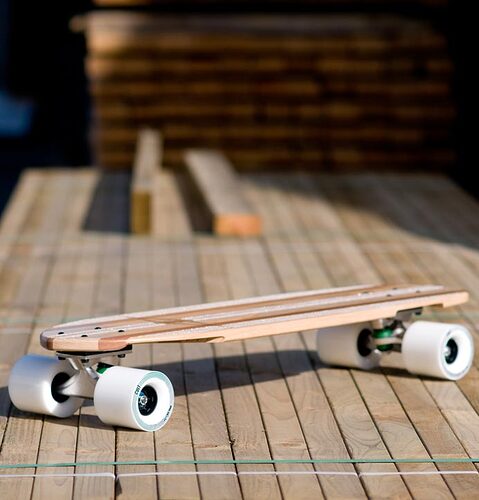 Longboard decks and custom completes from Lush. We build all our boards in the UK to order. Free UK Delivery on all decks and completes!

Hi, I hope I’m not violating protocol posing here, since I see there hasn’t been any real activity in this tread for a while. I was really struck by photos, and the ability to turn the board sideways to brake. I hope development is still moving, the concept seems pretty strong.
Anyway, if you are still around, or if someone else can clarify: I was wondering why the casters are placed between the two sets of carving wheels. It seems that if the casters were placed toward the ends of the board, you could use larger wheels. I would think you cold also omit the metal frame between the trucks, and maybe get more used out of the deck material.
I have only been on a snowboard once and, though I did buy a skateboard long ago, it mostly got used for moving furniture, so I am pretty ignorant of skate-and-snow-boarding dynamics.

There have been a bunch of skateboard-like things around with front and rear deck sections connected to pivot in the long axis of the board, with a caster centered in each deck. They seem to go by various names (FreeRider, RollerSurf); I have no idea which is the original, but presumably the patent has run out. I’m not sure if that intersects with your design, but perhaps it would add some motive capability and add a few turning modes.

I have owned a freeboard for almost a year now, and i love riding it. However it’s biggest draw back is that you need deserted butter smooth tarmac slopes to really get the most out of it. In the UK such places are virtually non existant. This lead me to adapting the concept for offroad use, and inturn down a more mountian board route.

Thanks for your comments though. I take it freeboards have reached Australia then?

They make boards for kite boarding that go off-road and have small tires. There are a few different brands. You should try your board out using a kite!!

Land/Mountain boards are great to ride when the wind isnâ€™t high enough to kite on the water or if you donâ€™t live near a lake or ocean for water kiting. All-terrain wheels mean these boards work well on concrete, grass or sand and can also be fun...

I saw your post linking back here from Silverfish Longboarding.

Just htought I’d check in on your progress.

My biggest question about this board is - does it slide side ways?

The Freebord slides sideways by rolling on the center casters and sliding the back side wheels.

Urethane on asphalt or concrete will slide. I find it hard to imagine that pnuematic tires would slide sideways on any surface.

What is the effect of the casters on your board? I can’t see how they would have any effect at all.