OMFG! Does the world really need a 916 mL cup of coffee?

I have to say that I find this little piece of marketing seems to be the last straw for my camel carrying what’s left of my faith that there is any kind of shift away from excess consumption. 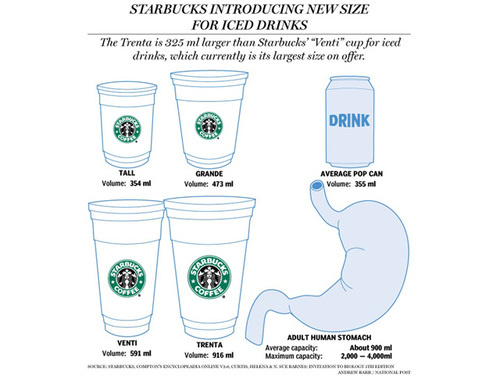 The New Starbucks Trenta Cup Is Bigger Than Your Stomach

To satisfy the unquenchable gullets of America's brand-name coffee drinkers, Starbucks will introduce a 916ml Trenta cup. That's more than the average capacity of the human stomach, and enough caffeine to stand in for a defibrillator.

Haha… it’s Starbucks they are the epitome of what is not needed.
They meet the demands of there customers

I happen to work for a cup manufacturer to the large guys, we also make those hated foam clamshell carryout containers, the black bottom clear lid deli trays in your supermarket and the forks’ spoons. We are working on new materials too, but that’s all I can say about that. The environment is important to us also.

I can tell you, everybody wants a bigger cup. The bigger the better. More print area, brighter colors and stronger sealing lids. We actually had to limit our sizes because we did not have a machine that could run them over 62oz in Polypro. We are getting bigger machines to make bigger cups, of all materials.
And of course, all the cups have to fit in a vehicles cup holder, use a lid already made or one that will work across the entire new line.

IT is crazy how many large cups we propose every year.

Wow. That’s incredible. I thought Super Size Me helped make the cups smaller, but I guess I was wrong.

I’m actually stoked… I can’t get a big enough container for my unsweetened tea.

hmmmm… maybe it’s not how much that’s the problem but the drink in the first place.

I’m actually stoked… I can’t get a big enough container for my unsweetened tea.

hmmmm… maybe it’s not how much that’s the problem but the drink in the first place.

That is quite ridiculous, but I hope we let market forces do their job and it will (hopefully) be discontinued sometime soon. =)

That is quite ridiculous, but I hope we let market forces do their job and it will (hopefully) be discontinued sometime soon. =)

Ha! That’s funny… Not in this country.

I wonder if any truck drivers frequent starbucks with those 2 gallon mug things. It is America after all. =)

I was going to say - doesn’t 80% of that volume get filled with ice though? It would be interesting to do a survey of how much liquid actually gets dispensed into a biggie size cup.

Haha… it’s Starbucks they are the epitome of what is not needed.
They meet the demands of there customers

That doesn’t explain this 916ml monster. You think a bunch of customer walked up to the clerks or managers “Hey, I want a 916ml cup!”? “I NEED a 916ml cup, PULEAAAZE!” I doubt it. But now lots of customers are gonna try it simply because its new and - of course - the biggest thing in town! Anyhow, I sure dont want to trade with those customers because all that caffeine will give them an equal big crash later. Not to mention the general harm to the body. Like my dad always says: “every person digs their own grave”.

«Music melts all the separate parts of our bodies together.» — Anaïs Nin
My Faulkner profile: http://www.fcl.org/index.php/member/7347/

If I drank that I would be shaking and sweating profusely. 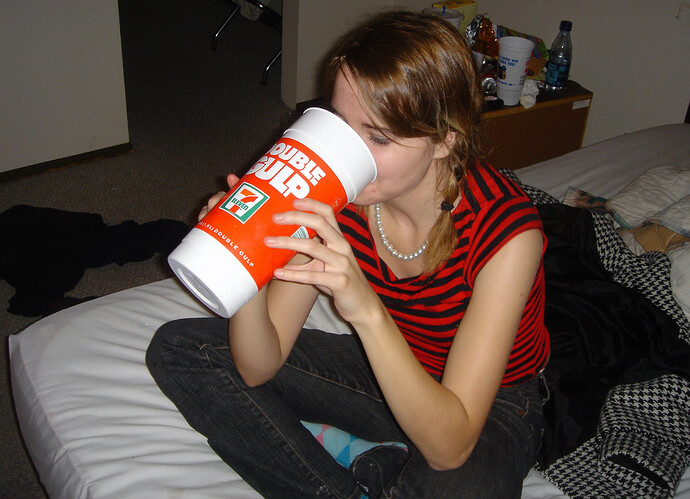 I’m more amused at the “outrage” at the scenario where someone wants to provide more options to their customer.
Its so silly.
Who cares, really?
Is the cup too big for you? GET A SMALLER ONE!

two segments of the(coffee) market, glupers and gourmets. Lots of money in both but as we all know nobody ever went broke underestimating the (taste) of the average consumer. That said, I am going to target the latter with my products, its just more fun.