The night after Christmas my old yellow cat Ben was mauled by a dog owned by a family visiting the neighbors down the street. I had seen the animal running loose on the street earlier in the afternoon but didn’t think that much about it. It was a hyper little “Min Pin” and I didn’t think it seemed to be a real threat. Ben is sixteen and his “turf” is pretty much limited to his favorite chair on the front porch, which is a good eight feet above street level. He’s still very agile and a six foot fence doesn’t present much of an object to scale.

Later in the evening our dinner was disrupted by a thrashing and crashing on the front porch. Running to the front of the house I found that the min-pin had Ben down on the floor and was biting at him furiously. As soon as I opened the door it took off, but the damage was done. Blood was everywhere. I rushed him to the local 24/7 Pet ER (it was a Sunday night) and after two hours of waiting, blood work, x-rays, a 1000cc subcutaneous fluid transfusion, they told me they were going to keep him until morning when I should then take him to his regular vet. $718.

Ben spent the day with the vet. More dextrose/saline infusion, antibiotics, and a trans-dermal pain-patch. $208. The next day he didn’t seem to be improving much and had developed a respiratory gurgle … back to the vet, and another round of antibiotics, plus more fluids, and a 1000cc bag to take home; I was taught how to administer subcutaneous fluids. $158.

Two days passed and no noticeable improvement so back we went. The vet was concerned that his thyroid had kicked his metabolism into over-drive and that Ben’s kidneys might be crashing … more blood tests. All was well in that department. $224.

Three weeks after the attack he is finally on the mend, albeit not very confident of his surrounding anymore, and his left eye suffered nerve damage.

The morning after the attack I confronted the homeowner whose guests’ dog was running loose and mentioned our communities’ leash-law requiring all dogs to be walked on leads. He denied that it was his friend’s little dog, Tootsie, ,“because she wouldn’t harm a butterfly.” I told him that I had personally witnessed the attack and wanted to address his friend about paying for the damages his “little dog” had inflicted. He refused to introduce me, and they left later that morning.

Needless to say I get the stink-eye from the neighbor down the street when I drive by. Not that I care about him, they only moved in about six months ago and haven’t proven to be too friendly when spoken to on my evening walk. It probably wouldn’t do much to improve the relationship if I told him that if I ever see his friend’s dog on the street again I will, without further provocation, open up on it with my 12 gauge. 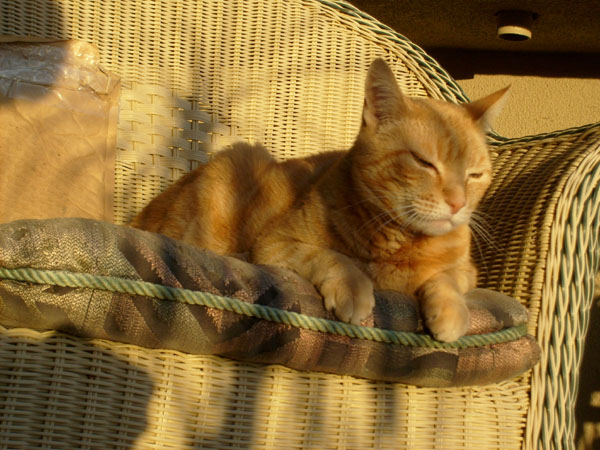 That really stinks… Sorry to hear about it.

Don’t know what i would do in your situation, but that neighbour seems to be a grade-A douché. Why wouldn’t he let you talk to the owner unless there was something to hide?

Sorry to hear about your kitty nearly getting killed, he looks like a sweet old man.

The cat I grew up with got torn apart by a dog, got his jaw torn off and bones broken. I’m glad I wasn’t there to see it.

It probably wouldn’t do much to improve the relationship if I told him that if I ever see his friend’s dog on the street again I will, without further provocation, open up on it with my 12 gauge.

Now we’re talking. I have no respect for pet owners who don’t accept responsibility for their pet’s actions.

Glad Ben made it after all that.

Sorry to hear the story. They of course are responsible for the bills. It is a liability of owning a dog.

I just googled “vet bills dog attacks cat small claims court” and there are lots of results that might give a guideline on how to proceed at getting them to pay up.