Has anyone seen this yet??? what do we think??

we think the 90’s are over. It might sell a couple more than this… 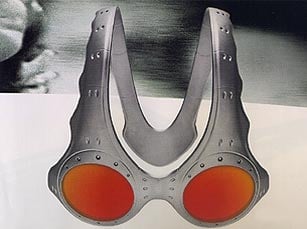 … but that shouldn’t be hard to do.

You would think that after all these years they would realize that people don’t want to live inside a science fiction film… and if they did it would be Minority Report and not Alien.

My first impression is that it looks like something you’d pick up for an 8 year old at Toys R Us. …Kinda has that overdone Super-Soaker aesthetic.

I thought that was just a concept for Oakley’s website…I didn’t realize they actually tried to sell those.

The Thump is kind of interesting though, but once again, more as a concept than a product. I would like to know who the intended user group was for the Thump and also, what about the social issues of CONSTANTLY wearing your headphones, but not being able to visually tell people around you if you are listening to them or your music.

Conclusion:
That thing is not a very good design and probably won’t sell. It would have been better as a “concept Product”. ypu never know though, maybe Vin Diesel will by a whole container full.

Sometimes combining disperate functions is not a good idea. I think there is room in the market for a well designed Oakley MP3 player (see over priced under functioned, but good looking Bang&Olefson MP3 player) this just aint it.