It’s not my preference but with the need to attract dollars, I think they picked the Nissan minivan so all the soccer mom tourists will feel more at home in the city.
Am I too cynical…?

Ever get in and out of a minivan? It’s pretty handy actually. And you can pack more than 4 adults comfortably.

Handicap-friendly. However, it is definitely fugly. With the number of people, a van makes sense.

I think it shows a general lack of creative thinking in government. Sure, a huge box gives more space for passengers, allows handicap access, etc. However, do all taxis need to be ready to take a wheelchair-bound person, two of their friends and 6 loaded Samsonite bags every trip? Sounds wasteful to me.

Actually I think a mini van is the perfect solution. Sliding doors are much safer for bicyclist, it’s not all about handicap access. Getting in and out is easier for everyone. Fuel Economy can be very good too. The ability to have 6 loaded bags is nice too, or 4 people…
Is it a lack of creative thinking by government? These were submitted by car companies competing. 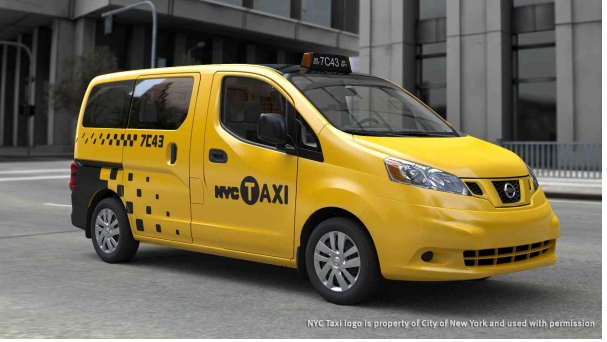 It’s actually the NV200, a car in nissans japan portfolio. Not a lack, but an absence of any design

From a design standpoint, most of the vehicles were retrofitted concepts except the one that was the Turkish design, and that one was very ambitious - I think the reality of getting that engineered and mass produced wasn’t as compelling as the design might have been.

I’m more wondering what drove them to Nissan rather than the Ford Transit Connect. Seems like keeping some of that money in a US based company, and the “incumbent” if you will would have been a better business and political move.

At the end of the day it’s still just a yellow box driven buy a guy mumbling into a bluetooth and with a faint aroma of vomit in the back seat.

perhaps someday a minivan will be as distict as the old Checker Cab was, I doubt it though…

mrt: I hear you. I’m saying maybe have a ratio of 4:1 with small diesel or electric sedans making up the majority, and the rest being the more versatile minivans. NYC has lines of taxis everywhere, so I can’t believe that wouldn’t be enough. Plus it would reduce the pollution and fuel consumption by 20-30% over a fleet of large minivans.

I always thought this was the best taxi: