Not sure what to think. How about you?

I am not sure how to feel about this “inspired” interpretation. It is so blatant but at least they recognized a classic design language…of course they did nothing to advance it. One thing is for sure, I bet that the design background meeting was pretty quick and concise. 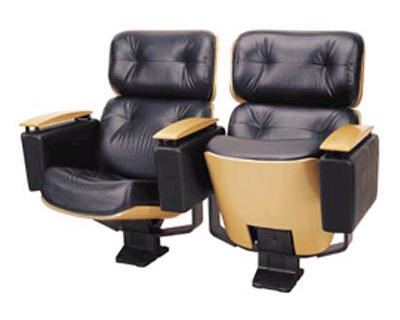 In an Eames-themed theater, I think they’d be great! Sadly, I doubt that’s what’s in store. (Personally, I’d have gone for the walnut finish.)

I’m not offended, because it’s such an iconic design that people couldn’t possibly be fooled.

The arms really do kill it…and the walnut would have been better.

I went to a crazy high-end theater (iPic) over Christmas break. The seats were super-wide with foot-wide console arm-rests. In the hotel-like lobby they sold wine by the glass. Impressionist and modern art hung on the wall. A little over the top, but worth the premium.

IPIC Theaters' passion for the movies is bringing a premium yet affordable movie experience for everyone.

Don’t you have a theater like that in Portland?