Been looking lately at the new Lumia series from Nokia and at their videos on youtube. Somehow I can’t imagine these series as being a wide audience phone, but rather as business class phones in direct competition to Blackberry.

Tho I have a feeling that in a couple of years Windows Phone OS will continue to be a really unpopular OS.

Not business facing at all. Those color palettes are clearly targeted at the consumer market. Have you used a WP7 phone? I have one. It’s extremely well integrated socially. It’s a social phone. (Of course, Office integration is very tight, too.)

I think it’ll pick up, but not overcome iPhones. The WP7 phones that have been released have been uninspiring, ugly, and cheap feeling. The Lumia phones are quality pieces of design with large mainstream appeal.

I’m digging them a lot. I want one. My Samsung Focus is a cheap feeling piece of hardware.

I love the new Nokia phones as well as Windows Phone’s look. How well does that mesh with an OSX ecosystem though? I’d imagine sales would increase 20% if they explained and marketed compatibility well. Otherwise it will be another Zune–pretty hardware, experience overly closed.

There’s a Windows Phone Connector app in the Mac App Store. It sync the necessary things, but doesn’t have as much power as the Zune program in Windows. Their new marketing is much better than their old ones. You should check out the giant Windows Phone in Herald Sq, NY. Big Windows Phone in NYC | The Verge

Indeed there is a better marketing, and indeed, it is a social phone, that’s what attracted blackberry fans in the first place.
Tho what really makes me think it will still be unpopular is the lack of icons. I don’t know what you guys think, but icons were…iconic for the Windows OS. Right now sadly, the lack of them might confuse people, and its lack of openness might continue to make it unpopular. People do notice when they don’t have enough games and their friend doesn’t know which one to choose.

Sadly I did not meet people with a W7 phone - only older, non-W7 versions sadly.

I went to a Nokia Store recently and was pleasently surprised by the design. Nokia has exceeded its reputation with this one.
Regarding WP7, I would say that I would have switched had my life not been so entangled with google services, which makes me go along with my android. The UI design is fresh and original, does’nt feel microsoft’y at all. I found the screen to be pretty small after seeing huge screens on android devices like Galaxy Note and S2. Let there be better hardware and better prices, and I think it should take off. 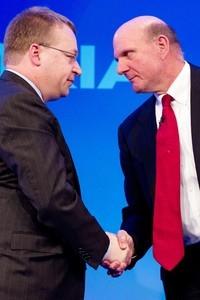 The question investors, technologists and strategists have long been asking is, 'What is Steve Ballmer willing to pay to beat Apple and Google?' Now we have a small part of the answer, $230 per cell phone.