No more Tangled Headphones - what do you guys think?

Are you bothered by tangled headphones?

My name is Aj, Im a 10+ year fashion designer, However recently i’ve been dabbling in design outside of the fashion realm. So I created this design for all moblile devices ( my prototype is for the iPhone, but the concept works for most brands ). My main focus was to eliminate the constant aggravation with tangled headphones, as well as lost or damaged headphones for my mobile device. I feel like i’m headed in the right direction with this, i’m just curious to know what some outside opinions on this would be. I’ve put a lot of work into this, even went as far as to acquire patent pending status on this. But its always good to step outside my social box and get some good outside opinions. Im glad I stumbled across this site. I look forward to reading more about other tech news and designers out here. 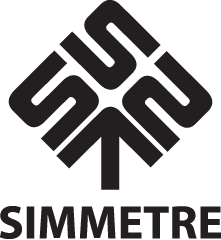 It’s nice but what if someone needs to replace the headphones in the case ??? If I am not wrong I don’t think it will be easy for everyone to do that.

For me it adds far, far too much bulk to the phone. A typical rugged case might add maybe 5mm thickness, but this looks a lot thicker. You’ve also added some potential failure points inside the case, however I do recognize that those retractable cord mechanisms are generally pretty bulletproof.

Anyway you might have me sold if you cut down the thickness dramatically. A super slim retractable cord mechanism would be tres cool.

It’s not a bad idea…given all of the other i-gadgets out there I could see someone buying this.

The biggest challenge is actually managing the retractor & headphones over time. The strain relief on the headphone jack is going to be under a very high stress which will make it prone to failure. It’s also difficult to control the force and stoppage on the headphones so you may find that after a few weeks/months the headphones will wear out due to stress on the wire… Those things can be overcome, but it’s the #1 failure point for cables like that especially headset jacks.

Thanks for taking time to review my post, your comments are greatly appreciated! In response to your comments I would like to say that I have indeed made improvements on this design. I do agree that the slimmer the better, and after speaking with our overseas production, they informed me that it is indeed possible to make the reel slimmer, it will just require using better quality materials, as oppose to the cheaper ones they used to make my prototype. If you reference the photos below you can see a comparison from a standard case without headphones and my design that includes retractable headphones. After day to day usage of “the Comrade” I can honestly say that the trade off of adding a few mm of thickness to my case so that I don’t have to deal with tangle headphones is well worth it. I also would like to note that the headphones/reel would be totally interchangeable. I was thinking this could possibly be a good selling point for customers who would like to be creative and alternate color schemes. ( just my opinion ) 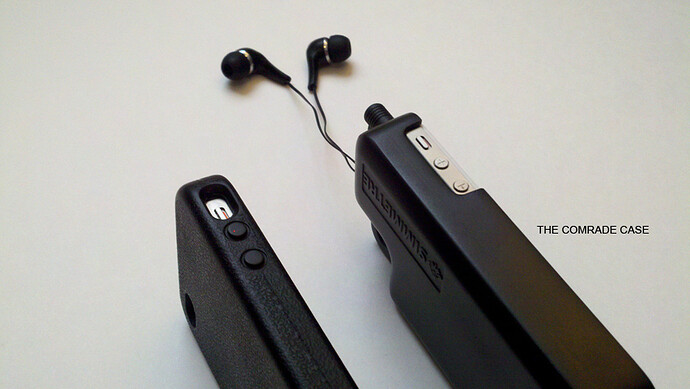 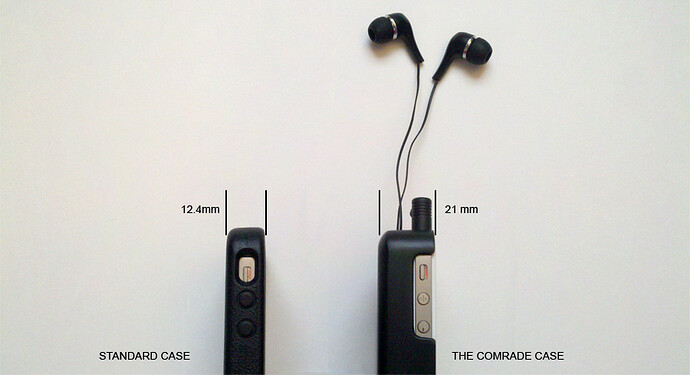 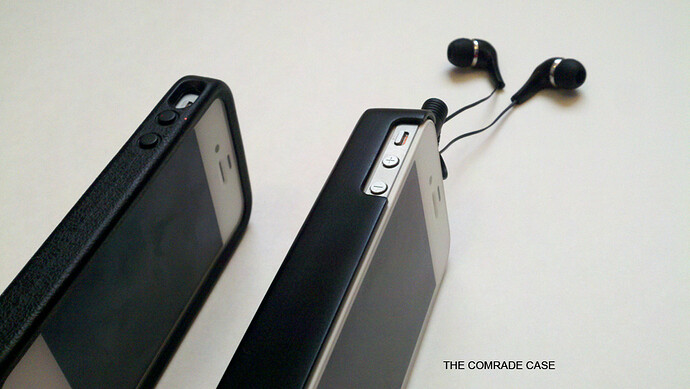 All that extra bulk for untangled headphones? You might be unto something but in it’s current state I don’t think you are there yet. The most obvious argument would be… why not just go bluetooth/wireless?

Hey “Sketchroll”, thanks for reviewing my post. I actually get that comment from a lot of bluetooth users. It would be logical to just do away with wires completely. My issue along with many others that I have come in contact with is the growing health concerns of bluetooth and wireless tech. Just last year they announced new info on the health risk of bluetooth. I think wireless tech is great. but the health concerns can leave some people skeptical enough to just stick with wires.

Hello NURB, Thanks for taking time to respond to my post. I guess its safe to say I will not need to send you a Comrade for Christmas haha. Well if I get the size down to lets say 17 mm or maybe even 16mm would you reconsider? haha

It’s an interesting idea, and I have seen a couple solutions to it (one of which being a case). However, like NURB said, the thickness is a huge drawback. You are almost doubling the thickness of the phone. One of the selling points of the iPhone is it’s slimness, with your case it is pretty much lost.

I like the idea of keeping the headphones with the phone, but I think there are better locations.

Sometimes, designers fall in love with their own ideas and often get tunnel vision. It’s a dangerous place to be. I think the idea of “untangled” headphones is an interesting idea, but you may want to broaden your scope on the different ways of achieving this. Your argument for wireless health concerns, imo isn’t a very strong one… In fact if you think about it… the smartphone itself is a wireless device… The phone itself probably has bigger health impacts than a tiny bluetooth headset.

For example, this is a ‘wireless’ headphone idea I’ve seen in the past. Poorly executed, but interesting imo. It solves the problem was tangled wires and the common misplacement of bluetooth headsets.

Tangled earphone cords may suck but I don’t think something that makes the phone 2x thicker is a good solution. Easier to just wind your cord around the phone if you are so inclined. I don’t even like how a normal case makes the phone thicker. One this thick and might as well be carrying the little box that the earphones come in if you buy them separately.

My sister has this. Can’t wear any earplugs.

One thing though… Most men need/want their phones to be slim, since we put it in our pockets. However, for women it usually doesn’t matter as they just throw their phones into their bags. If you observe women, you’ll notice that the ones with the giant, rugged, embezzled, or cutesy cases are usually women instead of men.

My sister has this. Can’t wear any earplugs.

Negative. Big ear syndrome. I have a lot in common with David Pogue of the New York Times, evidently.

Do you suffer from Earbud Cartilage Deficiency Syndrome? Don’t worry. A range of earphone accessories can help you keep those earbuds in place.

In regards to bluetooth being a health risk, there are legitimate concerns considering the fact that bluetooth is like a little microwave resting next to a persons head. But be that as it may people are still going to uses what they prefer anyway. The beauty about the mobile devise market is that there are over 2 billion potential customers globally. I think if I get this particular design down to around 17 mm which is basically the same thickness as some of the " durable cases " available now , it could be some potential there. I do agree that its not always good to get " married " to an idea, but hey some marriages turn out great. haha

once again i want to thank you guys for taking time to review my post!

a quick search on kickstarter will show you some other similar ideas to your product:

that was just a quick search within KS, did not even google it… a good and thorough research upfront might help you next time…

thanks for posting. I’ve actually seen these. The good thing is that I filed for my patents back in 2010 and im also pending in other major countries dating back to 2010. So I feel pretty confident in that area. Its like I said earlier, this market is so huge. Honestly if you only get a small percent to take interest in your product it can really be a positive thing. Man it would have been great if i had a 3d printer back then!

The reason I wouldn’t need one is because I only use my earbuds if I’m on the subway or shopping, which is two days a week. I wrap them around my hand then place them in my pocket or bag and somehow they rarely tangle.

If you filed for a patent in 2010, and haven’t gotten a product like this to market yet that’s a dangerous sign. 3 years of development when people are already posting the same stuff on kick starter is a bad position to be in.

And even considering patent litigation when you haven’t made any money from selling products isn’t a good place to be. It’s clear there is competition out there and in this kind of a market you need to be able to get a product turned out in 6 months or less. Especially given that Apple doesn’t stick with an iPhone form factor for more than ~2 years. The 5 S will be out this fall which means you’re already half way through that cycle.