NO discussion on the HP touch?

but now I ask, will this product try to enter into the same arena as the Cintiq? True, the HP uses fingers instead of a stylus but now I wonder if there will be any third party folks stepping up to bring this into the game. The single biggest downfall of the item is that its trying to be an “All In One” machine meaning that it has a super limited shelf life where as the Cintiq is just a peripheral that is added to whatever box you happen to have. I have to wonder if there is a way to by pass what ever shitty component are inside and just opt to use the screen, then again for the price you might as well get a Cintiq. Possibly worthy or piece of JUNK?

We have a demo in the office. my first impression was that the display was gorgeous in terms of color, sharpness, contrast. The actual touching and sliding business was pretty slow and laggy. I didn;t bother to look at the specs though. After about 3min of web surfing, my arm also got very tired holding it out at shoulder height and i reverted to KB and mouse. It doesn;t pivot down flat either like a Cintiq.

The Cintiq is a tablet system for industry and professionals.

The HP Touch is a touch screen computer designed for lightweight PC users.

Not in the same arena, ballpark, or even country as the other one.

I saw one of these in Staples. It’s a nice looking design. I own a few HP products, they seem to be one of the companies that gets design, although they interpret it in a very conservative way.

The touch smart is not anywhere near a Cintiq. Completely different use. The touchsmart is for drag & clicking, not for hundreds of various pressure levels. I have to say, it seems to be the closest thing to Star Trek yet. Whether that is worth the effort is another question…

I, too, am an HP fan. If I’m in the PC market, I’m getting an HP for a variety of reasons. I was intrigued by the concept, but as mentioned there is some lag in the touch. You can even see it on the commercials if you watch closely. It’d be great for the intended audience, teenage girls, etc.

nice demo, might work well in showing pictures, finding music at a party. but not for the general day to day use.

You might expect wacom to come out with a consumer device with touch in integrated now they have their RRF technology:

this would allow either pen or finger to be used.

after a few seconds my thought was, my arm would get tired doing that…look down and see the mouse is still in the shot (so either they don’t see it as a viable primary interaction mode, or missed their pitch. My next thought was, does it flip down for horizontal interaction? sound like no.

This made me think about all the pre-brick hype about the potential for a touch laptop, and while I see it as potentially more viable than a desktop/upright monitor, the comfort of horizontal interaction with these technologies would seem to dictate a tablet form factor would be best to fit the bill.

This is much cooler… 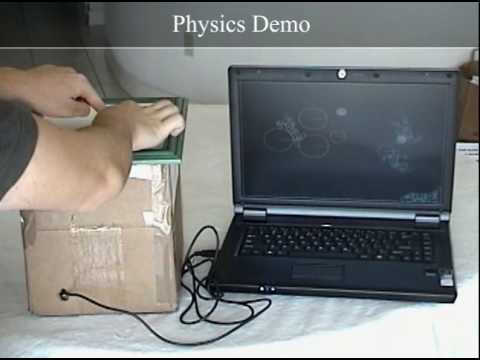 The best part is they just offered a free driver upgrade that gives it Multi-Touch capabilities, which is cool because Adobe CS4 is supposed to include multitouch features.

You should go and talk to the guys at Frog who did the UI for the TouchSmart.

As for the video- unfortunate use of “do you want to touch me” written by convicted UK glam-rock pedophile Gary Giitter.

As a terminal - yes.
As a mobile device for working in the field - yes.
As a personal desktop - no. Give me one situation where a mouse with a scrollwheel won’t do the trick just as well, or better? The software looks nice, but it would function the same with a mouse, in a more ergonomic and just as intuitive way. Completely pointless application of technology imo.