What is going on in car design? 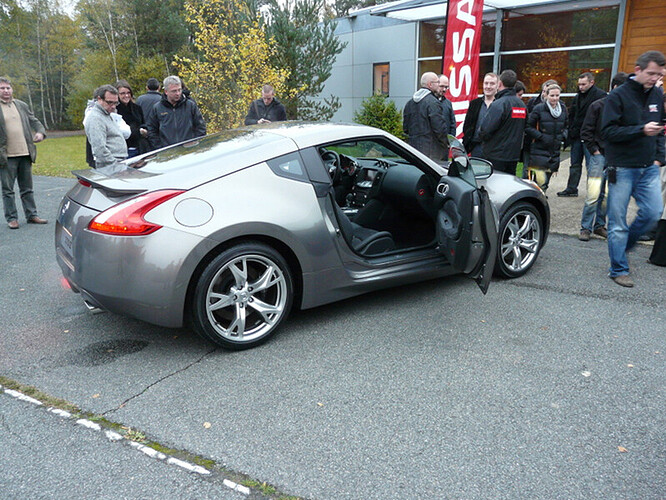 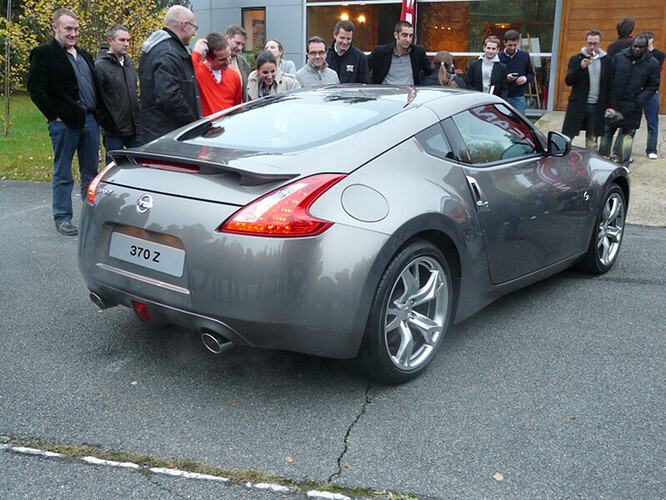 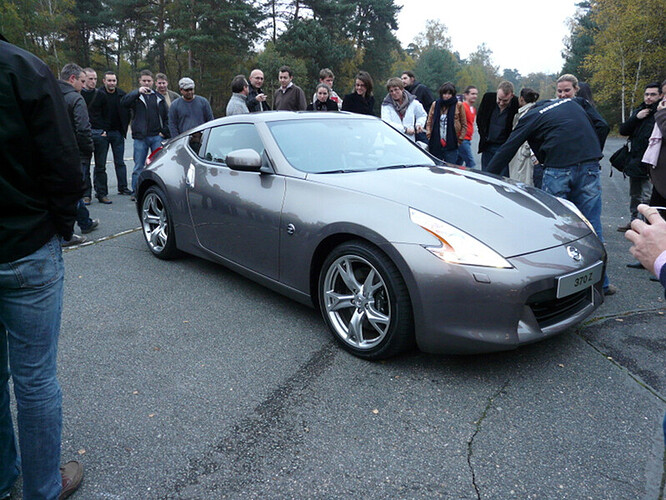 Well…initially I was not a fan of the new headlight shape. I was still looking at it as the shape of the 350Z headlights, but with an awkward intrusion. Often I will find myself admiring the shapes of body panels, as defined by the cutlines. I think they’re best when simple, display an economy of form, and are harmonius with the dominant elements of the exterior. The new headlight shape really flies in the face of my personal preferences.

HOWEVER: the side view shows it from a better angle, and it seems much more attractive as it stretches far back along the top of te fender. I’d almost like to see them keep going with the idea and make it sleeker, like an upside-down Nike swoosh.

Overall, I think this is an improvement over the boxy styling of the 350Z, but still too similar to that car to seem very fresh. I’ll reserve my final judgement until I see it in person. (I had previously railed against the new Maxima, calling it boring, etc. I have since been able to see them in person and I find that I was very wrong about them. I really like the muscular proportions and imposing face.)

I’d for sure have to see it in real life to make a final judgement, but from the pics, i kinda like. There are some interesting thing there, like how the negative space in the front maps connect to the panel line. same in the rear which also looks like the wheel arch line that intersects with the rear lamp matches the line on the trunk.

It’s obviously some sort of new Nissan styling cue as was first shown on the new maxima. In the pics I have to say the wacky maxima lights looks strange (like a fish with a hook caught in it’s mouth), but in real life it’s actually very nice i think.

while i do understand the market for these though, I can’t help but like the old 240Z in terms of styling much better. They were like a japanese version of classic ferrari proportion, almost. there’s a mint one around the corner from me and every time I pass it i have to stare. 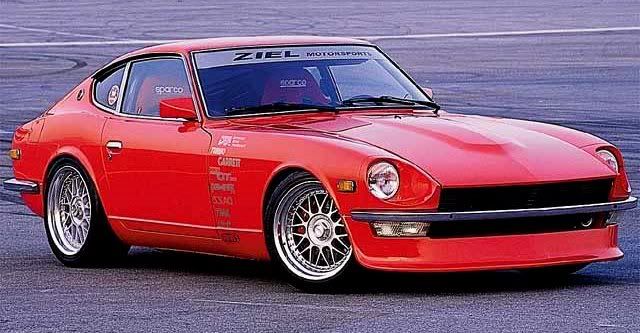 I think the 370 is a step up in terms of styling. The 350 was far too derivative of the Audi TT, imho. The 370 is going somewhere else, while conserving the TT proportions.

Also, I have to say, these headlights work better than on the Maxima. The Maxima looks better in real life than in photos, but there is just something vaguely wrong with the proportions. It hurts even more since the last Maxima was amongst the best looking sedans out there (ever?).

Richard: I love that long hood look too. It’s too bad that no one is really doing it. BMW brought it back on the Z3, but killed it immediately.

Hated it at first, now it’s starting to grow on me. From the side it’s looks pretty sophisticated in my opinion. Back end still bothers me a bit, I wish they scaled down the size of the tail lights 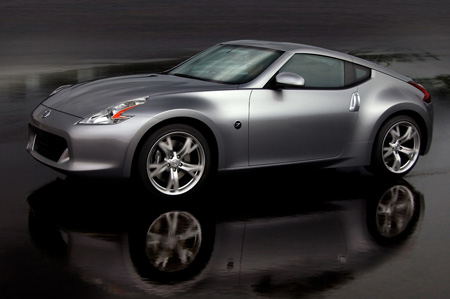 I wish I would like it. But i simply don’t. The headlights show an interesting new idea and indeed it works much better than on the maxima, but the rear is a bad setback from the predecessor.

What’s wrong with this filler flap? Is it eating up the rear fender?

ItÂ´s a shame but this one is not up to par with the TT. Did they get rid of the ridiculous crossmember in the trunk?

this one is not of the best.

Seems to me like they’re trying to evoke the old 240Z, especially with the shape of the DLO. I’d still rather have a 240Z in good condition than 20 of these.

What’s wrong with this filler flap? Is it eating up the rear fender?

It’s probably geared toward aftermarket replacement with one of those fake racing covers.

Maybe I’m just getting old, why can we just make pretty cars? I think there is a bit too much designer to designer competition with making things tricky that consumers don’t care about.

My personal comments for my own opinion are the same as with the new TT, that new Aston Martin, the new Jag coupe and this car. They have much better sculpting and proportions than their predecessors, but the details are too tricky and over thought for me. I like the current 350 better. It just suits me. I personally don’t like the GT-R either.

What I do love are the Alpha 8c and the new Maserati Granturismo. If I had the cash, that is where I would be… or a Vantage. I think the Pontiac Solstice is another one that nails it, the new Challenger, the Mini…

I think the Pontiac Solstice is another one that nails it.

you lost me right there.

the proportions of the solstice are hideaous in person.

european cars are so disciplined in their styling, i like them very much.

european cars are so disciplined in their styling

I agree with yo:

I think there is a bit too much designer to designer competition with making things tricky that consumers don’t care about.

And it isn’t just exteriors, is it?

Cup holders, “Navies” (they’re already being called a navie for christ’s sake! what? it takes too long to say navigational aid?), heated mirrors, seat-position memory (already died on our CLK), air bags, side bags, climate controlled air conditioning (remember 2-2-60 air conditioning (2 side vents open, 2 windows down, and 60 mph)), “Auto Start” (whatever happened to the simplicity of; get in the car, insert the key, turn the switch), tire pressure sensors, exterior thermometer …

i take a sort of combination between rk and lmo.

i don’t particularly like new cars at all. i do not want or need all the electronics. i buy what inspires me both visually and physically (driving).

i’ve mentioned before, i have a '92 miata that still impresses me after 10 years of ownership. i also have a '95 e36 m3. i bought that particular year for the lack of electronics and ‘assistants’ (also last year of OBD1), but for what i consider a design classic, inside and out. no power seats, no electronic traction control, no navigation, love the motor, too.

note both are RWD.

neither car has any cupholders, either

my wife gets the new cars. she drives a honda pilot which has all the personality and excitement of a wet sponge.

note, i just split out the other discussion that has been started on modernism in car design to avoid any confusion/thread jacking…

I may also be just getting old or have an affinity for old things, but I also tend to agree that most modern cars are overdesigned. Case in point, just look at a new porsche 911 vs. a 1960’s/70’s one. The new ones are nice, but seem bloated, with too much generous radius on everything. the interior is even more disappointing, and seems as though its been done by a completely different design team (likely it was). I realize things like safety bumpers etc. are partly responsible, and I can’t pinpo…

This year, as the 2009 Nissan 370Z is set to be unveiled next week at the LA Auto Show, marks nearly 40 years since the first Z car's simple origins as the 1969 Datsun 240Z. Since then we've seen the Z go all over the place, from tech-heavy with the...

some more pics showing up on the interwebs. the more i see the more i like, especially the refined profile that is closer to the original coupe shape. still not really my cup of tea and i would never consider getting one, but given the context i think it’s pretty well resolved and should do well in the marketplace.

As ash rained from the sky, the Nissan 370Z was just unveiled to an exclusive group of enthusiasts in Los Angeles ahead of this week's LA Auto Show. The event was hosted by Edmunds, but we managed to borrow a friend's GT-R and sneak in; all to bring...

I personally don’t mind trading in my 350 for the 370 since it has more power, shorter-wider-lower, taught lines, nicer interior, and .5 sec faster. The only hang-up I have are the boomerang lights and catfish air dam. But I’m sure NISMO can come up with an improved bumper.

Exoticdriven.com is for sale | HugeDomains

Get set up with a new domain name right away. Affordable payment plans to fit any budget. Friendly customer support.

I think those are the only things that bother me. But hard to get around the boomerang lights…

i saw one in person about 3 weeks ago in yellow. it’s not as bad in person as i thought. i concur about the boomerang taillights, tho.

i saw one in person about 3 weeks ago in yellow. it’s not as bad in person as i thought. i concur about the boomerang taillights, tho.

I often say to myself, even though the car looks so-so in magazines i’ll give it benefit of the doubt and wait to see it in person. But some cars look great in the magazine and in person. If I have to tell myself the car looks good in certain angles, looks good with body kit and larger wheels or lowered, then its not that great of a design. There are cars out there that look good in photos, amazing in person, and won’t break the bank.

Still the car would look a lot better with larger wheels to fill those huge wheel wells. 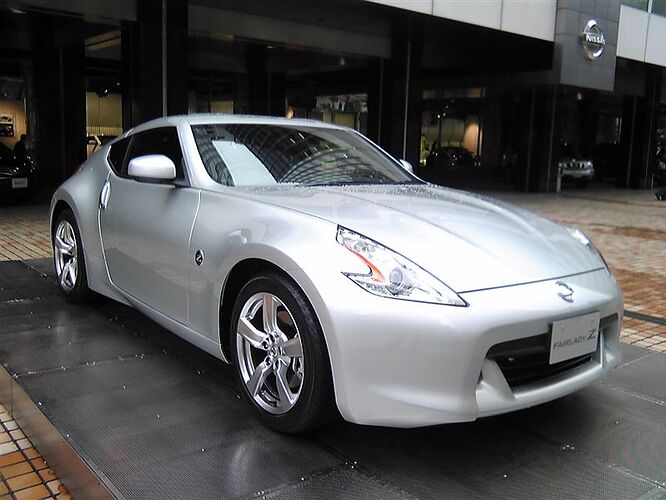