Hey everybody I’m new to this forum but I’ve been interested in footwear design for a while now and have posted on Kicksguide and Niketalk. So here goes my first post, and let me know if I do anything wrong: This is my current work and first work with my new scanner. Let me introduce it for y’all. It is a Kobe conept with Zoom Air in the heel. The toe is subject to change but is now a Foamposite-inspired thing I don’t really know yet I want it to be lightweight and flexible (quick question when the toe is covered with the material is it called double-lasted?). It has a carbon fiber shank plate that comes up the side on the lateral arch for stability. Aiding to the stability issue is the TPU toe strap and connected TPU piece that goes to the heel. Then comes the coolest part. The upper strap is removable. The logo on the back is connected to the heel piece with magnets on the edges (sketches will come). The logo is connected to the strap which can be removed and the logo can be replaced with a normal logo (without the strap). Let me know what you think…and I think the scan turned out fuzzy…how can I fix that? 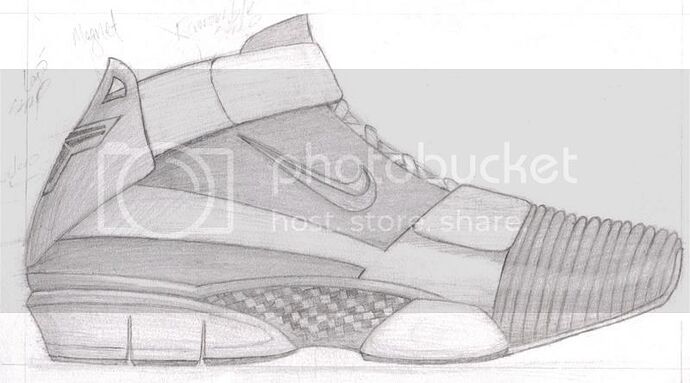 Welcome to Core, homie. Don’t worry, you can’t really do anything “wrong” (unless you cuss Yo out or soemthing).

I think your concept looks pretty good! Proportions aren’t too bad. I really like that you are putting thought into how it performs first and foremost.

It looks a bit heavy. Ask yourself if you really need the shank to come up so high. Always use the “minimum” amount of anything when you are trying to communicate “light weight”. Is there anything you could take away???

I forget who they were exactly (Yo would know) but these 2 Nike designers used to play ball on their lunch break and cut pieces off of their shoes as they played to see how far they could go and still play in the shoe! Just to see what was truly extraneous. I thought that was pretty inspirational!

Anyways, Maybe explore some options. What details tell us about who Kobe is as a player or person? What inspired this design? Why a forefoot strap? Just some things to think about…

Tony thank you I was really hoping after reading your advice for Ben that you would give me some criticism. I never thought about lightweight that way, I guess I just liked how the shank looked in my mind’s eye. I like the shank on the ZK1 and I guess its a little inspired by that. I think I have the same problem as Ben. I drew that shoe in like an hour because I was really focused on perfecting the look. Now when I’m looking at it, there are things I want to change, such as the toe. I want a cleaner toe because that is an element of both the ZK1 and 2 that I like. Anyway, I think I’ll spend some time just sketching ideas and come back with something better (hopefully).

By the way, that thing about playing in the minimum amount of shoe is crazy.

Nice sketch, hard to say much with just one sketch though, love to see more of a process.

A few things to help out though:

2> Form, right now there are a collection of forms that don’t necessarily flow together, for instance the shank is a long arch, but the outriger is a rounded trapazoid with no related forms to the shank

4> Views: is it asymmetrical, what does the bottom look like, that’s going on in the heel?

You have a nice eye for proportion, would love to see you take this to the next level or 2.

Just another sketch of basic linework I have been meaning to put up. No shading or anything yet. I’m kind of focusing my energy on the KG David Beckham thing…so this will be on hold but I will get back to it. I’ll have more time during the school year because I can draw all day in class. I can’t really do that at work… 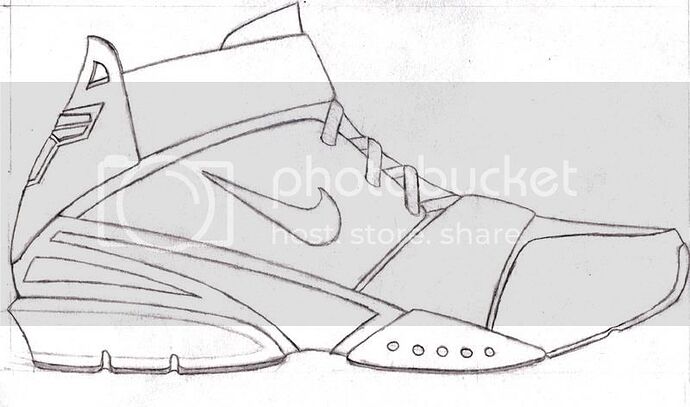 I tried to go lightweight-er with the sleeker look and cleaned up toe. I know I went backwards because the shank comes up even higher BUT…in theory the upper section surrounding the Nike swoosh is should be TPU (but the Nike swoosh itself is cut out) and the toe piece and heel piece should be leather. Under that, a mesh bootie. So its minimalistic in that respect and since that would be so light, maybe the shank could come up that high for ankle and foot stability. Maybe? One thing, I don’t know how to draw mesh or make it look like TPU and I cannot figure out markers for the life of me…yet. Hopefully, practice makes better. If any of ya’ll have suggestions on how to express those things in a colored rendering, that would be great because I like my idea with the upper so I’m thinking I will only mainly be reworking the midsole/shank area.

By the way, TH, MD, I have not forgotten ya’lls original advice. I read it like everyday and will work on it when I can. Thanks again!