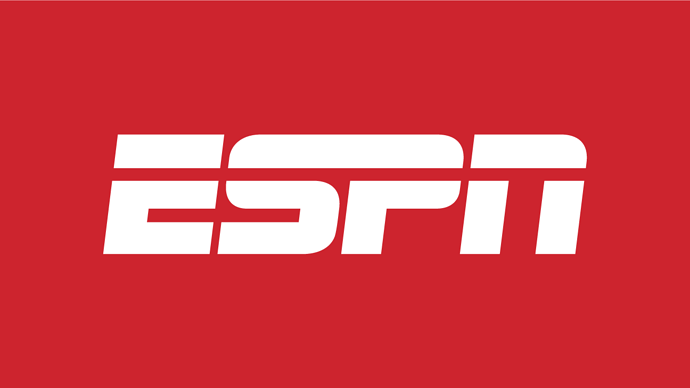 For years, the world's two largest shoe and apparel companies -- Nike and Adidas -- have battled for supremacy, with the competition occasionally leading to a lawsuit over a particular design or material, which one considers proprietary.

I normally get sued by employers for other reasons.

It’s nice to see that someone thinks design is so important!

The claims against Dekovic are pretty serious.

Good luck coming up with $10 million.

They will get crushed by their own legal defense even if they prevail. Lawsuits are a bottomless hole you through money in. Only the attorneys end up winners. Good contractual and ethical lessons. 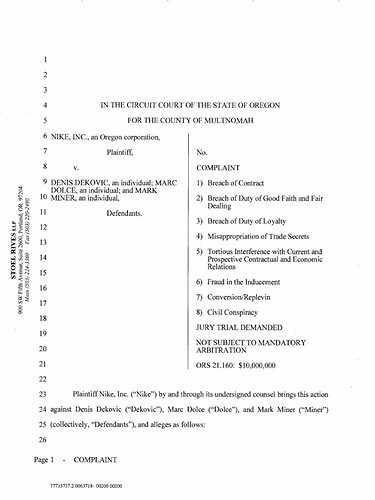 Wow, that document really lays out the timeline and grisly details of Nike’s argument.

Does anyone know the law in Oregon regarding non-compete clauses? (It seems like this is a big issue in the suit) I’ve heard these are not enforcable in Canada without compensation for the employee.

Does anyone know the law in Oregon regarding non-compete clauses? (It seems like this is a big issue in the suit) I’ve heard these are not enforcable in Canada without compensation for the employee.

It sounds to me that it’s much bigger than non compete - they’re going after them for what is effectively intellectual property theft, and if the claims are true it happened on company time with company resources (which is easy to sniff up with data forensics) then it’s a bad sign.

I’ve seen some instances of things like this where employees, especially those with product/roadmap knowledge will get hired to or from competitors as a way of “buying” information, rather than actually trying to go the old fashioned industrial espionage route.

I’m continually amazed at how easily information flows though, we’ve seen customers come in and basically describe/draw our competitors future products and completely disregard any NDA they may have had because they’re trying to get the best product. Which means you know that whenever you are disclosing something new to a customer, the NDA isn’t worth the paper it is written on.

I worked at a company where an engineer left for a competitor in the identical role, and was forced back with a lawsuit (plus a demotion)
if Nike’s claims prove true, this could revive interest in non-compete agreements, and would certainly be bad PR for the profession.

Wow!
That complaint is detailed. I guess it’s clear that Nike monitors all employee computers and phones very carefully, or they wouldn’t have all the quoted text, presumably taken from those deleted emails and phone messages.

It doesn’t look good for the defendants, and if most of the accusations are true, those guys probably shouldn’t work in the industry again.

What a shocker. Without even going into the forensics. I’ve been on a non compete before, would not have dreamed to breach it out of respect for my employer.

But I’m surprised that anyone would think it ok/undetectable to use their employers equipment to have conversations like that. Clever footwear designers but not at all tech savvy? I dunno if I’m a geek (ok, I am a geek, I admit it!), but everything I type on my laptop, every email I send, I treat it as if it was written on the back of a postcard. And just because it’s deleted doesn’t mean it’s not still there. I’ve recovered files for people before, it’s not hard. I’ve fixed dead tech, found those photos that were supposed to have gone forever. Everything you do leaves a trail, the system logs will show your activity. Whatsapp stores your conversations on their server, not only on your device, so not that hard to retrieve even if you’ve destroyed your phone. One of my friends works for the police in the UK as a forensic data recovery specialist. He can recover data from hard drives that have been deliberately destroyed, driven over, set on fire, you name it. He helped crack a drug dealing ring between futures traders in the city of London - simply by spotting patterns in email use (nothing incriminating was ever said in the emails), they figured out who was the dealer and who his customers were.

On that note, when I was an employee of a corporation (11 years ago, now), I always insisted on keeping my own cellphone, rather than a company cell - I claimed for the calls. People thought it odd. Well, for me, there are some things that a corporation should not have control of. I want to keep some of my privacy. One of my clients says I’m a free spirit, the corporate world really doesn’t suit me.

On the other hand, as a freelancer, for me client confidentiality is key - ask any of my clients who I’m also working for/what I’m working on and I doubt if they could tell you. I’ve turned down work because it clashes with other current clients I have. It’s really important to me to have both integrity and privacy. I hope we can all learn something from this case and I continue to follow it with intrigue.

I was listening to NPR last night and they were discussing how companies are compiling data. After I found out that my previous employer was monitoring my twitter account (I think they are the only ones to have done so), I just assume that if my employer wants to, they will get access to just about everything.

It’s unfortunate that we only get Nikes side in this case, because I wonder if these designers wanted to leave because Nike was getting increasingly paranoid about them, or if they left and Nike only found these things out afterwards…

The fact that the corporation owns you is why I don’t want to be an employee anymore. I want to be able to speak my mind, not bite my tongue. The thought of being spied on, the fact that you are a human resource rather than a human being. Nope. I’m not interested.

I suppose the hard lesson learned here is it sounds like they tried to have it both ways - the freedom of freelance and the security of being an employee. Well…you can only pick one.

But I’m surprised that anyone would think it ok/undetectable to use their employers equipment to have conversations like that. Clever footwear designers but not at all tech savvy?

I don’t think one has to be tech savvy to behave in an ethical manor. We haven’t heard both sides of the story but even if part of this is true it reflects very badly on trust in our business. For 30 years I have designed primary packaging for the all of the major fragrance and makeup companies – all at the same time. There are several other companies that do the same and it is the accepted trust that everyone keeps their mouth shut. And we have all done this without NDA’s. The behavior of these 3 designers is very bad and there are no reasons that excuse it. I’m surprised that ADIDAS even considered getting in bed with them as this kind of behavior eventually repeats.

I suppose the hard lesson learned here is it sounds like they tried to have it both ways - the freedom of freelance and the security of being an employee. Well…you can only pick one.

Actually, since you own the business, you are now “the man”. You can monitor your employees to make sure they are not stealing anything and everything from paperclips to intellectual property.

I certainly don’t know if the allegations made by Nike are true or not. It certainly wouldn’t surprise me if some executive has a bug up their ass about these three guys and wants to carry out some cruel vendetta. But we will never know because these three schmucks don’t have the resources to fight Nike. I suspect they will cya and settle with an nda. Both sides of the story won’t be known and will be sealed in court documents.

Shoenista: I work for a company that doesn’t have a human resources department:) Sometimes, you can have the best of all worlds.

I’m surprised that ADIDAS even considered getting in bed with them as this kind of behavior eventually repeats.

Yep I agree, when a design manager I never employed anyone who was willing to disclose the secrets or unlaunched product design ideas of anyone else. Perhaps Adidas was merely using them to obtain the business secrets? Who knows?

Shoenista: I work for a company that doesn’t have a human resources department:) Sometimes, you can have the best of all worlds.

When I was talking about security, I meant more the regular guaranteed salary and conditions that they were used to at their old employer. Going freelance, setting up a studio on your own, it’s a costly, risky leap into the unknown. I know people who hesitated for years because of this, especially those with families, mortgages, kids. Some people never do it for these reasons.

So if the lawsuit docs are true, it did sound to me as if what was desired was a freelance business with full autonomy, but with the security - i.e. the kind of salary and conditions they were used to and the only way they could do this was to get fully into bed with the arch enemy of their last employer. A risky strategy as we can see.

If only the best and brightest get access to this Area 51 of Nike, why did they give it to these 3 Benedict Arnolds? Maybe they need a better filter. Or maybe the things they stole weren’t that valuable…

It just keeps getting more interesting !! 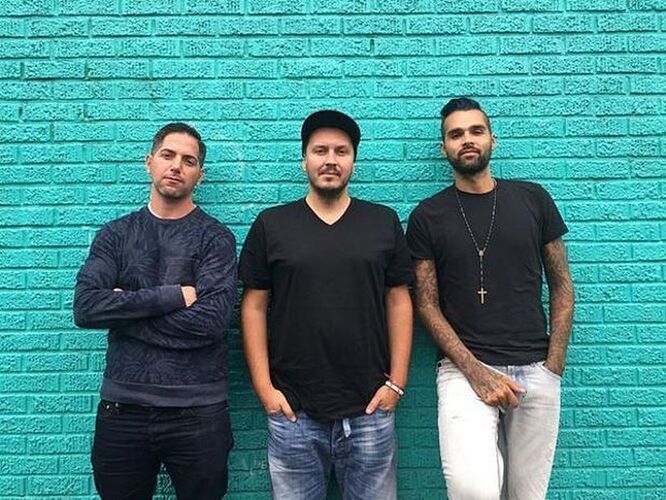 Nike accuses designers of scheming since March for Adidas departure 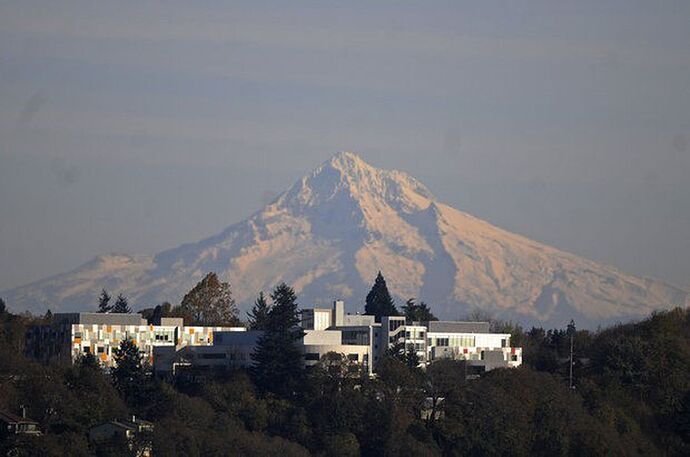 $500,000 salary proposal, other studio plans in recovered emails, texts of...