Just looking for some advice and feedback. Just a little project to further my skills. Hopefully you guys can show me where I’m going wrong… I’ll spend the next few days adding other views.

Signature shoe for Pops Mensah Bonsu (Who the hell is that? = Pops Mensah-Bonsu March 06 - YouTube )
I know there’s a whole bunch of players more likley to get themseleves their own line. But he’s a Londoner, and I thought the whole ‘whale killer’ inspiration was pretty cool (Whale killer? = See the youtube link^^^) 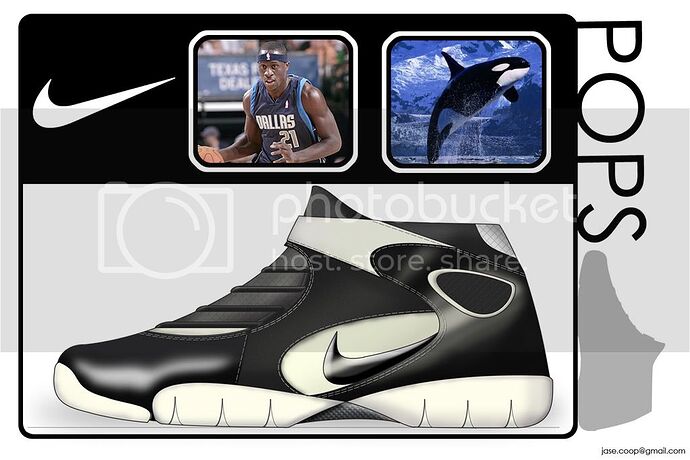 Look forward to some feedback, thanks for your time…

The_Boogey_Man: Hi!! I think you should look and find out more about whales and other elements for your design. the proportion of the shoe is good, but try to make all lines flow together. reduce the highlights and make the nike logo comfortable by placing it on the center of your oval shape.
You can find some nikes logo on google and trace it on illustrator, it will make your design better.
I like the way you designed your sole

maybe try to design it so that it will be one piece going all the way around the shoe. Hope it might help you

Hey Flight, thanks for the quick reply.

Hows this, I’ve made a few changes. With the Nike logo I was looking at the Air max’s and how the swoosh sort of pokes out…

Anyway, I moved the Nike logo over, and also put it right in the centre like you suggested, is this what you meant? Alo made some changes changing some sharp angular lines and rounding them off a bit. 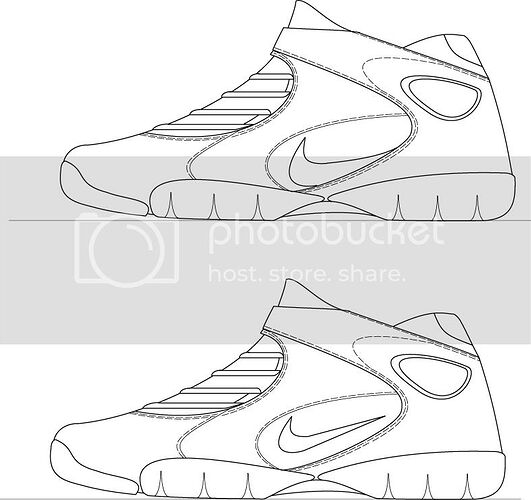 You have a good design, you just need to refine it. if you want you can get rid of the carbon plate exposed on the lateral so that the sole could be design in many ways. the carbon plate you have on the side create a “wall”, a piece that prevent you from designing your sole better. Here is a sketch of what i was talking about, hope it heps

The last one you posted is much better and the nike logo is really working. you can also play a little bit with your outsole design.

outsole and logo are coming along. would be great to see some different, more lose sketch variations of different concepts to see what features you can explore and play with.

also, check your proportion. seems a bit fat in the toe box, and wide in the collar opening.

your laces also look funny. perhaps its some sort of different lacing method, im seeing clearly, but the laces normally go perpendicular to the line that forms the curve of the eyestay/throat. hard to explain, but if you look at some pics of real shoes or other renderings, hopefully it will be clear.

I agree, a lot more upfront sketching could really push this one. Right now it feels like the swoosh is falling off, crowded to the bottom. In the air max example you show, check out the positioning. More in the midfoot. I also think you can push the outsole design. Right now it feels very early 90’s.

It may help to think of it more 3 dimensionally, Try sketching different views for awhile and come back to a side view. Sometimes I start with a toe down or an outsole. Try sketching the lateral profile of the outsole without the upper… is it cool on its own as a component. Try sketching the concept as a range… draw the way you see it and then try to take it further out in a series of 5 or 6 sketches.

Its a great start, keep pushing it further…

Ok I got some sketch work I can upload. Got no scanner right now so thats why I was just using illustrator. But bought myself a digital camera (after Hack2Schools recommendation, got the canon powershot) so I’ve taken a photo. Sorry its not scan quality, but you get the idea…

Got a bit attached to the sketches in marker (the black ones). Think I prefer them to the original render I posted. Think I need to sketch a bit more though… Let me know what you guys think, also tips of my sketching and how to improve would be good too. (The last photo is just some early sketch work before I moved on to illustrator). 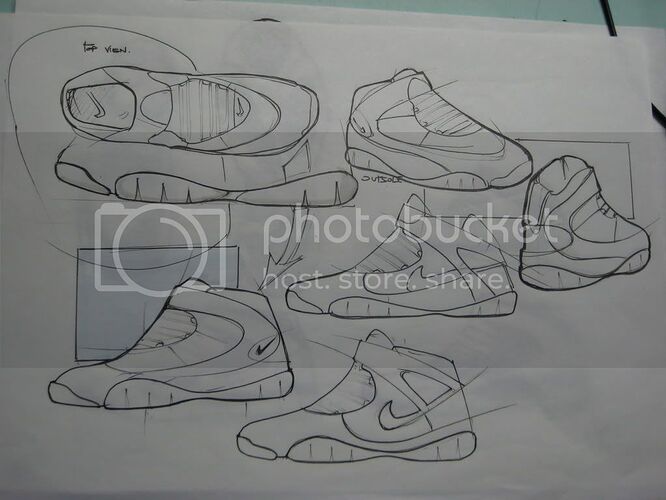 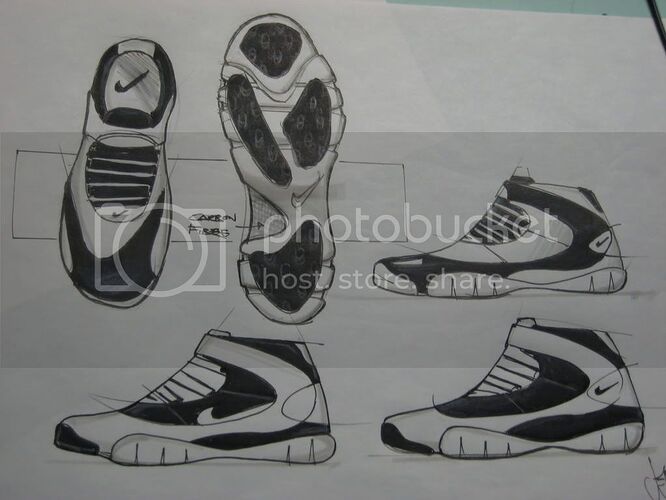 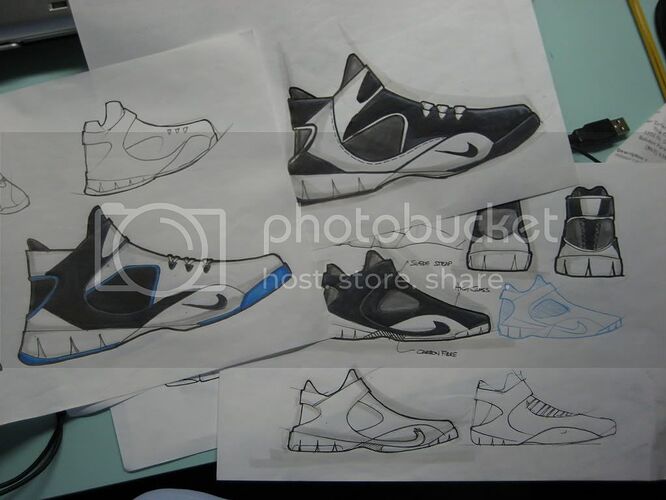 Oh yeh Yo, totally know what you mean about the 90’s look with the sole. I really like that era of trainers, I’m having trouble losing it though, I’ll have to work on it some more.

Thanks for the feedback everyone.

wow, your sketches are MUCH stronger than the illustrator work you first posted.

i really dig the one at the bottom left with the blue outsole and black and white upper.

gotta run now, but will drop some more specific comments later this wekeend.

good stuff so far, do remember to keep pushing your work. do not be hesitant to go away from your original idea or inspiration, use it as a starting point & see where it takes you…

Stuff looks like it is progressing really nicely. Good work! Try putting these away and spending a few hours on totally new ideas, then compare them with these and pick the best things from both sets… every sketch has the same outsole sidewall detail, try exploring a few new ones…

Once again thanks for the replies guys.

Been exploring more ideas today with some sketching. Going to do some more but i really like this design below… Let me know what you guys think.

Chung - Not at home right now so don’t have my scanner so can’t scan my sketches in. Though I still want to use illustrator and PS and improve my renderings. I’ll move on to that once I’ve found something I’m happy with. 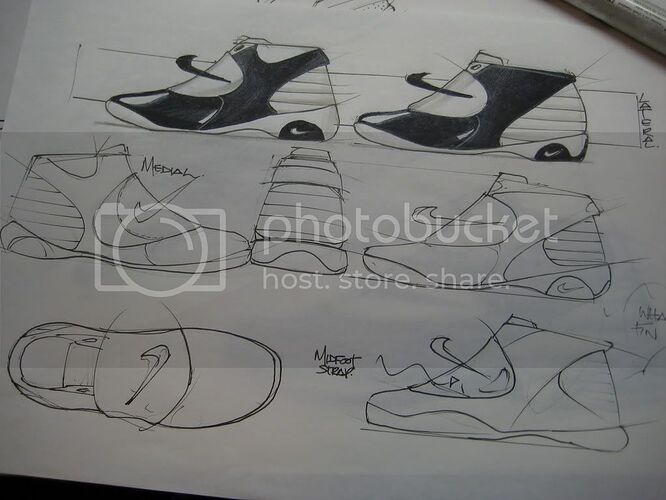 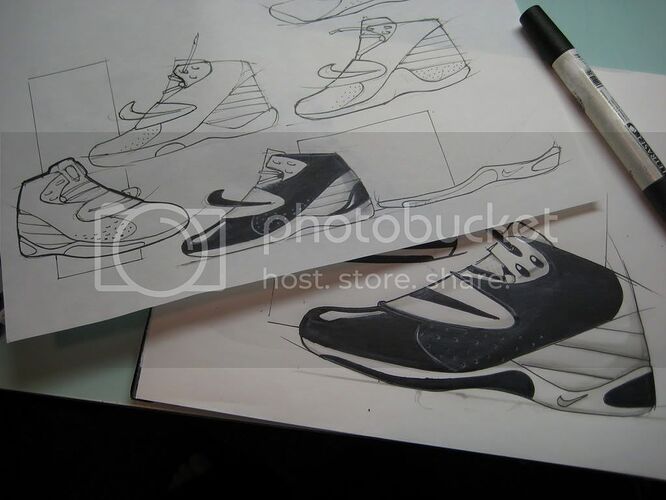 Nice sketches. You should use the sketch you like the most as an underlay and refine it as much as you can. you can add stuff or remove stuff