Here is an entry I was doing for last months KicksGuide contest, but didn’t find the time to finish it by deadline. So, here it is. Don’t have a ton to say about it, if you read up on it it’s for the most part self-explanatory. Anyway, that’s that.

You have a nice designer handwritten text. Looks good for a kicksguide project…I think the heel on your rendering is hanging over a bit much. The final design is not too exciting to me but looks good.

You could have used a template to control your proportions and like jm745 mentioned, the heel part is a little bit off. Also, the flywire could have been design in a new way,(maybe wavy lines, zigzaging…) it looks too much like those on the hyperdunk. I like the design but i think the overall proportion is taking it down a bit.

Thanks guys. Yeah, the more I look at it, the more it seems I left the heel to collar too steep. I’m surprised I didn’t notice that before, but, I thought overall the proportions were not half bad, besides the heel running up the rear of the sneaker and maybe the throat meeting the toebox is a tad high and not as pronounced? Overall, I left a little bit of room for personal style, but in the end it looks like it took away a bit from the rendering itself. Thanks again guys for the feedback.

And, about the Flywire design, yeah, I thought about completely revamping it. But, instead went away from the very straight and angular approach ie Hyperdunk and treat it with some curve, more organic feel. But, I see what you’re saying, there’s not a ton of difference there.

On my sketches page, I included the same quick sketch twice.

Didn’t notice until reading your comments. Funny. Have to go back and change that.

A couple of things. Always be careful how you use inspiration images. Right now they dominate the presentation. Scale, them, tone them down, and most importantly, show how they directly apply.

A little too much text.

Proportions. See the below attachment. I threw down a few lines to show how I would alter the proportions and harmonize the design. Right now the upper doesn’t seem to relate much to the tool. 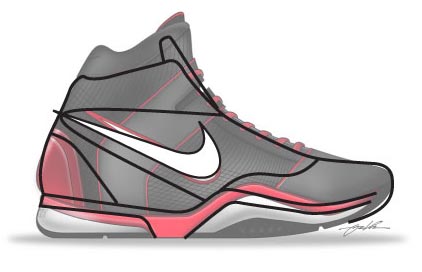 i second all the above comments. more specifically-

Keep up the good work. would be interesting to see a revision based on some of the above comments!