In an effort to not hijack the "Reebok, ZigTech, EA7 " topic and turn it into a completely Lunar discussion, I’m starting this one. However, it still helps to have read the aforementioned topic as a preface.

All the talk about the performance of Lunar and what we might or should expect from ZigTech lead me to wonder about the durability of Lunar cushioning (no longer technically Lunar Foam). So I posted this question on the Runner’s World Forums because I’ve seen comments from a few serious runners over there who have converted to predominantly Nike Lunar footwear. However, I’d never read any comments from these people on how the Lunars hold up after a lot of miles. (Ref.: Although some runners claim to be able to get up to 800 miles on a typical pair of running shoes, it’s generally considered wise to retire them at 400, and do no long runs in them with over 300 on the odometer.)

Ryan
thanks for posting. the forum on runners world provided info i must say i was not expecting. I didnt expect serious runners to rave so much about the shoe. Are you thinking of running boston in them? I started training for boston in my lunarlite’s but switched to a pair of asics cushioning shoes. I liked the cushioning and the feel of the lunars, i didnt feel i was running on stilts like i do with cushioning shoes. the last was a problem for my foot and blisters became an issue.

I fell in love with the Racers at the bottom when I saw them in all the blogs, so I had to get a pair of these swifts in the black neon colorway when they came out. I think they look pretty hot with dark jeans.

I’ve been running in the Lunar Trainers for about 6 months now and I love’em, my buddy who runs for Nike had been trying to get me into them since they came out.

I tried on the Glide when it came out and I didn’t like the fit. It was too tight at the midfoot, too much space in the toebox.

Nike’s so good at changing the game. 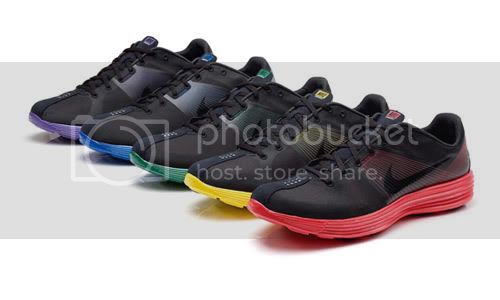 I tried on the Glide when it came out and I didn’t like the fit. It was too tight at the midfoot, too much space in the toebox.

this is true, thats how mine are too, the toebox feels really roomy but tight at the collar area. i also got a pair of air trainer 1’s and the fit is funny too, i actually had to get a pair of size 10 or 10.5 in those i think for my toes to have adequate room, i usually wear a 9 or 9.5. im not sure what is going on with their commercialization these days.

Nick, I’m considering running Boston in the new New Balance 740 (a club sponsorship thing). I actually had my LunarGlides before the Twin Cities Marathon (where I qualified for Boston). I couldn’t make up my mind between them and the Brooks Adrenaline 9 until the morning of. I ended up going with the Adrenaline because it was more tried and true for me. I did most of my long training runs in the Adrenaline. The LunarGlide being so soft, is a little less stable than the Adrenaline, even with the Dynamic Support feature. I also read comments from some runners about the LunarGlide not really “being there for you” at the end of a long run. That’s an issue, however, for any shoe with foam-based cushioning. At the end of 3 hours of pounding, it has compressed quite a bit, and won’t decompress until you take them off for a few hours. You don’t get that so much with mechanical cushioning like Air, Hydroflow (as in Brooks), or Skydex (Pearl Izumi). I’ve still got 6 more weeks of training for Boston. I’ll do some of the long runs in the LunarGlide and see how it goes.