Has anyone else noticed how Ford integrated their third brake light into the design of the 2010 Fusion’s trunk? I noticed this yesterday and it impressed me at the attention to detail. I really like the back of this car in general too. It seems like hexagons are very trendy right now, especially in the VW group and on this Fusion. 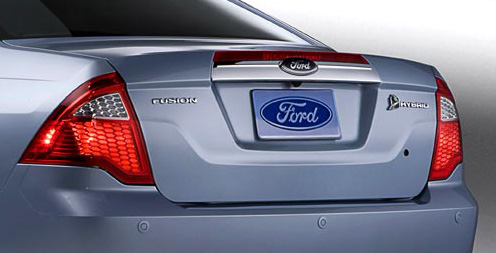 or… it could have gone behind the rear glass instead of ruining the visual of the top line of the trunk. It’s a nice thought, but it is penny wise and dollar foolish in my opinion. It’s a good back end… nothing to write home about though.

It used to be under the rear window glass, they moved it. I actually prefer third brake lights integrated into the design somehow, rather than have a little box screwed the panel under the rear glass.

I’d say it goes like my image below: Good, better best.

As for the Ford Fusion overall, it’s my fav of the following, designwise: Camry, Accord, Malibu, Galant, Sonata, Mazda 6. I haven’t seen the new Legacy, but I’d say the last one was as nice as the Fusion, but in a more generic way. 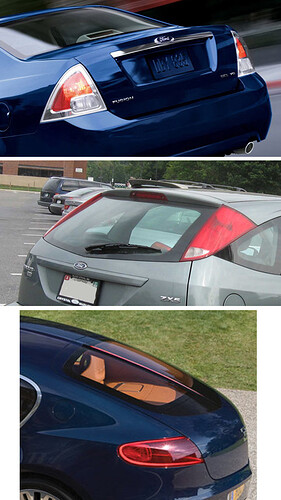 The detail I’m liking there is the crease that runs from the taillight, angles down, under the plate, and across.

The 3rd brake light could have just replaced the chrome strip in my opinion, instead of going above it.

Where the new Fusion really shines is the front fascia, best looking thing to come from Ford in years. What I don’t understand is why Ford can’t figure out how to design the SIDE of a car? The Edge is the only thing in their current lineup that does it properly IMO.

914, thanks for making my point for me, the old back end is way nicer. The new one is over designed.