This is so far off topic it may be actually be on topic.

Someone missed their calling. Anyone care to speculate who’s hand lettering this is?

On the diagonal no less…

who is that? Lynsay Lohan?

who is that? Lynsay Lohan?

Steady hands for someone on that much blow.

The secret message on the middle finger gave it away for me. She had that in court the other day and was nearly held in contempt (she inscribed it on her finger IN court) Sorry. My wife reads gossip mags, therefore they’re easy to pick up.

The uniformity of it is what kills me; perfectly vertical and consistent font size, nicely kerned, parallel line spacing … and all on the freakin’ diagonal, in the corner of a sheet of ruled paper (which by itself would throw most of us off if we tried to keep it tight). And she’s just sitting there noodling along without even thinking about it.

There’s something going on in that head that’s being wasted (with no pun intended). Too bad.

Every designer in the world wishes they could letter like that.

Now I find her really hot.

Is this her hand writing?
in the notes she repeatedly refers to where self as LL. is she taking notes in 3rd person?

Since this has already been declared off topic and we’re typographically slumming thru the scandal sheets. Did you see this from the owner of the Cleveland Cavaliers:

All in comic sans. This guys is off his rocker. I feel for the town, but c’mon.

Ugh. There’s absolutely nothing worse than Comic Sans. Nothing. Not even Brush Script.

hahaha, I remember seeing one of my wife’s production books she put together for a meeting… it had Comic Sans on the front cover.

I was so embarrassed for her I had to reformat the whole thing and made her swear to me she would only ever use Helvetica in the future.

While we’re on the subject of LBJ, did anyone see the cover of today’s Cleveland Plain-Dealer? Very, very nicely done. And a perfect dig publicly. I’d love to see a Heat/Cavs game in Cleveland next season. 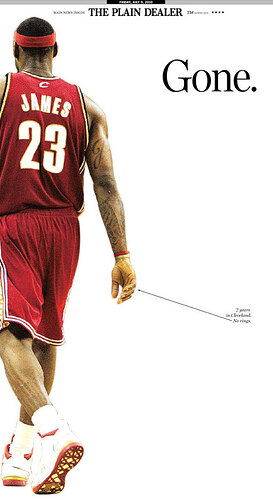 Ugh. There’s absolutely nothing worse than Comic Sans. Nothing. Not even Brush Script.

you’ve probably seen this before but I thought I’d share.

I ordered a framed and autographed copy of this comic and have it on the wall next to my workstation.

Comic Sans gets his revenge