The news has just been released in the public domain so I can finally post some work here on an ongoing project. It’s for a new athletic footwear (running) brand, SKORA, that I’ve been working with since the inception over two years ago. I created the brand positioning from the client’s original conception, and as well have done the identity design, footwear design and will be working on all things related from packaging to marketing, POS, development to production, etc.

It’s been an exciting project, as so many of my current projects are, working to develop a new brand and associated philosophy, product DNA, and identity from scratch.

The concept is for a more minimal, modern, and barefoot-like running experience.

You can read more about the brand here-


Below is a rendering I did for one of the design that was to be featured in an LA Times article, but the illustration got cut last minute (though there is still a section of the article talking about the brand). Feedback so far via the brand’s twitter feed as well as a Runner’s World forum have been very enthusiastic and I look forward to helping bring the brand to life! 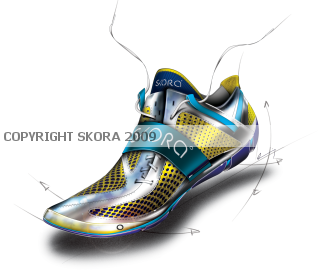 That rendering is just sick. Mad props.
When does the article come out? and what inspired the logo?

That rendering is just sick. Mad props.
When does the article come out? and what inspired the logo?

thanks all the render was actually a quickie because I had to do it last minute to meet the papers deadline. I would have liked to put some time into it so might come back to it later.

The article is up now. You can search the LA Times website for it. As mentioned, there was supposed to be more on the brand (the reporter did two full interviews) but apparently editorial directions changed.

The logo was inspired by a few things, but overall was supposed to be clean, minimal and modern like the brand.

Very cool to see a product of your “All encompassing” firm. Congrats on the new product. I’m not too into footwear design, but the render looks like a track running shoe? Is that the case? Or is it more of a running, lifestyle, sort of a thing?

Nice work on the logo, I look forward to seeing the rest of the branding.

Loving the sketch, especially that rubber mesh texture. I’ll definitely pick up a pair when they’re available. Good luck with the launch!

Nice to see more running shoes with the “barefoot” philosophy! I honestly think there’s an emerging market for this sort of thing…

(Side note: anyone read Christopher McDougall’s book “Born to Run” yet? I haven’t read it yet but it’s supposed to cover a S. American tribe that runs hundreds of miles in sandals…)

looks cool R
I’ve been keeping an eye on the whole barefoot running shoe movement for a little bit now, from nike free to newton, at some point i’ll probably try a pair.

im also curious about the logo, let us know what inspired it, it almost looks like it could be another word when viewed backwards or upside down or something. The “SK” part is neat, do you intend on that being the shorthand version of the logo that gets put on the side of the shoes or anything?

definitely keep us updated on this!

Ahhh… the barefoot running concept. Cool. I get it now. Excited to see some in person.

Ooh looking forward to hearing more about this, I wondered what amazing thing you’d been working on! Must’ve been lots of testing?

Great stuff - sick render! Looking at your website, I’ve wondered what product’s you working on too. It’s great you get into the entire branding side too - it seems intriguing.

about the branding side, I was wondering if you could share any insights or methods for how you approached the product positioning/identity/DNA to compete next to other footwear out on the market…

Time for an update.

The project is now going ahead full steam.

Currently under development in China. We’ve developed our last, have full specs, looking at a few specialty material suppliers, have an A-level fty in place and already underway with outsole development and expecting first pullovers of the uppers next week…

Thought I would share some final renders in the public domain I’ve made since this topic was last updated.

Images kindly provided from an interview with the client here:

There was also an outsole render done, but I don’t see it online, so will not release any additional pics at this point.

I’ve also created the layout and design of the latest web and twitter presence, further extending the brand consistency. 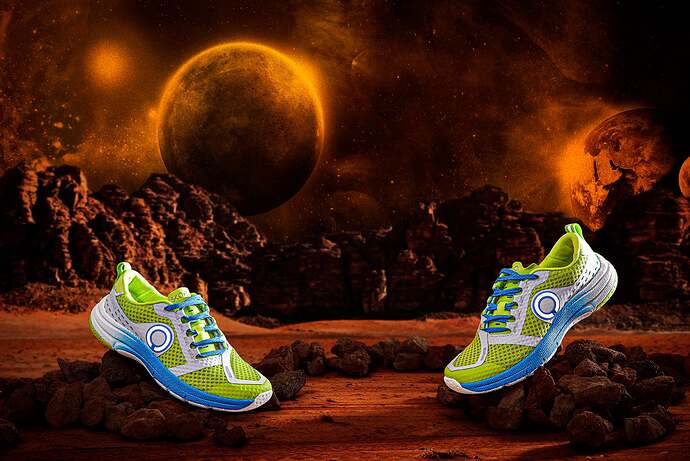 SKORA high-performance shoes and apparel offer great-looking, minimalist construction and top-quality construction that lasts so you can love your run.

Looking cool Richard, especially the offset lace version. There is this image of the outsole…so maybe it’s ok to post a rendering

the barefoot shoe market is ripe for some slick design. The Innov8 195’s are probably the best athletic shoe I’ve owned, but their design is a little 90’s . With NB’s Minimus line due in March, it’s looking like 2011 will be a good year. 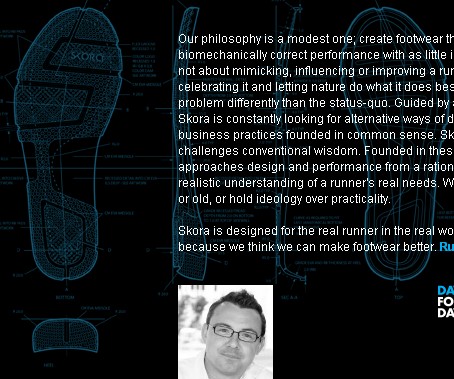 Outsole render isn’t up yet so I’ll wait.

sweet man! Thanks for posting them!

Sweet, congratulations on all your work coming to fruition.

Can’t wait to see the real shoes; barefoot running is a phenomenon I’m curious about.

Long due for an update. Things have moved well along since the last post. I’ve been to China and back twice this year on the project and had countless hours in design, development and marketing and production aspects into it.

At this point, , we’ve pretty much completed development and are expecting Sales Samples to arrive shortly for SS12. We’ve done an intensive weartesting program with a total of more than 600mi put on the shoes, including a tester who just ran a 100mi ultramartahon in them last weekend. (http://www.runningonthewhiteline.com/2011/09/talk-about-having-gas-left-in-tank-and.html)First word is is that the shoes are great and we’re already working through the comments to make them even better for production.

Some more pics at http://www.skorarunning.com

Can’t wait till these are out and I can share more process and pics. I’m really proud of this project and it’s something I’ve been working on for more than 3 years now since inception. Initial reactions are this could be the shoe to beat for the segment, and all that despite being our the brand’s first product and from a small start-up at that!

Already hard at work on FW12 and beyond…

Awesome detailing in the sole! Looking forward to seeing the final product!

Yes, very cool how the outies nicely transition to innies! Not sure if I’ve ever seen that before!