Before checking out all the pics from Manifest I was thinking about getting a new city bike. After checking out all designs and I am pretty revved up to get pedaling on a new iron steed. Since there are a about 7 bazillion different designs out there, I was hoping the kind members of Core77 would offer up their suggestions as to what the best casual urban bike for a guy like me might be.

About my riding habits to give a better idea of, quite literally, how I roll:

Here are few images of bikes that I like:

I’ll add more later, but you’ll never get anything like a Short John for less than $3K in the US. And the Civia Loring is also pretty spendy.

But! There are options out there… I’ll be back later.

I totally agree. I like them but the Short John is for sale here in Chicago for a lovely $2300. The Civia base model starts around $900 so it is doable, but right about at the upper limit.

I thought about a Flying Pigeon (about $260 delievered), they are not so bad as far as price, but quality is always a risk. Plus I would have to add racks (sturdy racks, that is) and change out my rear hub to add in an internal gear. I suppose could throw on a Sturmey Archer 3-speed and get to cruising

This company just launched their North American operation on Friday . . . they must have learned I was shopping.

They have a bikes that nearly fit the bill:

This one is probably a little nicer, but it is also a bit out of the price range.

Have you checked out workcycles already? Just saw they have US resellers. 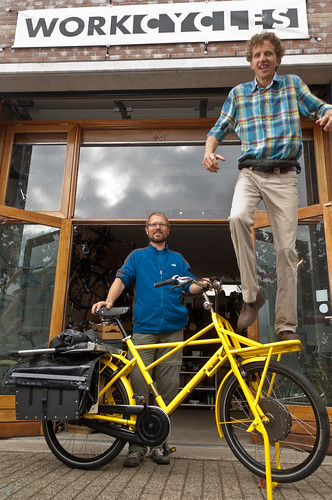 WorkCycles - the pioneer in bringing the beauty of Dutch cycling

WorkCycles is the bakfiets, workbike and hand-built city bicycle specialist, known for our innovation, timeless, top quality bikes and emphasis on service.

If you haven’t browsed through the website of Clever Cycle in Portland, they’re pretty much the local experts on city and cargo bikes: