35 years without a rig was just too much.

Just off the trailer.
1963 Dnepr K750; Ukrainian; military surplus; project is to return to military livery. 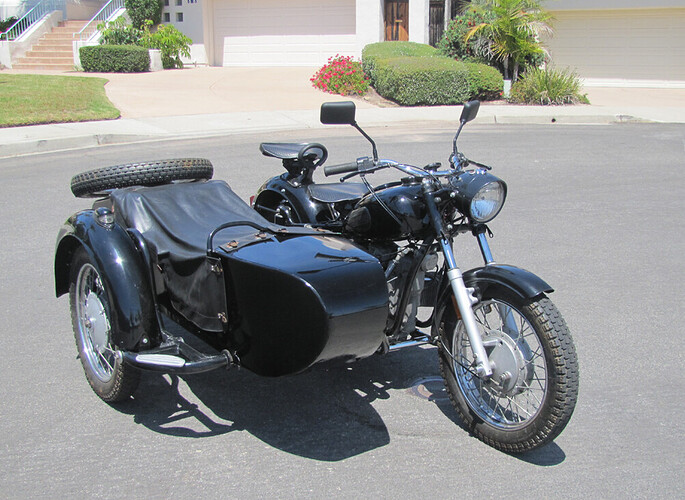 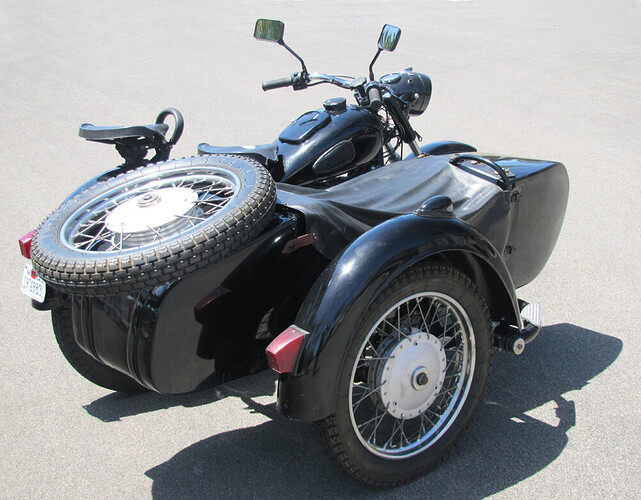 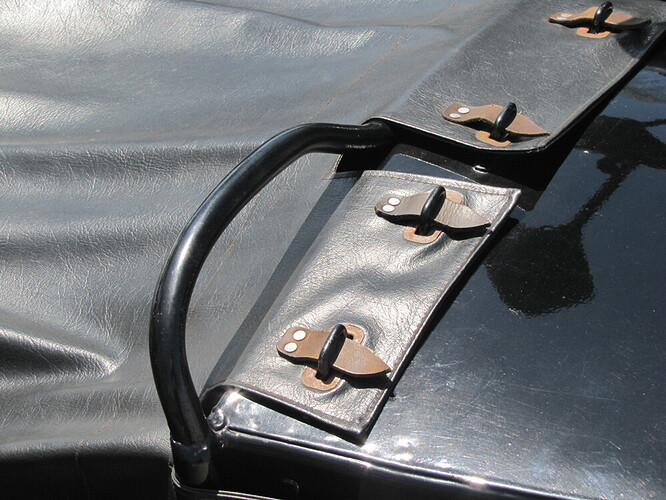 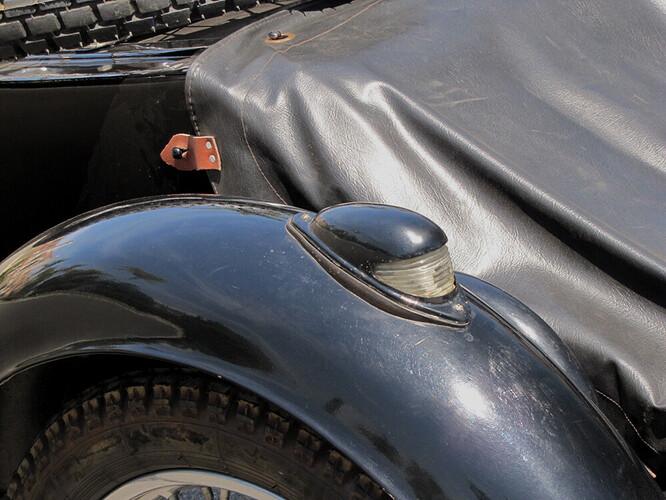 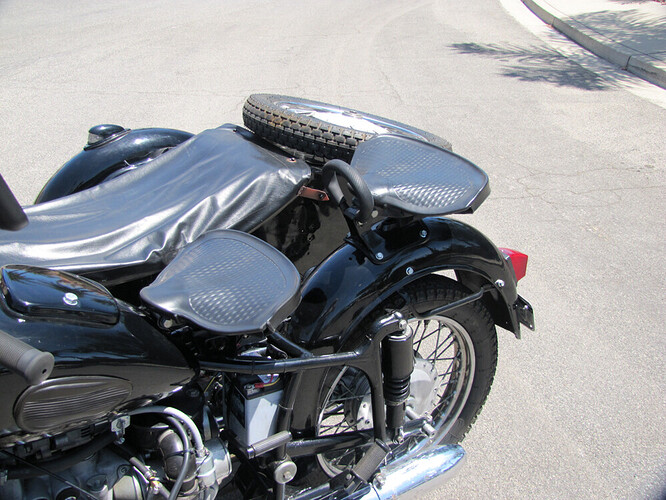 That’s really awesome, Lew! What does he military livery look like?

. . . and the Terraplane!! Holy cow. Whoa.
Worked in an accessories shop in the 80s - sold and installed a LOT of Vetter equipment, but never got to touch a Terraplane (we didn’t carry 'em).

Dnepr (Neper) went out of business in 1992, and Ural (who is still in business and whose machine you’re probably seeing lately) both built, essentially, the same motorcycle for the soviet military with a few differences. Virtually all of the major components are interchangeable. The Dnepr was strictly a military vehicle and classified as a “heavy sidecar”; the wall thickness of the frame tubes is around 5mm.

And you can find them scattered across most of the planet. The Chinese built this same machine which is known as Chiang Jiang, and most of it’s components interchange with Dnepr and Ural.

All of the above to get around to saying what livery I’m going to shoot for (dpun) … I’m not sure yet. They run the gamut from black to green, tan, gray, etc. A common theme is flat finishes, and lots of odd stuff hanging around. Not at all inclined to mount anything anyone would want to shoot at however. 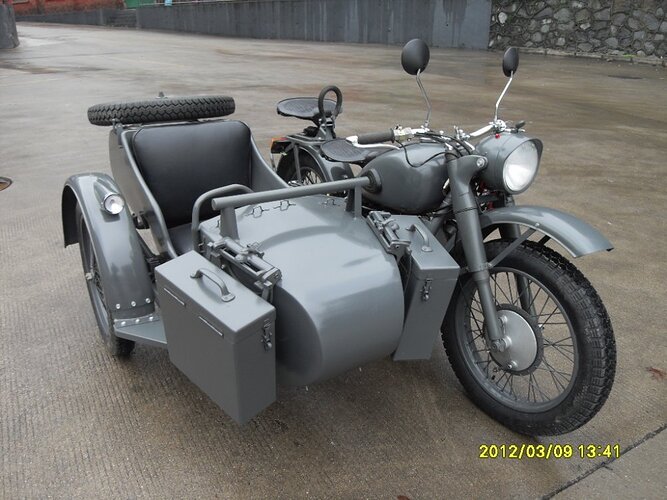 All three are direct descendants of the WWII BMW R71 so I have several options to play with. 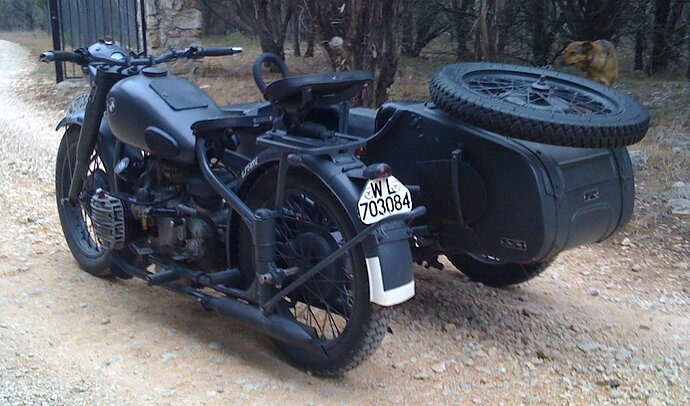 My wife’s hip is starting to go away and she finds riding pillion to be too painful. We’re planning on camping the sh*t out of this thing and will be able to haul a lot of stuff.

Sweet! I’m looking to get an Ural as well. Was pretty close last summer, but didn’t have a suitable garage for it.

From what I’ve read, Dnepr was building the civilian version, while Ural was military.

Aand, Discovery did a feature on the factory a while ago:

Ural has been quite successful in placing their brand into the media.

It’s particularly fitting that they brought the “caveman” back to the front with this machine. Ural and Dnepr both are not sophisticated machines, crude might be a better adjective. They were designed for cross-country off-road operation and most owner do their own maintenance out of necessity.

If y0u are in the market, this is the best time of year to be looking around … winter is coming. Most of these bikes are purchased on a whim. Their owners ride them for an average 4500-5000 km and then move on to the next diversion. 2006 and later is the model year for Ural purchasing; improvements in the electrical system (Nippon-Denso) and brakes (Brembo) being the key improvements.

That said, there is a large Ural/Dnepr community across the county. 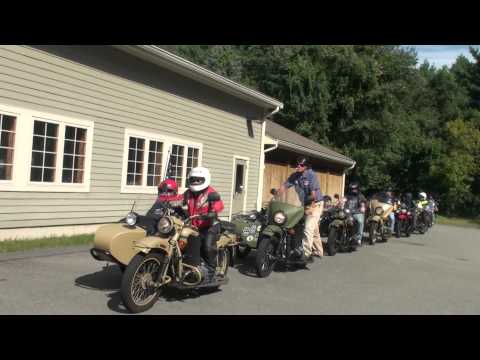 Wait… what is Geico? NA Ural distributor? I don’t see any mention of Ural anywhere?

I’m in Sweden and not NA, but there are almost always a few for sale here as well… ranging from 60s to 90s models…
I was thinking about going over to St Petersburg, Russia, and drive one back here. But the thing is, you can find them there dirt cheap, but noone seems to take care of them. It’s a farmers tool over there, used for transporting sacks of potatos over dirt swamps. A 2006 sounds more like my cup

great to see you back here. Best of luck with your project. Even if I can’t relate to the romance of buying a Dnepr. Hope itll serve you better than I think.

Even if I can’t relate to the romance of buying a Dnepr.

Es ist eine Krankheit! And they ARE essentially an agricultural vehicle, AND not often taken care of. The Dneprs that show up over here are “kits” imported into the US as parts and assembled for resale.

This one is a bit ahead of the game in that it’s previous owner installed 2006 Ural drive train; engine, transmission, drive shaft, and final drive. But they are … crude by western standards. For example, more of the internal fasteners inside the final drive are assembled with slot-head screws.

Like I said, it’s a sickness… I’m going to drive the wheels off of this thing (which may not take as long as it sounds)

Obviously you knew perfectly well what you were getting into and went into detail with an open eye. I sure hope with you that all nuts and bolts stay tight.

I sure hope with you that all nuts and bolts stay tight.

M, I’ve lived my whole life with most of my screws loose. … …

I went into it knowing it was going to be a project. I spent the weekend rewiring the entire machine, stem to stern. I’m planning on riding it up your favorite stretch of twisties this weekend. Fish & chips on the back deck at Nepenthe’s beckons.

Hope all’s well on your side of the pond.

How did I see a reply like this coming?

But I somehow deserve it, mocking your latest toy. Thanks for evoking memories of the pacific sun on an overcast December morning. I’d love to do that tour again with the girls, but we would have to go in a camper and that would probably be outhandled even by a threewheeler.

Have fun riding up there and report back here when you made it.

The old SoCal weather card. I love using that one too

Lew? Are you back yet?

Whish you many happy rides in a happy New Year!