Pictures can really be deceiving, let’s hope so in this case. It looks a bit American…

I’ve never been a fan of SUVs or the M-class; I always thought it was rather sleepy looking, and a bit too tall.
This one looks like a cross between a Buick Rendezvous and a Toyota Matrix, but with a facelift. I’d rather drive it than an old one, though.

I’m intrigued by the gauge cluster - it looks quite colourful (an advantage, IMO)…anyway, it looks better than most of the generic clusters you see today. I don’t know why car manufacturers don’t put more effort into the little things like that.

I can’t find a picture of the key from the Carrera GT, but it’s even more elegant - a silvery teardrop with no teeth on the key itself, just a wavy line running down the middle, and it fits flush with the ignition as if it’s a part of the car.

Then you have the key that Ford includes with its GT - just plain “FORD”-embossed black plastic. Oh well.

Anyway. This new M-class also looks smaller than the old ones - perhaps the track’s wider, I dunno - but it looks decent overall.

I think it looks pretty standard Mercedes aesthetic. It looks like they have tried to give the M a little more aggression by emphasizing the wheel arches. Also, the rear looks a little more encased, which is consistent with consumer’s being afraid or not wanting people to see into their trunk.

Arclight is right about the RavA’ look. That surface detail over the doors looks lifted off the RavA’

I don’t think the Ferrari key is well designed though. It looks big and clumsy, not like the cars they make. VW has by far the best keys with the little flip out.

It looks like Merc is trying to incorporate the bimmer flame styling, like above the tailights and wheel arches. the lines all look unrelated. Not a good direction although a little more memorable than the previous ML minivan. Interior looks a bit plane, but nice and refined, at least the driver will feel good while lookin bad.

I can’t say I was a fan of the old M class, but this really looks like the Lexus SUV or the toyota matrix/rav4. Not as bad as the Buick, but not unique in any form.

Has Merc ever been unique?

Has Merc ever been unique?

Im sure I’ll get flamed because theres probably some obscure case of this being done before, but this was pretty unique:

The first one harks back to the Messerschmidt and the Morgan three-wheeler…to me anyways.

The second isn’t too far from a SLK and I bet that if we were to browse enough, we could find a similar concept car.

Mercedes design in production has been built on being conservative. For example, take a look at the slope of their grilles over the past 25-30 years. Every generation it slopes back a further 2.5 degrees until you get to today. That is evolution at a snails pace. In the meanwhile, they haven’t ever really broken the mold. This isn’t a bad thing, I like Merc design, but it’s not pushing the envelope.

you got to go back to find some reall origionality, but what about:

The gulwings where hot, the blisters on the fenders allowed the wheels to be closer to flush with the body sides. Compare it with the race version below and it is a big difference in stance.

The origional racecar had a smoother, pushed back snout. 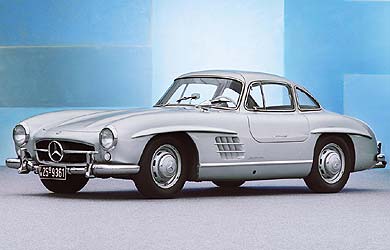 While in production form the grill canted in the opposite direction to accomodate the bumper.

The bulge on the hood allows the hood to be lower and still fit a straight 6, the other bulge is cosmetic, but it makes an otherwise simple form look a bit meaner without all the bells and whistles they are using today (did those come out of pontiac’s closet?)

Of course there where other cars of the time that where of the same vein, but in 1952, this was on the forefront.

After I said they didn’t do anything too innovative, I thought of the SL too. I was hoping everyone forgot about it after the new SL-R stole far too much space in recent magazines. It was a great car, with great style and very original.

I’ve never really liked Mercedes, so I guess I’m a bit biased here. Anyway, to me this car looks like it’s about to fall apart. Probably because of the unrelated lines, as mentioned by timgolnik.

As for the Ferrari key: is this really an original Ferrari product? It looks like all those terrible Ferrari spin off products (official and fake alike). Make it red and you can call it Ferrari seems to be the mantra.