I was just wondering what people have bought recently. just to get an idea what people are into n stuff.

I recently bought some nike hikers.

they were on sale and i liked the style. they are light weight and keep clean in nyc streets. well they look clean-good thing with blk shoes. i love the sole. it has a great design very nice what they did with the lugs, not so broing as in other hikers. nike (ACG) has been working with vibram for there soles-I think vibram has helped them out alot.

and also got these back home-a lil christmas gift to myself. they are older, still a very hot style. I really dont wear bright green, but made some exceptions.

they are very comfortable-took a day or two to get used to the arch support. the one thing is that the outsole (profile) could be better. it looks too blah. the air bubble holes look and are positioned fine, but the cuts i dont think are deep enough maybe just a 1-2mm deeper and the side would look a lil more dynamic,
they were also affordible.

kinda sukks-and is wierd that depending on where u like in the us you will get different color styles of shoes-anyone else notice tht-will post example.

I recently got these:

What do you think… also bought on sale, and because i badly needed new ones, my old Duffs were literally falling apart. Anyway I got them really cheap because they were an odd sized pair (I happen to have one foot bigger than the other… a good thing in this case).
They are good and comfortable… with nice cushioning in the heel and ball of the foot. The thing I like about this is that it’s firmer than in most kicks I have had, which feels to me like its giving more effective support.

I don,t have that much money, so I don’t buy shoes very often, but my last buy was the Wings & Waffles edition of the Air Huarache

I love how the upper looks and I thought it would be a really comfy summer shoe.
On the downside, there is one thing I have come to dislike about the design. The back portion of the midsole is huge. I think they could have done something less plain with the midsole and the outsole, but overall the shoe feels great.

Not quite what most people post but I got these for winter and they are extremely comfortable. Cole Haan waterproof boot with Nike Air sole.

that is a very clean looking boot. I like it! especially the stitching

got a couple pairs of chuck’s myself, like a porsche 911, they are never out of style.

A couple of pairs of Diesel dress type shoes. I got these in Charcoal as well as in Tan.

how comfortable are they?

These are the newest shoes i got…the lebron 2’s are pimp! theyre based off a bullet proof vest. the nike shox classic are awesome too! old school look with new school technology make a gorgeous combo! i’m surprised there was not much talk on these, these are an instant classic IMO. i had to get the air force 1 whi/obsidean for its classic style and thefinishline.com has air zoom generations for only 49.99 (black only) since i got the 2nd lebron i had to get the 1st! no more shoe buying for me though until the air jordan XIII white/navy and flint drop out this march!

nice pick ups robot, i can not agree with you more on the lbjs yet to pick up a pair but i did get a pair of one of my favorite sneaks—the hyperflight in black/red my second pair—had to send the 1st ones back due to a defect, probably will try to find one more…a pair of the yellow & balck joints–fiyah

I got these a few weeks ago from Niketown. 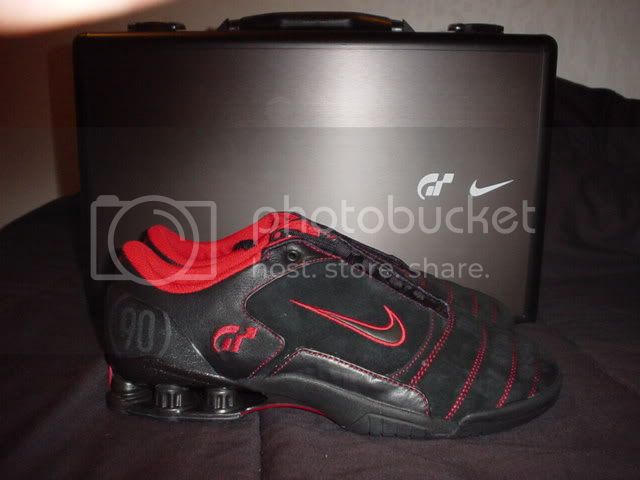 hmm-image? what are the names of them? what is the link to the site where we can see? I have never bought from niketown.com. how long did it take to get your purchase? I wish that they had a mens catolog like how they have a womens catolog.

hey, which niketown did you get them from??? did you get them game with it??? i know it japan/asia release the shoes came packaged with GT4 but for some reason i think they scrapped it here in the states. i want a pair of those just for the case, good pick-up.

I just purchased these adidas- for basketball-league at the ymca-they were stiff at first, still working them in. I found myself slipping when i made sharp turns with the basketball shox-I am trying these out and seeing if same will happen-I like the simplicity, and the show has my no./ 21 on it. thats a bonus.

here’s a link for more information-

Good call on the diesels from Yo (even if he does have poor taste in Footwear sculpture). There is an interesting pre-occupation with Nike here on the footwear boards. I just picked up a pair of the Starck Pumas, pretty nice, comfortable, but too expensive. As I always say, cant go wrong with Gucci loafers, like Chuck Taylors, and 911s, although the Gucci loafers will go better with the 911 than the chucks, especially the driving version. I also picked up some kickers on a recent trip to Brazil, where even cheap footwear has a level of design.

just recently picked up the bball 180’s. nike’s killing it with the retro stuff. i had been a recovering sneakerholic for the past year but it looks as if i’m going into relapse.

quick thanks to YO, the mod. very helpful in his posts and replies, not condescending at all. it’s nice to see people who work in the industry PERSONALLY helping our fledging field of ID grow.