The Kia would look a lot better if they had ignored the guy in Marketing who said they needed a fender vent. Such clean sides, and they go and poke a random, useless in hole in them. But still, very nice. Hyundai/Kia is doing everything right at the moment.

Kia NAHQ is about a 2 miles from my office here in irvine. i see a lot of the kia/hyundai models cruising around before they hit the lot. the mazda nahq is 3 miles south, occassionally see some of those too.

it reminds me growing up in detroit and seeing the camouflaged prototypes cruising around the burbs.

Did you see these coupe photoshop renderings… not bad. They have a good looking car on their hands, well proportioned.

2023 Hyundai Sonata vs 1991 Audi Coupe - which is better for you? Find out with Edmunds' head-to-head car comparison tool. Compare prices, options, features and specs, expert and consumer reviews and more.

Overall nice (lots of BMW lines borrowed). Everything in front of the front tires is terrible though (and the rims too, again). lamps, grill, ruin it, especially the melted looking fascia below the grill.

I love how emotional the new sonata is. The first time I saw it driving down the road in real life I was stunned, in a good way. Love that new Kia too. It’s sort of the opposite in design direction from the sonata, but both are great examples of each kind of design philosophy.

The rear 3/4 view of that sonata coupe is really nice. Generic, but nice. A little bit A5, a little bit BM. But thats a huge step up for Hyundai

The biggest issue with it proportionally is that the door seems short, a lot of room between the rear wheel and the door, kind of like the old sebring coupe.

Since studying form language and brand with cars, I tend to judge how successfully auto designs usually try and infer the logo of the company into the overall composition of the car design. I think Kia has good success with their newer lines because the brand mark looks much better than the parent Hyudai logo. Maybe it’s just me…but it helps to try and justify a design decision whether successful or not.

For my two cents, I used to work on hyudai’s as a tech, and I hated them passionately. We never used to pull the cars into the shop unless it was the very last one left in the lot. I guess lately, they’ve been better since I’ve been out of the game for quite some time now. As far the design goes, I always assumed, and from what I’ve heard, Hyudai has always been a “me too” brand. They’ve never really spun off innovation into the designs, just always picking up a cues and throwing it in.

Actually Yo, on closer inspection, you’re right, the short door would definitely make entry/egress to the rear difficult

It’s interesting, but just moving that one line back a few inches would increase the visual length making the car look lower and more taunt… I’m sure there was a functional need to put the B Pillar in that spot, possibly having to do with the vehicle being originally engineered as a sedan only.

Note that Hyundai plans a coupe version of the Sonata, but that this rendering was done by a none-designer PS tweaker. The production version will look different.

Well. What do we think of the Hybrid version?

Evidently, they designed the whole system in house so they don’t have to pay any licensing fees like Ford does with their hybrid products. (Toyota may have to as well, though I’m not sure)

Also, they’ve dropped a V6 option from the Sonata next year and replaced it with a Turbo 4. Which is pretty awesome if you ask me. I loved my Turbo 4 Audi which was smaller, but probably just as heavy.

I think, from a styling standpoint, it’s a step back. The hybrid looks very tacked on versus the normal Sonata.

BTW, Ford licensed the Toyota system. I’m not sure if they still due though.

Well. What do we think of the Hybrid version? .

oh blerg! You blew it guys.

Still wouldnt buy one from either company. Their cars always remind you someone elses first. Borrowing (stealing) so much elements from others is annoying. They are lacking brand identity.

I think they have been keeping their feet on two strategies. (One decided by Marketing & other by Design) Whenever some great design or style is introduced by some other company & they start capturing the market. Hyundai sees the opportunity. (Most of the time) restyles existing design to the market’s need. Otherwise, they have a strong design philosophy with bionic style.

I really dig the interior. It looks like some kind of South Korean video game bar. The exterior looks very Fiesta, but I think that’s a coincident. 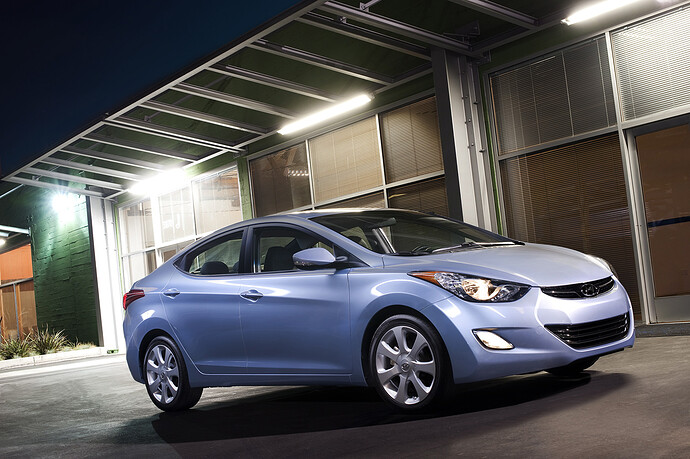 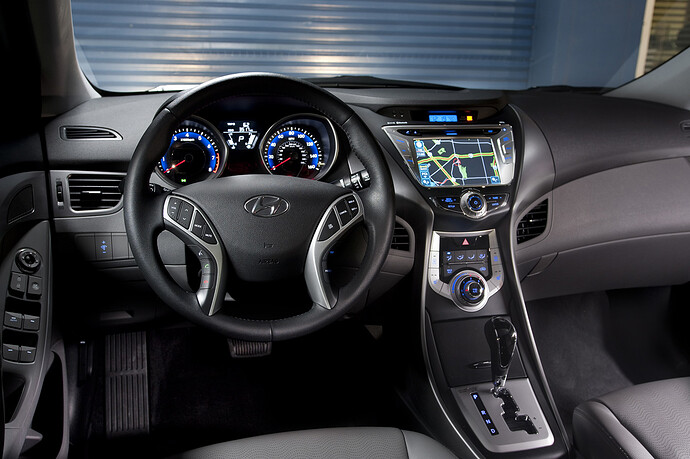 They must’ve designed that interior on Alienware computers. Couldn’t even leave the gauges circle…

engio: That’s what’s interesting about it. It is not a safe design!