First off, the Equus. 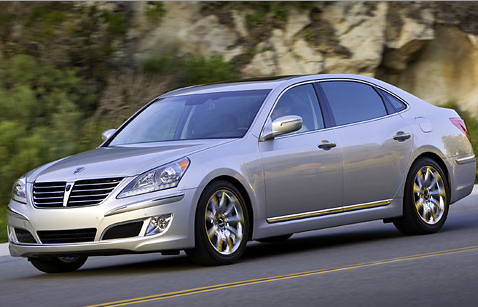 Supposed competitor to Merc S-class, Lexus LS, etc. for of course thousands less. They’re taking a larger step in differentiation from the others by nearly removing the showroom from the buying experience (for better or worse), as well as service. Then they announce that they are including an iPad as the owner’s manual for the car and that you will also be able to schedule service, etc. from it rather than going to the dealer.

Personally, I like the design of the Equus and it’s smaller brother the Genesis. They’ve taken some great things from other sedans and plopped them into an affordable package. 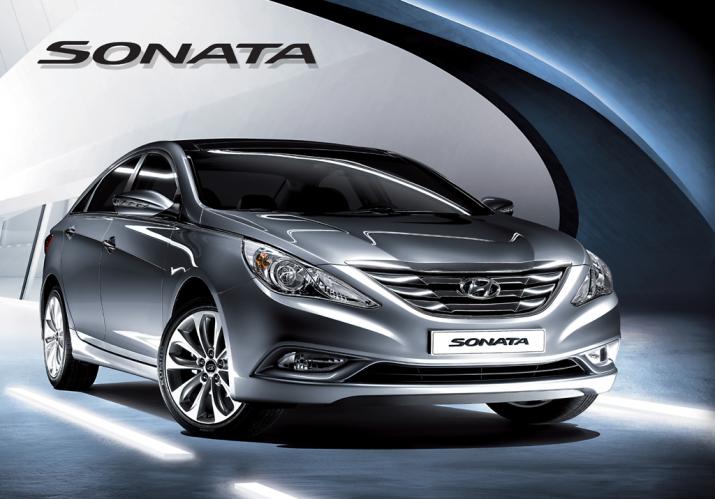 In the past few years, Hyundai has been all over the map in terms of design language (both in advertising and car design), so I should have expected this. But, with the recent successes they’ve had with the previous Sonata and Genesis sedan and coupe, including they’re ambitious plans for the Equus, I really thought they might be going some where.

I feel the opposite actually. The Equos is a hodgepodge of random “luxury” ques from other brands. I’d be embarassed to drive such a poser mobile personally. I think it has a market, and this is what Lexus did with the original 400, so it is a path to establishing a beach head in the lux market. They will need to brand it though. The Avalon never took as a lux car, they had to add Lexus.

I think the new Sonata looks pretty good in person. Robert Cumberford does an interesting analysis in this month’s Automobile magazine. The grill is at leaste original. It almost looks like a trilobite. I think it is the start of something. The package is very much current camry meets an a6 roofline, but probably good for the market they are going for. It is long and sleek looking.

Yeah, I agree with Yo, the Equus looks off. The front end is really busy and confused. I really liked the Genesis sedan, granted almost every element on that car was borrowed from another model, but at least they assembled the stolen parts correctly. This looks a little too shotgun. The Bentley like hood ornament I’ve seen on it in other pictures is just foolish looking. Aren’t there laws against those now for pedestrian safety? 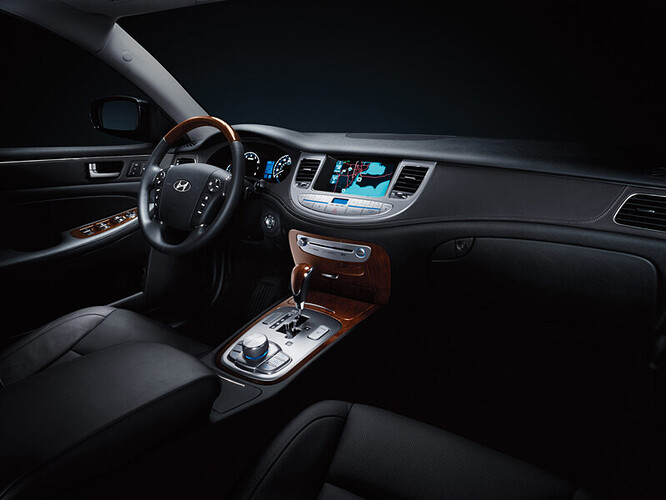 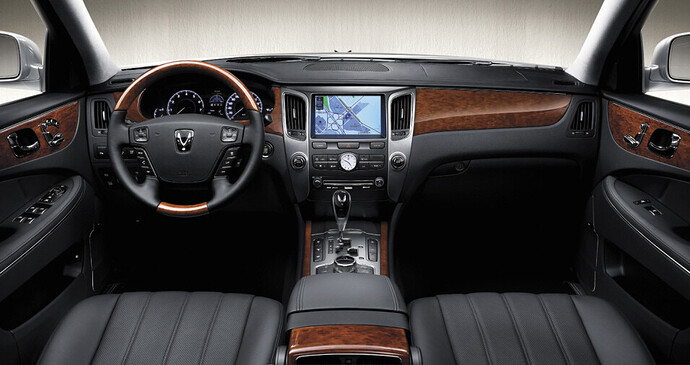 Likewise, the Sonata interior is pretty nice, nice sculpting on the steering wheel, and the way the trim on the center stack fans out onto the IP into the central HVAC vents is a neat idea. It’s a little much, especially those sharp creases over the center stack, but it’s not bland. Overall, this seems like a pretty good amount of design for a 20k sedan. Toyota watch out.

There’s just something about the hood that bothers me. I think it’s where it meets the fenders… I see your point on the grille, and I do like that. I really like the interior of the Sonata, always have on this model, it just seems like the stepped too far from the previous gen.

I see your point with the Equus, as well. And maybe it’s the familiarity that makes me like it. I’m not saying its better looking than a 5 series, but they’ve got something. Although I just read a NYT bit about it, and they likened it to the VW Phaeton. A car that is out of place for the company it belongs to. Toyota can do it in the US because they introduced the Lexus brand as their premium model. Even though the 400 and 430 were both Toyota models in Japan.

I’ll have to check Automobile this month… Love Cumberford’s take on things.

It is a little weird how the the side surface of the A-Pillar rolls into the hood and then flattens out toward the grille. I’m not saying it’s a beauty, or an icon, but I think it will do very well for them. It is a pretty legitimate Accord Camry competitor, and they couldn’t have leapt in at a better time.

It is a pretty legitimate Accord Camry competitor, and they couldn’t have leapt in at a better time.

I’ll agree that i didnt like the sonata in pictures but on the road it does look kinda nice.

So, I saw the new Sonata in person yesterday in passing… Very nice. As usual, I should have reserved judgment for seeing one in real life. Very nicely proportioned, and has a great presence on the road. Well done.

I still say the Equus isn’t a sharp looking car, not the best, but it’s not horrible IMO.

As usual, I should have reserved judgment for seeing one in real life…

I do the same thing all the time… I never learn. And based on pics, I’d probably have derided it as well. On of the bean counters happen to get one here so I had been seeing it in the parking lot for a few weeks. It had to be the first one off the lot.

I think I wanted to blast the new Sonata on the boards when I first saw pics. Now, I’m floored. This is the first Hyundai that I think jumps to the top of the pile for me. It is clearly inspired by the Merc CLS and Volks Passat CC, but I think the Hyundai looks better than either of them. The proportions are absolutely perfect in person. I love the details in the headlights and tailights. The thin strip of chrome running up the side to the back doors looks so classy.

In terms of desire, I think this blows Accord, Camry, Fusion, Malibu clear out of the water.

I don’t know, I saw a black Malibu, with black rims, and blacked out tail lamps a few months ago… pretty good. They should do a factory option like that. The Sonata definitely has a lot of CLS and CC influence, calling it better would be a stretch though.

On of the bean counters happen to get one here so I had been seeing it in the parking lot for a few weeks. It had to be the first one off the lot.

someone at work here has one too, or at least i saw it for the first time in the parking lot yesterday, have to see if it still show up, wonder if its one of our bean counters as well?

what would that mean?

On of the bean counters happen to get one here so I had been seeing it in the parking lot for a few weeks. It had to be the first one off the lot.

someone at work here has one too, or at least i saw it for the first time in the parking lot yesterday, have to see if it still show up, wonder if its one of our bean counters as well?

what would that mean?

Bean counters typically know a good value when they see it!

I’d love to hear comments on this beauty. Designed in Frankfurt and California by Kia’s studio, revealed at the NYC show. 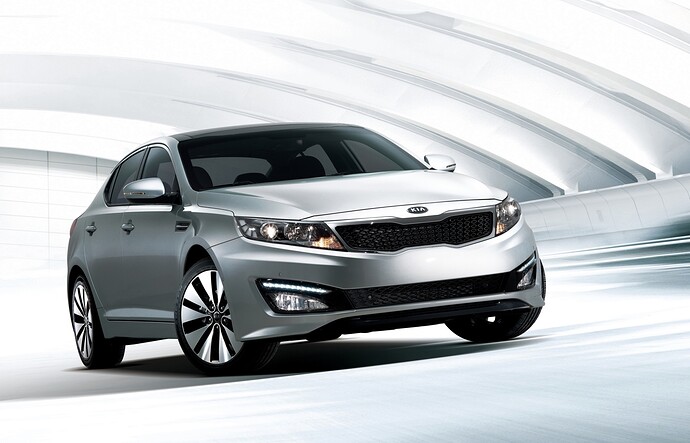 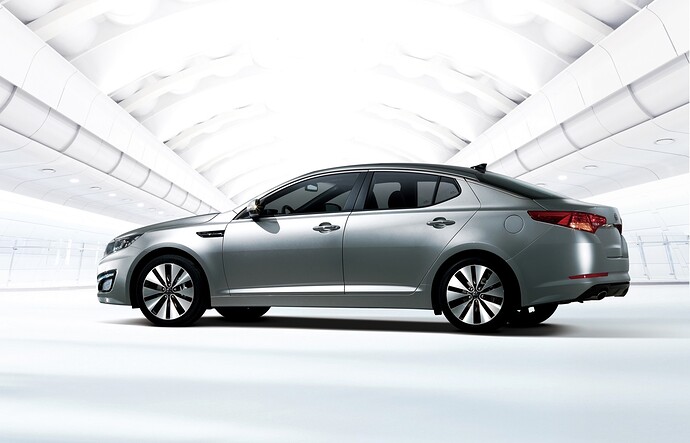 If I only looked at the side view, I’d guess that it might be a new Acura.

I saw a stat somewhere that Kia’s sales in the last 5 years or so increased something like 1200%, while other companies lost sales… This certainly won’t make things worse for them.

I reserve judgment until I see it (for once) but from the photos it looks very good. As said, very Acura, the cleaner, more machined Acura of 5 years ago that I personally loved before they went with this whole “Decepticons” design language they have going on now. I’ll have to dig it up, but I believe Kia recruited a well respected European automotive designer to be their global head of design, and Hyundai has been stacking their design team as well. One of my classmates who was a year ahead of me (who also designed the Chrysler Crossfire concept car) is at their California studio. I believe he worked on the Genesis coupe and several of their concept vehicles.

Don’t know how you came up with Decepticons…

Peter Schreyer: head of Kia design since 2006. Previously worked for Audi/VW since 1980ish. Notably, head designer on Yo!'s TT and the New Beetle.

I do like the side profile on that kia.
The front grille/headlights look a little too much like the forte for me, i know its a design language, but i think it looks ok on the forte, which is more entry level/sporty/junior, but i feel like its a little juvenile looking on this car?
Like yo said ill have to see it in person, and the whole price/value info would also determine how much i like it.