Working on a new logo for my First Pullover footwear design resource blog for an upcoming revamp.

The design uses similar typographic elements/typefaces as my other identities (personal logo and The Directive Collective design consultancy), and is designed to have a “process” feel to the construction of the letterforms, with almost a sketch like quality. 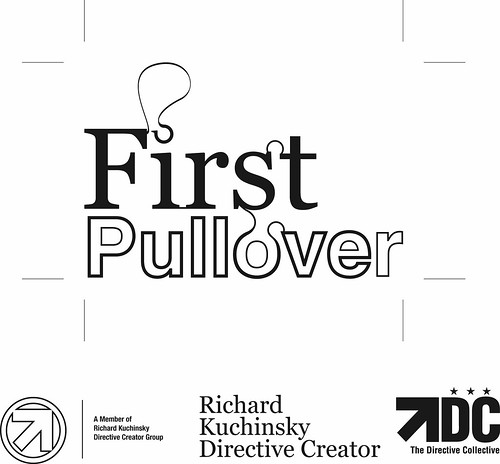 me likey. Though I was surprised with serif font…

The only thing I can’t get past is the “fish-hook” dot over the eye.

Otherwise, I’m pickin up what you’re puttin down.

the serif font to lend a bit of classicalism to the identity. Along the lines of traditional information resources like encyclopedias, etc. As you can see it is also what im using in my personal identity which was going for a more “corporate” type of look.

good point about the “fishhook” “Fi” ligature. I hadn’t seen it that way, but now that you mention it, i think ill give it a go in revision. I was going for more of a sketch line/shoelace look and the dot on the “i” i considered more like a shoe eyelet. Perhaps may revise to have the stoke going through the hole which might be more indicative of the intent.

thanks for the comments. keep em coming.

I think the loop from the initial F may be a bit much though.

You could actually get away with having just the upper S connect to the lower O, and that alone would do it. But, that’s really cutting it back.

In my opinion, if you were to ditch the F loop, you’d have the two accents right above/below each other, and would be a little bit more “contained” in the rectangular space that you logo occupies. Not the rectangle with the crop marks, but the visual rectangle that it occupies, starting at the top left corner of the F and ending at the bottom right of R.

The only thing I can’t get past is the “fish-hook” dot over the eye.

I think the loop from the initial F may be a bit much though.

and would be a little bit more “contained” in the rectangular space that you logo occupies. Not the rectangle with the crop marks, but the visual rectangle that it occupies

My thoughts exactly. I think that if you get rid of (or greatly reduce) the outward jutting f-i ligature you’ll have a more successful and usable mark at your disposal.

I think that the original post was a bit hard to read (visually) Your other logos were overpowering and I initially thought all of them were a part of the mark you were asking for feedback on. If you want to keep them as reference for critiquing the First Pullover logo you might want to increase the whitespace between the crop marks and the additional logos.

Enough critique from me…overall a very cool direction. It speaks, in a visually unique manner, to the craftsmanship of the shoe industry.

I’m liking the the logo rkuchinsky, I think it fits right in with your overall branding.

One thing, that was bothering me though was the line weight used in “pullover”. It looks like the “r” is a lighter line weight than the other letters. Sort of looks like you were trying to emphasize the “pullove” and not the “r”. Also I was wondering what it might look like if the line weight for the areas inside your “p”, “o” and “e” were bumped up a bit?

Great logo though, and great blog, I just got done reading through it!
-Choto

thanks for the additional comments. my thoughts-

as an example, here a recent revision of the first page of my CV with the logos at the bottom tying into the overall type look of my name logo and layout. (btw, ill be changing my avatar, the old pink RK/Directive Creator logo will be placed by either the arrow/circle logo or just the new type treatment.

overall, the goal is a bit of refinement and a more cohesive branding approach. 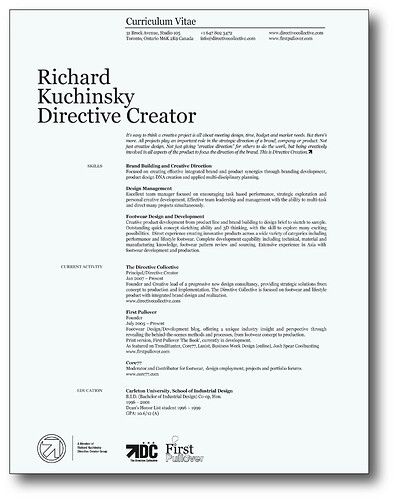 i see where you’re going it’s pretty rad, i have a few problems though.

i think the placement of curvy lines coming out of the letters is working, but the lines themselves bother me. you’ve got a thin weight line coming off the corners of a varied weight serif, which at it’s thinnest point is thicker than the curvy lines. perhaps you could either make the actually morph from the serif, if not, i would suggest repositiong them. for ex: the “O” works nicely but it gets lost when it connects to the “V” it makes perfect circle, i wish it was more of an arch that ended up coming down smoothley witht the V. the same thing happens from the S to the T. i think it would also flow a little better if the line coing of the F came from the top of the serif and the line from the S came from the outside of the serif, rather than the inside. also, this may not be a design problem but the R in Pullover has a thinner line weight.

i’m not getting the “process” feel, i’m feeling more “mechanical.” i would tinker a bit more, i also wouldn’t shy away from drawing it, hand drawn serif fonts can look very cool depending on how small you’ll eventually be getting with it.

overall good concept, but i suggest working on the “kinks” literally.

i just read what i wrote and it think it’s hard to understand, plus there are some typos. let me know if i can better explain anything.

I’ve removed the “fish-hook” dot over the eye and connecting stroke from the “F”. Instead, (after playing around with several variations), i’ve gone with a more natural “fi” ligature using a lower case “f”, with some tweaks. Most subtle of these, but with some nice added meaning, is replacing the “i” with a numeral “1”, which of course goes back to the “first” name.

I’ve still got some fine tuning (ie. kerning, alignment of the top and bottom words, some fiddley serif stuff, etc.), but think the result so far is cleaner in concept and exectution while still working with the other logotypes in the family.

Is the line weight of the r at the end of Pull Over supposed to be a different?

Is the line weight of the r at the end of Pull Over supposed to be a different?

the line weight in the "holes: of the P, o, and the whole r are thinner than the rest of the word and i think it creates a disconnect in the word. almost an eye-sore. i guess for me that makes it feel disjuncted.

it’s not your eyes, the lineweight is lighter on the "r’ of pullover and in the center of the sans serif letterforms. as mentioned earlier, it is on purpose to add an “unfinished/in-process” look to the wordmark going back to the idea of a first pullover (first footwear prototype).

The reason behind it is clear. but from a visual eye point it does not work,…for me.

I have tried to change it keeping some of the intended feeling.
For me using 2 fonds and one “old” and one not is giving it more a Old into new feel.
and not a “work in progress” feel. So in the last I have used a handwritten forn to give the “from-drawing-to-production” feel.

Hope it will help you.

I feel the logo would be more successful if the sweeping lines were a little more organic. I think this would portray laces a little better. I loved the original “o” in pullover as well, maybe there is a way to incorporate that. I think the idea of the unfinished is interesting and tells a story of the site. I would play around with the way the word fades out. Is it like an old printer, half way drawn(just the top)? Or is it more of a tonal fade towards the end? There are an infinite number of ways to say unfinished. I hope what I said makes some sort of sense to you. Keep it up man, I always use your site as a reference.

thanks for having a go at it, but i dont think your attempts keep the feel of what im going for. also, if you re-read my original posts, you’ll see the selection of the typefaces links with other logos in my family of brands, which is important to keep. the look overall is more refined and business-like than what you’ve got which i feel looks more hair-salon or techno website.

anyhow, i appreciate all the comments, and also the different perspectives from people.

for some addtional reference, here are a few other logos i’d but in the same frame for reference- (with my logo at the top for comparison).

still to do for sure:

to see the logo somewhat more in context, i’ve just revised my personal CV site, where you can see it with the other logos in the brand family.

also, just happen to come across the latest Wallpaper* mag design issue, and noticed they also are now using a very similar serif/sans mix with similar ligatures! below. 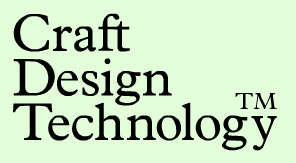 No problem. Just did it in a way I would tweak it. Doing/showing it instead of writing it down. I think “the arrow in the circle” and the “arrowDC” logos are very good and strong. At this moment the “first pullover” logo is missing that strength.
In that sense it does not belong in the family jet.


The “ST” in “Best” has a nice flow in it. would be intresting to see what that does in your “First”.

Hmmm. Been looking at this on and off for a while. I think you are trying to do too many “clever” things with the logo which leaves the brain lost as to which one is important and what the tie-in is. There is no focus. I feel like 2 fonts with loops in both, a “1” tying into the F, then multiple line weights within one of the fonts is just too many directions. It’s like trying to solve a puzzle that’s too hard to solve so you give up. lol. I would pick your 2 favorite plays and go hard on that.

What do the ligatures represent again?

This is just my very humble opinion and I am not trained or well versed in logo/fontmaking by ANY means. Just my thoughts.

Logo is okay… but to me personally it doesn’t not convey the message, almost looks like something you would see for a fishing clothing line with hooks everywhere…

Simplify it a little more

the transition between first and pullover I do like but you need to keep the consistencies between the font as well as a consistency with line weight.

I like how you did incorporate the 1 instead of the i in first, thinking outside of the box, thats good.

Try different variations with different fonts, often if i feel stuck I will try and and end up liking a mistake better than the logo I started out with… I say experiment a little more and try something different to define you and your brand…

None of this was intended to offend you just my 2 cents, take it as constructive criticism if you choose so… only here to help