As a follow-up (keeping the threads separate to keep things OT) to my recent topic of “Whatever happened to…” I’d like to start a discussion of those brands that are in the reverse position. That is, brands that have embraced design to re-invent themselves.

I’m looking for brands that have used design to move to a new position to become current or future design leaders, not necessarily new brands that use design well. Change of course, as it is.

HP??? Whether they have been successful or not I’ll let you decide?

Microsoft saved some face with the Window’s Phone 7 UI, Arc mouse, and Zune HD.
In other areas though…yuck.

Is Ford coming back? I’ve seen some okay things (like in the Fiesta).

I know it’s only one object, but if TDK keeps up the design that was on their Three Speaker Boombox + Two speaker + One speaker… they’ll be a strong contender. Those things are NICE.

I partially agree with Samsung, only because I hate their cell phones… so plasticky. Also their TouchWiz Android skin is total balls.

In any particular market, as technology matures and spreads, a company’s once technological advantage becomes merely me too. In all these examples, these 2nd tier companies are in technologically saturated segments, meaning they have now acquired the majority of the foundational technology that their 1st tier competitors have (consumer electronics, cars, shoes).

How do you differentiate your product once the “technology” playing field is leveled?

I agree on microsoft. They have produced some noteworthy designs, and feels a lot fresher than just a few years ago.

I’d like to suggest DELL. Similar to MS they have also been releasing some eyecatching stuff. Mostly concepts though, but i think they are handing in some good work. I guess their next step is to actually bring them to market. 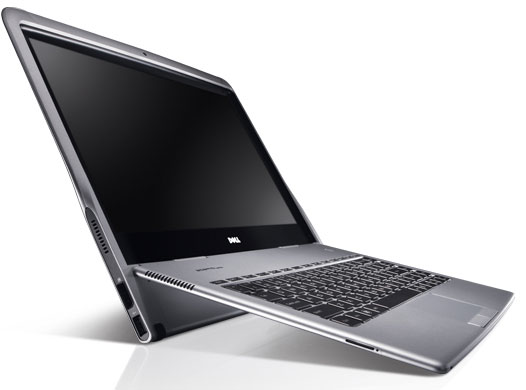 Maybe I should clarify, the OP. I’m not just looking for examples of companies that are putting out some good design here and there (there are lots of examples of that), but rather companies that have taken a leadership position to embrace design from the top down to completely re-fresh the entire brand/product line.

In that respect, I don’t know if I would include HP/MS/Dell. Some of what they do is good, but do you really see them as champions of design in the way that Sony or Braun once was?

How to brainstorm on this…hmmm? Let’s think of various markets and see if any emerging design leaders come to mind.

Done some recent work with Polaroid and I can say that they are very actively pursuing design and creativity as a cornerstone of their brand. They’ve had a turbulent past few years so it will be interesting to see the payoff what with Lady Gaga getting involved.

They displayed quite a directional shift this year for CES 2011 and released some interesting products that integrate with social media.

I’m curious what others’ here think of their direction and new product design.

I would say Hyundai is making a good run. They went from being a joke to a pretty decent company in the past few years. I know they are not at the level of Toyota yet, but their overall direction is going up. 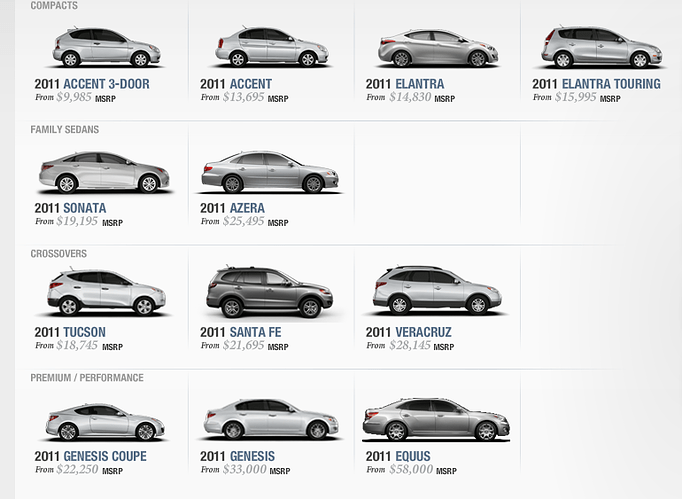 I would say Hyundai is making a good run. They went from being a joke to a pretty decent company in the past few years. I know they are not at the level of Toyota yet, but their overall direction is going up.

I’d agree. Not sure which model it is, maybe Genesis sedan, but there is one that the rear view keeps on catching my eye and makes me think it’s a Lexus/BMW, in a good way. Genesis coupe is also pretty nice, except for the melty look from grill/lights.

I would agree with Samsung.

I would say Ford. Love the Fusion, Fiesta, Edge, Explorer, etc. Just solid design without 80 surface transitions going on, but still richer that their more stoic / conservative stuff of the last decade that while generally inoffensive, was usually uninspiring.

Ford and HP. HP is really under-rated. They do solid design in everything and have for the last 6-8 years. Dell does great concepts that I never see in the real world. Where do they go?

Facebook, while not three dimensional, belongs on the list. They could have been another boring Friendster, but through careful iteration, Facebook has turned itself from social networking flavor of the month into an unstoppable (for now) juggernaut. I can’t even imagine the value of the data they own as a result.

Also, totally agree on Ford. The Fusion, current Mustang, F Series Sport, Fiesta - all strong, world class stuff - Taurus is a bit odd, but still bold for what it is. Even sleepy old Lincoln is starting to show signs of life as they gradually transition the product line from the geriatric to something that at least shows the influence of some of the killer deco/lux/Sentinel concepts of the past decade.

I’m going to add Amazon to the mix. The Kindle plus amazon.com (basically their iTunes), makes for a great device/service pairing and steps things up, plus the Amazon site is always getting stronger and stronger.

Seems like Levi’s woke up again recently. Always liked the 501 and 517, but they’ve made a strong effort to appeal to more fashion conscious customers by offering more high end product, such as selvage, a vast array of contemporary washes, and reissuing classic versions of their signature products.

Surprisingly, Wal Mart has made more of an effort to make its stores feel less like the soul sucking pits of despair they used to be. More approachable logos, slightly wider aisles, more attention to how merch is on the shelf, the use of wood in their grocery aisles…not perfect but a vast improvement in retail experience (in newer stores anyway).

It all comes back to the people.

Dell: Ed Boyd took the job of VP of design there a few years ago after a sizable stint at Nike

Microsoft: Ray Riley is Design Studio GM after years running one of the advanced design groups at Nike, prior to that he was at Apple

Ford: J Mays is back at the helm after focusing on the “Premier Auto Group” which was Volvo, Jaguar, Land Rover and Lincoln. Now that they sold 3 of those 4 brands and axed Mercury, you can see his influence on the new “Post-Kinetic” design language of the Focus, Fiesta, and Fusion and his stewardship of the Mustang. He also hire Freeman Thomas, whom he worked with at VW & Audi. In between Freeman was heading up Chrysler’s Pacifica studios and his influence I think can be felt on the last 300.

Hyundai: they have been hiring design talent from all over the industry.

Kia: Peter Schreyer heading up design, formerly from Audi during the turn around years of the late 90’s early 2000’s

HTC: purchase of the Bay Area firm One & Co to design hardware

Of course the leadership level in design is not the full story, but hiring these big salaries (or buying an entire firm outright in HTC’s case) is evidence that those at the top get it, and hopefully they get it enough to support and collaborate with design through all phases of development and go to market.

Im going to throw Cadillac into the mix. I know that they have not changed recently, but I think the start of the ‘Art and Science’ design language was really a game changer. They went from a pretty typical American car company (Im sure you all forgot about the 82 Cimmaron) to a spectacular spread of vehicles that are taking awards left and right based on the new design language. It was nice to see a company bucking the trend of updating vehicles from the 60’s.

That has to deal more with style and trends for young adults. Young men use to rebel by rocking a leather jacket rather then a blazer. But now young men are more incline to dress in a clean modern cut suite. It all comes in cycles.

That has to deal more with style and trends for young adults. Young men use to rebel by rocking a leather jacket rather then a blazer. But now young men are more incline to dress in a clean modern cut suite. It all comes in cycles.

Not really, the frumpy ‘old man’ stuff they still do, but the product that makes the headlines and has made these brands hip again is very different indeed - I’m thinking Burberry Prorsum, the catwalk line, designed by Christopher Bailey. One of the key items in fashion this winter was the Burberry Aviator jacket, million miles away from the trench that they were originally known for and got so much coverage in the fashion press.

You could even add Jimmy Choo - he was a small time London shoe maker, well known in the eighties but not particularly hip, sold his name to Tamara Mellon, who has turned it into multi million pound business.

Lots of good brands mentioned. As far as individual designers go I can not think of many who have had a more profound impact in the last few years than Michael DiTullo. I’ve seen his book turn up at every design school I have been to in the past few years and the work he did at Nike seems to have inspired many.