Is it just me? Am I just being an old curmudgeon?

I have always gone with,

I don’t see it with the new UI.

The home image of a dartboard without a bulls-eye is appropriate. I’ll give them that.

I read all my main Core77 content through Feedly either way. So the change doesn’t really affect me to much. Does seem “fresher” though

the new layout has angered me!

Initial reaction is that whilst image and layout wise it’s visually more appealing for the individual elements, as a whole and for navigation I think this is a step backwards. Maybe I need to give it more time.

But I even think they carried the left to right thing a bit far.

In the Discussion section, 2 columns, multiple rows. I want to read up to down on the columns, probably because the line for every row has a break in it. If they didn’t break the line, maybe I would read the rows over the columns. btw, chronological order is by row, that’s my complaint.

Was the other layout broken?

I also find it confusing. I don’t know why the articles are broken up and it makes it really hard to see what’s the new content. I usually don’t come to core77 looking for questionnaires over galleries, I just want to see what’s fresh.

With that said, it does look good.

I’m not 100% sure the Squarespace-esque theme really works for a blog/news website. Great for a website selling a product that encourages you to scroll down for new info but not so sure it works here. Might just be a case of having to adapt to change though.

One thing that had been happening to me was I couldn’t log in to the forum through the usual top right. This happened: 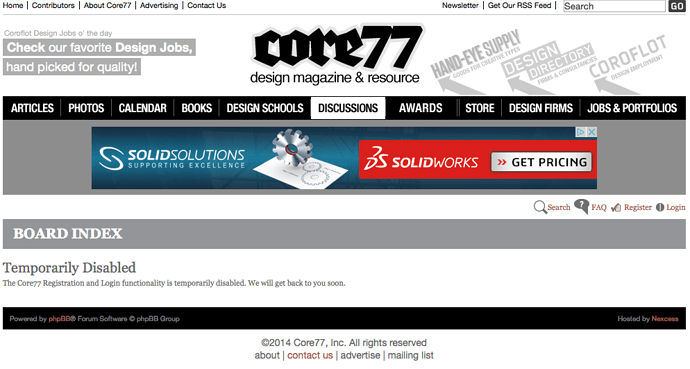 I liked how the old UI had articles stacked in chronological order and showed a “preview” of sorts. That way I could easily pick and mix the articles that grabbed my attention and navigate through sections I may have missed. I really find this hard with the new UI.

I agree that perhaps it is more visually interesting, but it lacks the functionality of a good product…

My main issue is that the name of the designer responsible is one of the most prominent items in the header, below the giant ad at the top of the page, in the middle of a large splash image showing darts missing the bullseye. Stuart’s name links directly to his profile which gives a face to a name, now I cannot publicly express my opinion about the main page unless I know he can take, or is interested in, the critique. I am sure he and others worked hard on it.

However, I find it not good for the task of communicating the Core77 site.

This is what I see. 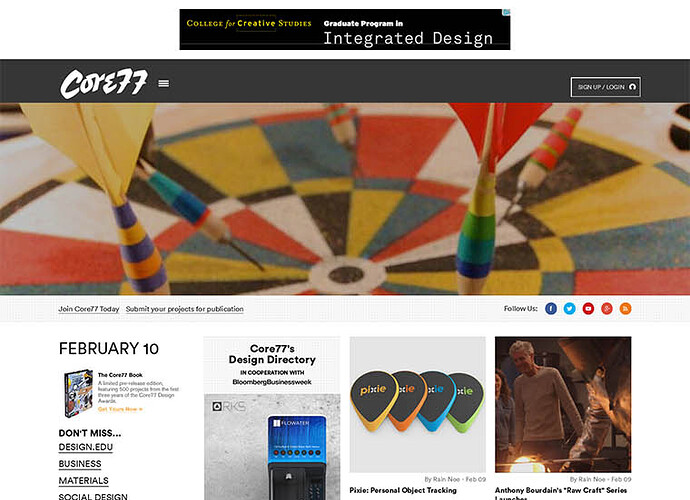 It has become a site that one visits maybe once/month. Instead of a site one visits several times a day whenever losing focus. For me core77 has been the latter. But if they rather be the former, I guess the design works well.

The redesign reminds of Brand New . They too went from the blog-like design to a grid of pictures. I visit it maybe once/month, and I get a get a great overview what has happened since last time (only clicking 2 or 3 most interesting posts). But it’s no longer a site I frequent every day. I suppose this design would work better for a site that makes 50+ posts each day, like a newspaper. But for those like core with 5-10 posts… nah.

Oh well, at least external links open in new tabs unlike the boards

On the front page I don’t understand why the header is (or needs to be ) so large. It seems to be taking a lot of real estate away from actual content. The same is true when reading articles. I would prefer the images for stories on the main page to be larger as it makes it easier to scan and decide on if I want to read the article (opened in a new tab). As a daily user (I think that counts as the first step) it’s important or me that stories are clearly chronologically ordered so that I can easily see where today’s content is rather than hunt around for it (something I wouldn’t bother to do). The layout on an iPhone works well, but when reading a site for information I use a desktop and there seem to be some alignment issues (images in story and is ‘galleries’ supposed to fit into the same space as a story rather than have it’s own row?) It’s okay but a bit too busy for me. Would reducing it to two (or one as on iPhone) story image per row make it clearer? 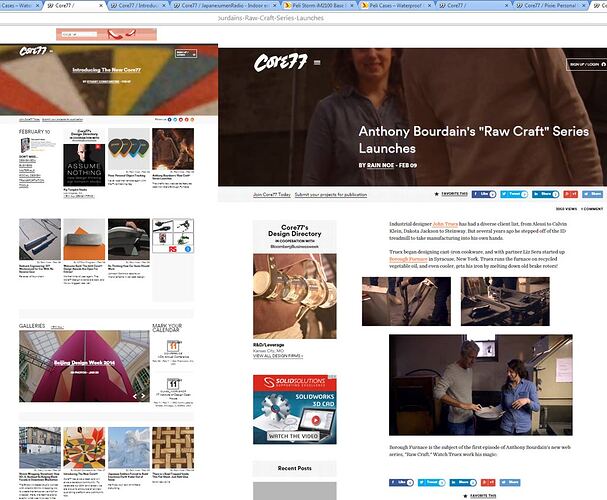 I don’t know who mentioned feedly, but I don’t think I visit any blogs daily since these new design trends came in. Now, I read news through old reader (previously Google Reader). I think any layout other than chronological leads to that behaviour.

However, I have been told by a few different sites and read that these new layouts increase click-throughs. The internet doesn’t come free…

However, I have been told by a few different sites and read that these new layouts increase click-throughs. The internet doesn’t come free…

Certainly the previous version of Core let you read most of the story and decide if you wanted to know more. That certainly led to less ad exposures than just teasing a sentence like the current version. Hopefully they will not adopt this bit of modernity that is all the rage:

“A well known French designer built an AK47 of of solid gold, what he did next will surprise you…”
“This German designer took a single piece of wood and turned it into a tray you could never imagine…”
or “Japanese soldiers forced to build a giant Darth Vader out of snow…”
or “Watch This Surprising Way to Quickly Quarter a Sheet of Glass”
or “There is a Bowl Trapped Inside This Flat Sheet. Just Add Glue”

… oh crap it has already happened. Link bait wrapped core 2.0 with tiny thumbnails that you cannot make out what the actual story is until you generate another page click.

I can’t see how this new structure will involve the readers more. It looks like all nice modern “do away with your time”
websites look. The discussion boards and coroflot are relegated to the backseats.

I like it. I guess I’m the only one. Initially I thought it was “another damned thing that I had to relearn to use”, but I find it scales nicely with adjusting width of the browser (I’m not always maxed and sometimes use a wide screen turned sideways as a second monitor). The side-to-side format is only there for wide displays. Shrink the browser and the format turns vertical and linear. I like it even if it is borrowing from other design sites.

The mobile site is much improved as well. Time will tell if the functionality is as improved, but I already find it easier to see older data…

The header is a headline, not a glorified homage to the designer

Since the new format is probably the most important recent development on Core77, they give it a prominent spot on the page.

Im also not a fan of the redesign for the same reasons as everyone else. Though, if i were to point out one area of concern, i am a bit confused in the logic behind the layout of the different sections. Why is there random bits of discussion boards, galleries, and stuff littered in between the news contents? Makes readability and browseability fairly difficult imo.

… In the end, everyone will eventually get used to the new layout, as we all have experienced with FB updates but just because people learn to get used to it, it doesnt always mean the experience is good.

They changed the Forum Layout.

So I just wrote a long rant but then discovered that the new login/sign on system didn’t like my old user name or password so it got erased.

Why is the banner of people socializing ~500 pixels of my screen? Are you honestly telling me 50% of my screen needs to be filled with that picture for every page I click? Also why does it show me “join the discussion” after I’ve already logged in?

Cmon guys just because every person who picked up the same bootstrap template made giant images cool doesn’t mean it’s usable or appropriate. If I have to scroll down every time I want to see more than 1 line of text it’s going to get very old very fast.

I assume this is still a work in progress, because the current mixture of serif and san serif fonts is like a bad design joke.