Honda has shown a ‘concept’ version of next years Civic coupe. Worthy of a look, even though it isn’t very ground breaking. 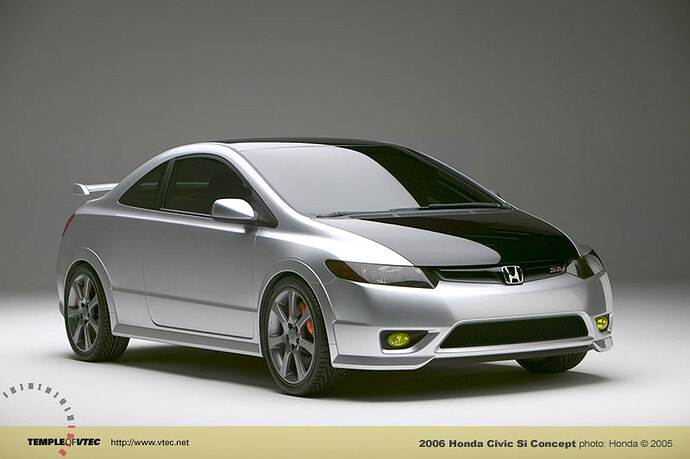 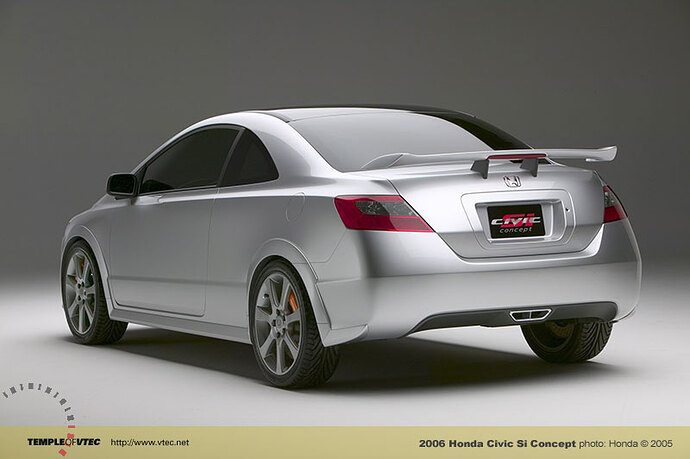 Has a similar feel to the Accord coupe. Although it has a stronger beltline.

If the images above don’t work (I’ve had problems with vtec.net links before) go to this URL:

nice proportions, clean design. Not groundbreaking, but a real nice step from the current design. Looks like there where some proportional learningd from the Acura RSX.

In the vtec.net fan forums alot of people were moaning, “oh it’s so Scion!”. To close to the competition?

I dunno, I’d say the scion TC looked very Honda-like, but with better proportions then Honda had at the time. Certainly neither of them breaks any new ground. 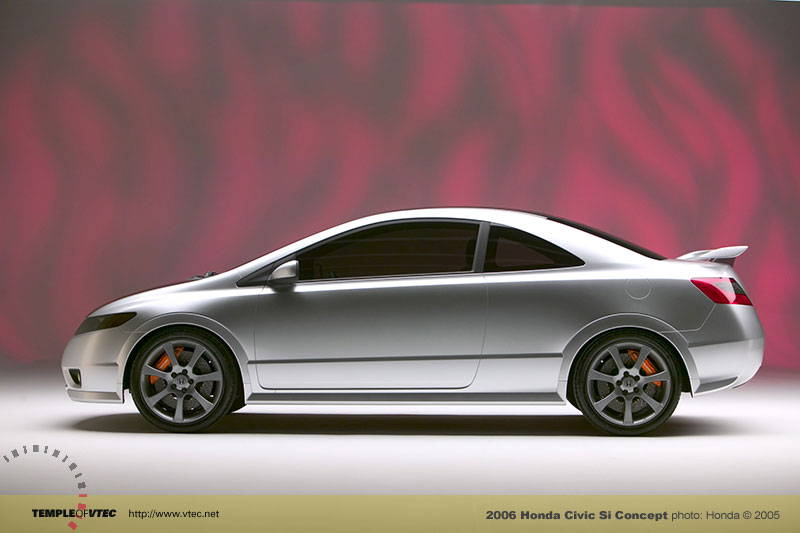 I personally like the tC better than this civic.

I’ve never liked the civic coupe’s proportion, especially from the c-pillar to the trunk. It reminds me of the peugeot 206 convertible, with a heavy head and a light tail.

The facade is nice and I like how the headlights flow into the intakes. However the headlights gives a somwhat retro style, reminds me of the old school calculator black screens with green digits beaming through from the other side.

The tC has a more volumetric proportion. I bet it’s got more interior room as well. The only think I don’t like about it is how thick it looks. They need to lighten up the look of the bumpers and side skirts. Maybe an aftermarket part will help.

IMO the tC has the facad of the R34 skyline, which looks like a volvo too.

I wanted to point out that official images of the 2006 Civic five door (Europe & Japan only) are available at:

The whole aesthetic is incredible to me. Very different from anything out there today. Bad part is they use a torsion beam rear suspension (like Golf IV), but that’s typical in Euro cars (Renault Megane also uses torsion beam, even in the sporty models).

What does everyone else think?

The headlights in the concept version have a very mean-japanese-guy look, and remind me of the L-Finesse language. If that’s intended to be a stock carbon-fiber hood I think the boy racers will be beating down the door to get one.

The 4-door has a lot going on for such a small car. Are people really supposed to get in and out of those rear doors? And visibility looks poor, rearward, with that big C-pillar and slanting waistline. Too much plasticky spoilers and wheel wells too. I won’t say anything else.

The Golf/GTI-mk.V looks sorta like a previous year’s (Gen 6?) model Civic, totally going away from the slab-sided VW/Audi look aside from the monstrous grille. First Drive: Golf V GTI - Wolfsburg to Paris

Slippyfish: the coupe and hatch are for two distinct markets, and in fact, are two very different cars that share a name and an engine.

The coupe is US and Japan only. It’s a much simpler design. Very clean and straight forward. The only real gimmicks are the wing and hood. I doubt the hood will make it to production, the wing will be an option. It’s very typical of an American design management decision: stick with what sells (ie conservative).

The hatch is Europe only. It has a less sophisticated twist beam rear axle (ie cheap). The look here is everything. Honda sells only a few more cars than Ferrari in Europe, so they want to get noticed. Big sellers in Europe the last 10 years have been Focus (wild design) and Renault (wild designs toned down a little). Honda wants to follow them.

Probably the ergonomics have been sacraficed in terms of rear access and visibility, but see my first point.

It looks like a minivan. Well actually it looks like they wanted to offer the buyers 2 choices of a minivan, regular and coupe, the coupe being the minivan with a roof that makes it look more sporty, as if they removed the van’s station wagon roof and replaced it with a fastback roof to make it look look lower and sleeker. Judging by the sales of similar vehicles, that thing will sell very well.

I hope that the redesigned Jazz will be more exciting than the Civic. We’ll see…

Actually A-line, the rear looks alot like the new redesign of the Accord sedan’s rear.

Actually, I was thinking it looks a bit like the old CL, which to be honest I never liked at all.

The CL trunk is similar. The new Accord, Civic and Maxima all have the trunk recessed below the surface of the taillights and bumper, the CL’s is flush with the lights.

I liked the old CL. It looked kind of like a weird insect with that pinched rear end.

The original CL concept car was pretty hot: I don’t have a year on it, but it was the mid 90’s I think 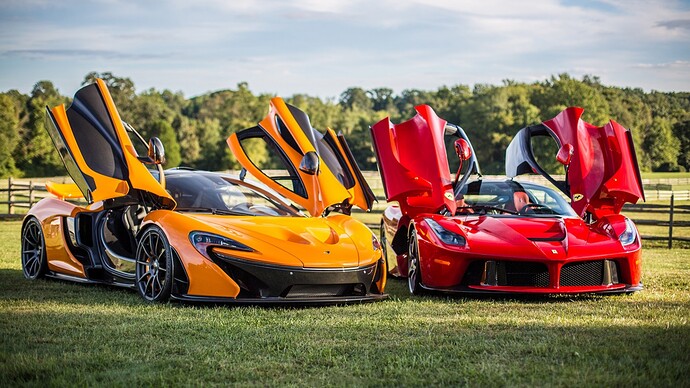 An awesome collection of epic supercar pictures and galleries. Enjoy the beauty, aggression and outright strinking nature of the best cars on the planet.