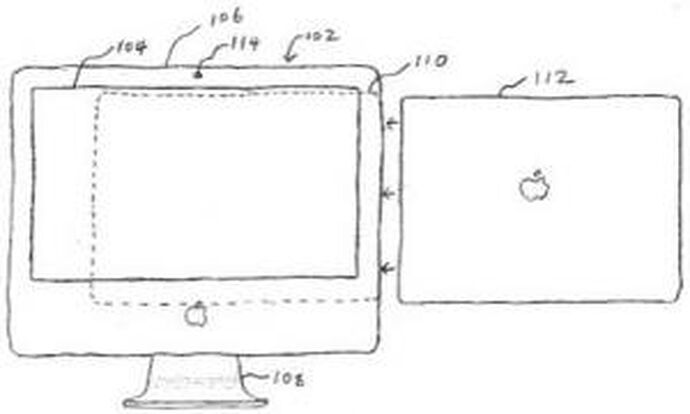 A patent application submitted in 2006 and published for the first time today has revealed that Apple is working on a docking station for portable...

I don’t understand how the dock will work when the MacBook 13", MacBook Pro 15", and MacBook Pro 17" have different dimensions.

Let me see if I understand. The user will slide their laptop into this docking station to use it as a desktop? I like the idea.

As for the patent…I can’t believe how bad the drawings are!

They are bad… but do you think they were done that way on purpose? You can’t really see much of the details, just the basic principle. This would be an effective way to hide the real information from websites like macsecret and still get the patent in the works.

Typically most patent submission drawings are bad, at least the majority I’ve seen so far.

All of the Apple patents I’ve seen were all drawn this way. But look at their products, there really isn’t much more to them that would need to be drawn by hand, details are probably finessed in 3-d and with prototypes. I doubt they have a wall full of hand drawn iphone refinements that are pretty much just changes on corner radii. They do what’s necessary to get to the next level and I think that’s an important lesson for the younger designers. I bet you’ll see a lot more drawings like this from inhouse corporate settings where the goal is to get to the final product efficiently as opposed to the perfect perspective flashy hand rendering that you’ll find at consultancies who’s purpose is to impress an outside client so that hopefully they get to the next phase of the project. The corporate positions I’ve had were similar and drawings were nothing more than these, just enough to let the other designers know what you’re doing and get the information across, no psd renderings, nothing fancy. I can’t imagine that any flashy drawings are done while conceptualizing their products, probably thumbs like these then quick to 3-d, models, and material samples along side the interactive design.

Artist’s impression of what it would look like, found here

Genius. Much nicer than the nasty, hard to use dock I hide under my desk.
This is a great way for Apple to sell more displays.

As for how they’d pull of compatability, just look at how they solve the problem with iPods: snap-in adapters.

if you read close, or maybe just other gadget blogs, this patent-concept is designed for an alleged new ultraportable macbook. So, no dice for us who already own macbooks.

I’m sure the sketch looks like that on purpose. All of my company’s patents have simple, not very good-looking pictures to accompany. You want it to be as general as possible to protect yourself.

if you read close, or maybe just other gadget blogs, this patent-concept is designed for an alleged new ultraportable macbook…

I’m reading that as “iPhone”… makes sense. Mac can’t get enough people to buy their computers, but oodles of folks buy iPods and line up for iPhones… so, the next iPhone plugs into a monitor/doc to be your entire computer… bam.

Apple, if that is not what you are planning, I’ll sell you the idea complete with patent sketch

I’m sure the sketch looks like that on purpose. All of my company’s patents have simple, not very good-looking pictures to accompany. You want it to be as general as possible to protect yourself.

Sure you want it to be as general as possible, but come on, use a ruler!

I fought with our patent guy for two months over how my dotted lines looked on the last patent drawing I did. Albeit, it was a design patent, not an utility one.

Yo: That’s a great idea. I’m sure Apple thought of it too.

if you read close, or maybe just other gadget blogs, this patent-concept is designed for an alleged new ultraportable macbook. So, no dice for us who already own macbooks.

Which gadget blog did you find this information about the ultra portable MacBook?

This new ultra portable MackBook makes sense for this concept due to the current placement of the CD/DVD drive on the MacBook Pro, which is in the front, unlike the MacBook, which is on the side. Inserting or ejecting CDs or DVDs into or out of a MacBook Pro would be a problem if the CD/DVD drive were still placed on the front while it was docked in this new monitor.

Apple is making it a pain to keep up with all this planned obsolescence.

it was either Gizmodo or Engadget

the idea wasnt from apple, but i think there is something interesting there. obviously there would be some ducplication of screens and otehr bits, but the thinking that you just “build up” a computer to your needs is interesting. Stacking Russian Dolls sorta thing.

In fact it’s just ye olde docking station, but without the need for an extra large desk.

My desk is currently occupied by a bulky 21" CRT monitor, a keyboard, a printer, an external harddrive, a mouse, a CD-rack. Having a hardtime placing my laptop somewhere in between