This thing looks straight from the Syd Mead sketch book:

This oddball vertical airship is designed to stay in the air for a whopping two weeks without landing. It's powered by a crew of 2-4 people pedaling, presumably in an ironic nod to The Flintstones.

I just hope its not another hindenburg disaster

the design almost looks the same. 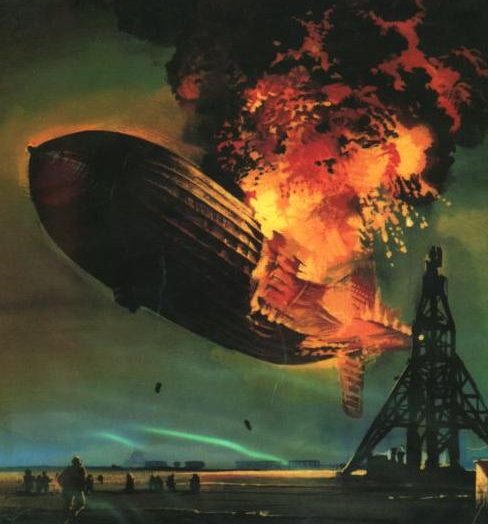 I was referring to the silver outer shell.

That is a really fun form, and I agree it looks like it came straight from a sketchbook (in a good way).

I think it looks cool.


The Hindenburg disaster could have been avoided by following a cardinal rule to airship piloting, “if there is lightning, get out of there ASAP!” Also the shellac coating did not help.

With that tall somewhat elliptical plan form (Spitfire like) it should move through the air with the greatest of ease, but I wonder how it fares in a crosswind?

Helium lift gas eliminates the Hindenburg syndrome, but it will be sometime before we see it crossing the Atlantic … being human powered.

A note: Everyone seems to be using the same images … wonder why there aren’t more photos available?

Nice drawing and nice shape.
Shaped insect like…Dragonfly with wings in the “Up” in flying mode.

the body looks like a grasshopper. reminds me of this project i had to do in school. take an insect, build a wireframe model and the through that derive a product. lots of fun

This don’t make sense to me skin area is weight, circle provides the most volume for unit of surface area so that’s why most are that shape. Some have been proposed that are “wing” shape to gain dynamic lift, that makes sense too. The proposed one seems to be the worst of all, lots of skin for the volume, and no dynamic lift.

Zippy: I thought the same thing. Also, wouldn’t this design be influenced by the wind more than a cigar shape? It seems so.

Zippy: I thought the same thing. Also, wouldn’t this design be influenced by the wind more than a cigar shape? It seems so.

sailboats, ice boats, windsurfers, all come to mind…of course they all have a keel or a dagger board to convert some of that to forward motion…this seem to be lacking that.