Can anyone help me on this drawing, I would like to make this ‘robot’ come to life. Make the lighting more dynamic etc. Can someone tell me how i should do that, or show me, by copying the image and editing it. Any other advice? 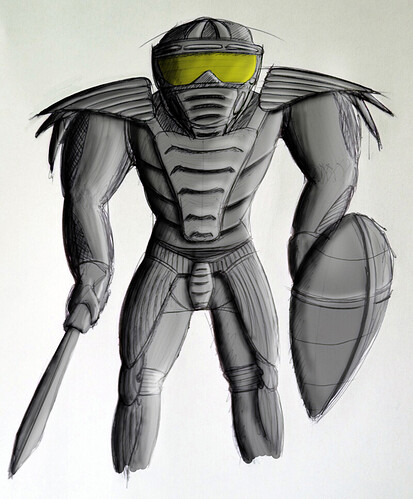 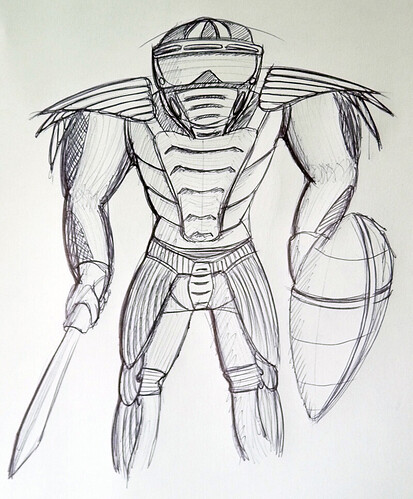 Tried to put some more detail in the head here.

You learn a lot by looking how other people draw :

Don’t forget to focus on getting the sketch right first. You sketch could come a long way before you start rendering. In the time you fuss with rendering this one sketch, you could do 20-30 overlays getting the shape, proportion, level of detail, stance, and linework much better.

Thanks for the reply Yo. I made a couple of overlay sketches and changed some details. Is this a good base to start rendering from? 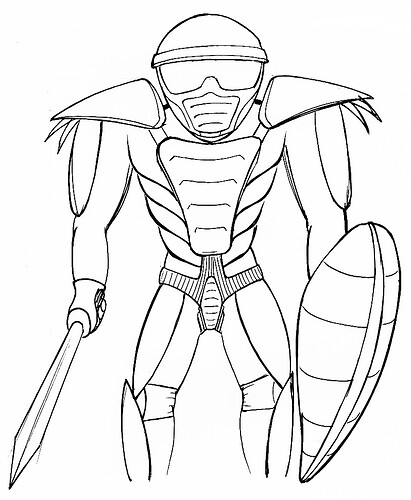 The pose itself isnt that exciting so that will make it slightly trickier.

Your shape\ design also isn’t that exciting, and lacking in detail, espcially the massive shoulder area. How do all of those areas and garments flex on him, how does he use his helmet etc… they are the details you need to put in.

But as Yo says work on your lineworks, composition, details form right first. Serioulsy some black and white linework can look kick ass. Blasters stuff is a great example of it.

Pop over the the concept art forums and have a look at the sketch books over there and see and analyse how they bring stuff to life.

Keep at it, dont frget draw constantly in order to get better.

I didn’t put a lot of detail in it because i want to make this one a clean rendering. Something stealthish. I started rendering this thing and this is the result so far. I personally think this one is a bit nicer than the first one allready 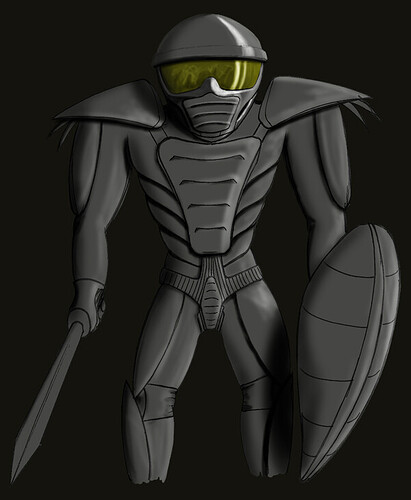 “Stealth” things still have detail. Think of a stealth bomber, or any of the lambo’s yes its all anglular surfaces but there still are details, fixings fastnings where panels meet. Especially items like your sheild and sword, they are hard to beleive because they

A clean rendering is just a rendering style i.e tight, and i wouldn’t let that dictate anything about your character design.

You aksed how to make this robot come to life, it will come to life when it one can perceive it as being real. I.e Details

The point being work on linework and quality of design first, rather than rendering.

This guy looks, stealth ish like sam fisher and check out all the detailing on him.

Those renderings are really great, but i dont really want the stickers on the shields on stuff. I do like the little buttons an small details a lot. I’ll try to add them to my rendering.

Yeah i wouldn’t get hung up about the way it looks more the design of that guy.

Your charachters proportion arent really correct, i,e he has a tiny tiny waist and massive shoulders.

Maybe do some figure studies if this is what you want to get into.

I spent about 20mins on these sketches to sort of show you what i meant by detail. Adding crevisis and in my case tubes ( no idea why i just went with them) makes it look slightly more beleivable, also when you take it into 3D it also looks more impressive rather than 2D. I have never drawn any character type things before so they might not be of any help to you but thought i’d pop em up.

good start, props for putting your work up here and asking for advice. I would advise you to hold off on the rendering and practice drawing. Take this sketch and “trace” it repeatedly, improving each time. Figure drawing is hard, I avoid it whenever possible

. Find images to trace over and practice drawing people in different poses. Eventually your mind/arm will “remember” and you’ll be able to draw accurate looking figures without even thinking about it.

Maybe, try drawing a side view of the guy to figure out some more of the details. Don’t fall into the trap of making this one sketch precious. As mentioned, one thing that makes it not come to life is it doesn’t look too realistic, wide shoulders, odd left wrist, etc.

Stick to pencil/pen but think about where the light is coming from. Then you can start to block out what parts of the character is dark and which is light. A strong contrast will create a more interesting/exciting image.

I’m no expert, but you could also experiment with a more dynamic pose, I did a quick overlay of your sketch: 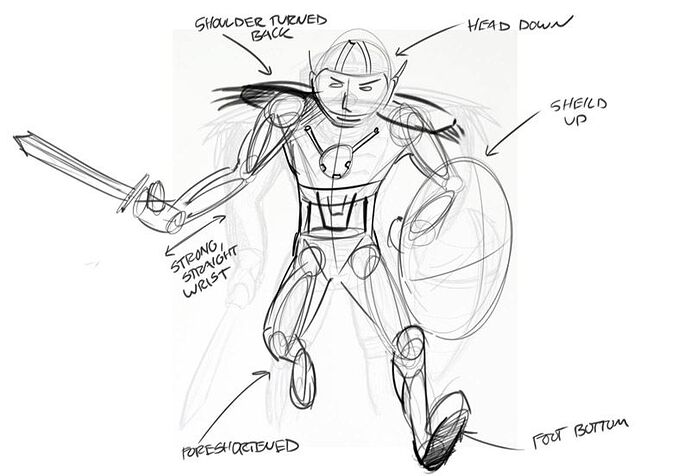 Ok, so i started sketching some this little guy in different positions. Then i chose the position i liked the most. After that i made like 15 overlays of that sketch till i liked the result. Is the level of this final sketch good enough to start rendering or not? 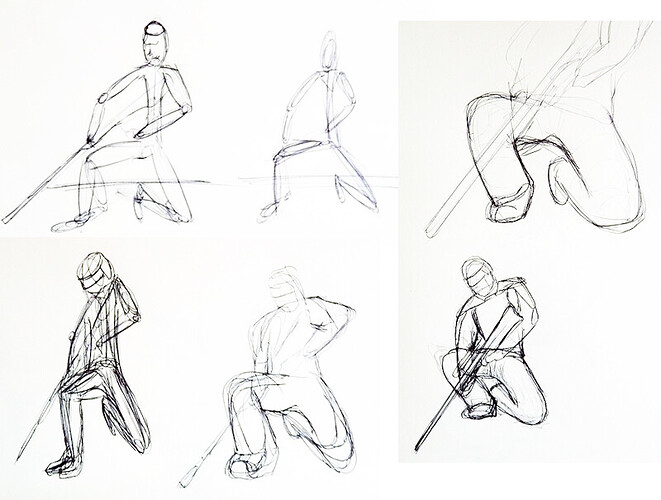 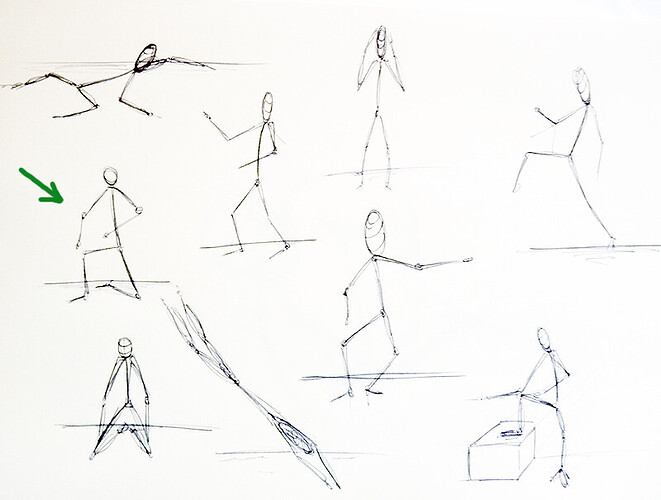 I personally would say no. It is however your decision. Again massive amounts of detail lacking, for your final linework the perspective still isn’t right, picky i know. I think your questions would be better answered over at the Concept Art forums www.conceptart.org/forums. Your talking about illustrative figure drawings and renderings and beyond responses of not enough detail line weight etc… i dont think your going to get much else.

Kudos for putting it up though and keep at it.

Here is an example taken from the CA forums

This guy has only just started on rendering and he is that level of linework he is at just as a comparison.

I tried rendering his head, pretty happy with the result, but you’re right about the linework and perspective and the detail. I think i’m gonna focus on the basic linedrawings now for a couple of weeks, to take my skills to the next level. Your comments really opened my eys, Sketchme, thank you.

I tried rendering his head, pretty happy with the result, but you’re right about the linework and perspective and the detail. I think i’m gonna focus on the basic linedrawings now for a couple of weeks, to take my skills to the next level. Your comments really opened my eys, Sketchme, thank you.

Those renderings are really great, but i dont really want the stickers on the shields on stuff. I do like the little buttons an small details a lot. I’ll try to add them to my rendering.

It’s not about the stickers, its about the proportions and stance. Keep sketching, stay away fro the rendering for a bit.

“How to draw Comics the Marvel Way”

“The Art of Star Wars” Episode V and VI are good.

1, There are no creases or irregularities in the clothing

2, Shadow is the only thing providing depth to the render

3, With the first picture it is head on, you hardly ever see pictures like that head on because they are so difficult to get right.

But I’m no expert and those are far better than I would manage so just keep trying, and like some other people said try copying someone else’s picture to work out how they managed and you can use the techniques that work for you in your picture.

Carmenelera : If you attend 30 second session on this site…
your sketching …figure…posture drawing will definitely improve…

Thanks for those links! It’s a really great exercise indeed!