My version of the iPAD 22 YEARS AGO!

Here’s my version of the “iPAD” 22 years ago. I submitted this computer tablet concept to UNISYS Design Competition in 1988

and won honorable mention: Docking station with a tablet and digital pen/scanner.

I guess I should’ve applied to Apple instead of Digital Equipment Corporation back then (DEC was bought out by COMPAQ - remember them?)

Now, I’ve applied to Apple for a Trademark Counsel position. I hope I’m not too late to the party! 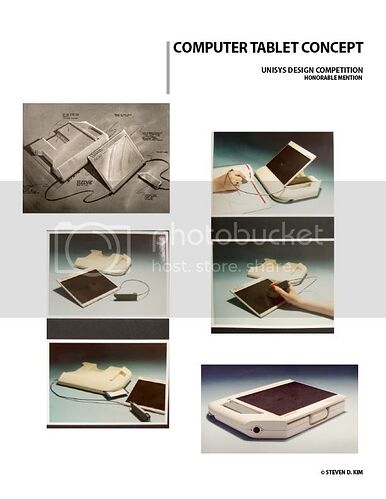 I like the floppy drive integration. Eat that Ipad!

I like the floppy drive integration. Eat that Ipad!

No kidding! At least you were forward thinking enough to ditch the 5-1/4" floppy.

Is that a chalk and charcoal rendering by the way? Or just BW photo?

That’s marker, white chalk (grated) and pencil on canson paper - one of my favorite ways to render.