My sketching style is a bit too 'cartoony' for my taste.

Attached are a few examples of recent sketches and renderings of mine, I am having a bit of a plateau in realism with my renderings.

A bit of toying around I was doing today:

I would love to get a couple of pointers, if there is anything that seems to be jumping out or that I am missing. Thanks!

I personally dig this style because it is different and I understand the gist of what is shown. I think a lot of people first learn to copy another designer they like, but then do not depart and develop their own unique way of communicating visually. Not that there is anything wrong with that, but I find it odd when I see multiple designers sketches and I cannot tell whether it was done by more than one person.

The bottom render gives off more of an actual fine arts feel merged with designer. However, I can see where you might believe that this style does not benefit communication from designer to client/engineer/etc. First off, I think there should be more descriptions of the mechanisms within your sketches other than just “fix to not be separate”. And make sure your typography is neat and straight (I feel like something about this was discussed in some other topic) Also, maybe if I were a CMF person, the bottom render might be a little too flat to communicate exactly what types of materials you would like this knife/blade tool to be made of unless that is meant to be uncertain at this point, but emphasizing the mechanical bits first. So far I just assume a metal or reinforced plastic. Although that may be a separate drawing for spec sheet type stuff they require. I am sure there are far more useful ideas/critiques from the experienced community so my opinions should probably be taken with a grain of salt.

Friendly sketching isn’t bad. It makes your ideas approachable, shows you are having fun being creative. Lots of my favorite (and most talented) sketchers have a pretty friendly, approachable style. People are scared of new ideas and designs, friendly sketches make them seem less risky.

If you want your sketches to be more serious, practice keeping straight lines straight instead of having a gentle curvature to them. This will make them harsher and bolder.

It also depends what you’re designing. You want to find a good balance between the nature of the design and your sketching style. Obviously if you were sketching to the Xbox One or PS4 brief, you’d want it a bid edgier and harsh.

I would add a 2nd level of line weight, a heaver weight that communicates when an edge is in front of something else behind it, or the outline of an object.

Typography for sure… Admittedly it is a weak point of mine. I don’t really have the best handwriting to begin with.

I’de like to be better at conveying materials, I do 99% of my coloring digitally these days.

I suppose I can embrace my friendly style more. Thanks!

The renderings are a bit hard to judge, mainly cause I looks like they are just sketched over photo’s/renderings and the transparency of the photos have been lowered. So it reads a bit more like an instruction/manual. So maybe thats contributing to the friendlier vibe.

If I look at your other sketches online. They don’t come off as cartoony as your other examples.

do you have some examples in mind of styles you would like to be closer too? Then maybe we could help with some recommendations of how to get closer?

do you have some examples in mind of styles you would like to be closer too? Then maybe we could help with some recommendations of how to get closer?

I’d be happy to show some examples. As of now, I have been aspiring to a styles of Black and Deckerin MD, Tom Murray (now of bresslergroup) and Brent Beukema (a Senior Designer), I really appreciate their use of broad sweeping strokes to capture the complex surfacing and surface features in their power tools. I’d like to be able recreate that ability.

One of the simplest ways I’ve had basic rendering described to me was as a three step process (note that this is a very condensed description of each, and that the rendering is of an extremely matte object with very little reflection):

First Pass (top left) - Light vs dark from a simple light source. Very basic blocking of the object’s base color and what is in shadow. 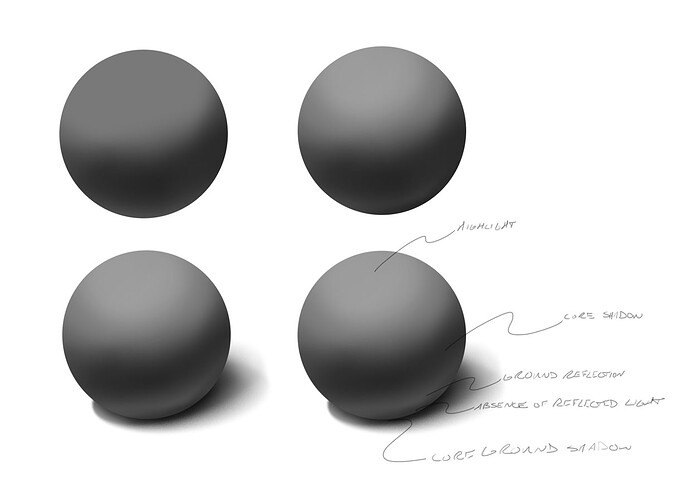 simple rendering.jpg1239×879 45.7 KB
In my experience the third pass is what begins to move your renderings away from looking “cartoonish” and toward something more realistic. Note that a “cartoonish” style is not a necessarily bad thing, depending on where you are in the process. I rarely do much of a third pass in my marker sketches because they are usually early round work that benefits from being looser and less refined. Hope this helps.
CarlTiki February 14, 2014, 8:04pm #9

Jeff, that is fantastic! Thank you very much, I have been neglecting the 3rd step entirely. I will work on that.

A little white backlighting can also do miracles to make a sketch fancier, but it depends on your style.

The Black&Decker references are great, thanks.

For your sketches, I would recommend playing more with line weight. Some lines can be expressed more strongly, you can even give them an overshoot. Also play more with dramatic shading, the environment is dark but there are hardly any dark values in your sketches. It will also look more like metal if you add some dark environment reflections. Or you could play with environment lighting to add warm-cold contrast to make the shape pop out better, or just add a colored light to shine on the edges to give it a more alive and less flat feel to it. Your sketches also contain a few flat surfaces which can make a sketch look dull - you could consider a slight gradient or environment reflection on such areas to spice up the sketch. Another trick that I use to make it look a bit more well-defined and perhaps less cartoony is to run a thin white line over the center of a shape, and perhaps some crosssections for complex shapes, so it becomes easier to read.

I have noticed a group of kids in my sketching classes having the same problem.

They seem to be too systematic with the treatments of the different elements of their sketch. That is to say, each piece of the sketch is treated individually with the same amount of attention.

There is the viewing level:

There is the sketch itself:
1.Perspective and silhouette.
2.Shading and line weight
3.Details

There are an infinite number of ways that you can apply this “levels” framework. Start paying attention to what draws you towards something, what keeps you looking at it and what makes you decide you like it. That kind of thinking you can apply not only to your sketches, but to your design work as a whole.

The important thing is to have a differentiation between the levels. Cartoons feel shallow because they tend to have less dimension. So find ways to ad more depth to what you are sketching. Draw attention to one part of your sketch and let the rest fade a bit while still being understandable.

I think the most important thing to remember is to develop frameworks, but, as one of the earlier posts suggested, find a balance between the way you sketch and what you are sketching!

I modified my current project to explore the advice described here.

I am pretty happy with the results. I had good luck with incorporating a harder brush edge. Also, paying more attention to the ‘personality’ of the material helped a great deal.

Nicely done! The hard brush edges definitely work well for objects like tools. Did you use Sketchbook Pro and make some custom brushes?

I agree with what ralphzoontjens said about the overshooting lines. For whatever reason, overshot lines feel more serious/industrial/constructed than stopping the lines short of each other. I think that the later does work great in certain forms that are more fluid and soft, as well as in toy and character design. Here is good example by Todd Herlitz, who has a lot of awesome toy sketches at http://tinyrobot.com/ :

It could help to construct the sketch a little more too. For example, where you have the horizontal slot with the tightening screw, you could draw it by fully drawing two ellipses and then drawing the lines between them, rather than drawing the contour of the slot.

I hope you don’t mind – I thought I would try your form in the same vein as the “Let the Overlays Begin” thread, with the goal of focusing on linework and getting less of a cartoony feel. Pretty much copying Zach Hastings’s style. I butchered the proportion and a lot of the subtlety of the design, and made the mistake of shading too much in that second sketch. I will echo what others have said in that your style communicates very well (more readable than my sketch) so maybe you should keep going with it! 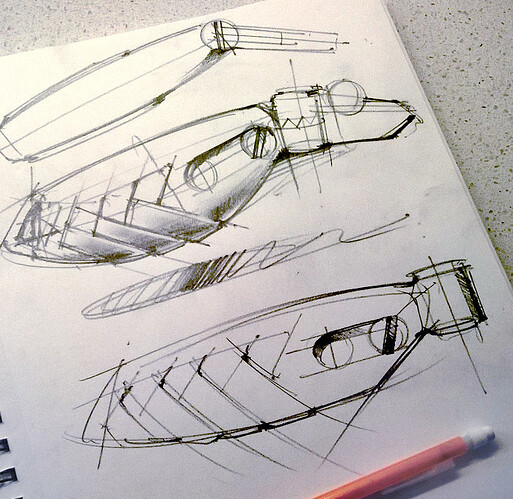 To update, I have been doing more of this product,

I am trying to smooth things out a bit, and leave the over shoot lines. I like this style!

I think the cartoony look is coming from an overall softness in the sketch. It seems like you’re using color and value to suggest the form whereas in your analog sketches the renders are tighter and the have a more solid look to them.
I think if you add construction/surface lines (like in your analog sketches) it can maybe help…same to consider for the colors/texture…i think the washed out colors and textures in the background along with the soft brushes being used are leaning the sketch to the cartoony side.

robby roys such a boss