The blog post inspired me to track a video down explaining the new Ford UI:

My opinion is that it is a mixed bag. Some neat features and some unnecessary driver distraction all in one. I love the way they control the volume and HVAC fan though. Pretty cool. Why didn’t anyone do this before?

I’d love to hear CG or Portigal chime in with their thoughts.

Oh man, where do I begin?

Modes! Modes are evil! Especially in a car where your attention to the road is critical. They obviously use modes (switching between Entertainment, Phone, Nav & Climate) in order to squeeze a lot of content into a small space. I see a lot of realestate on the dash of that car that could be better used to spread those four features out–so why didn’t they? Cost? Aesthetics?

The “mainstack” UI has a very high information density, which is multiplied by the depth of the UI. The font is insanely small and they’re not taking advantage of color or a grid system to organize and leverage the ‘recognition over recall’ principle. Buttons don’t look like buttons and are integrated with content. This is a double-negative since not only have you lost the physical affordance of a control, but the visual affordance as well. Look at the design of the radio app (1:10)! What the hell is going on?

The animation is really poorly executed (1:13)–everything slowly jitters into place, which is distracting, slow and gives it a lower quality feel.

The “touch sensitive slider bar” is a joke. There is absolutely no affordance or purpose for this control. Who would look at this piece of trim plastic and expect it to be a control? Why is this better than a physical slider or knob?

give me knobs and switches, I mean lets face it how many times do you adjust all that stuff. I love knobs, you dont have to look at them to use them, or hunt for them when you do need them.

Would it have killed them to put in a dummy user name for the YouTube demo? Welcome User Name N/A!

cg: You should be their spokesman!

I still like the slider. Once someone uses it (and cars are rarely bought without a salesman present), they won’t think of it again.

They all have the same problems. Imagine scooping up all the controls on your car and squeezing them into a 5x7" area, and then take away their tactile feel.

Why would you want to do this? What is the benefit? Is this just about saving money and providing a cheap and easy features platform? Or is there some real experiential value?

cg: I remember when the iDrive came out that BMW basically said they did it for marketing reasons. BMW’s target market was buying Blackberries or Razrs or whatever was in at the time. Computers and the net were popping up everywhere. The big tech bubble hadn’t burst (debuted in 2003, meaning work started in '98-'99). Therefore, why not take this UI from their desk and plop it in their car.

I think Ford is doing it for the same reason. They want to become the Apple of cars. They are starting to nail the design, now they want to nail the killer apps.

The animation is really poorly executed (1:13)–everything slowly jitters into place, which is distracting, slow and gives it a lower quality feel.

For what it’s worth, I think it might be in the video production and not the finished product. I noticed later when he was demonstrating the LED lighting options, they flickered a bit, which they wouldn’t do in real life.

However, I’m totally in your court as to why they need to do this. Two separate controllers and a touch pad and a non-descript plastic slider bar I’m supposed to just know how to use?

On another note, at the very least they could have gotten the Old Spice guy for this video. “Hello Ladies, Look at your dash, now look at mine, now back at yours, now back at mine. Do you want your dash to look like mine?.. I’m in a Ford”

I would expect to get a rather pleasant user experience out of this, as long as the car
is new and everything works as intended.

The touch sensitive slider bar is neat and the control of the main functions through
buttons on the steering wheel should work well.

The most important feature for me, is that it is an open system. You can get your
navigation data in and out of that car. I waited for that for 10 years !

I read a comparison review of the new Volvo V60 v. BMW and Merc. Something the review mentioned, was that Volvo hasn’t adopted an iDrive type UI, which all the Germans have to some extent. In fact, the author criticized Volvo for this, saying that they “threw buttons” at the problem of interface. Is it just me, or does the Volvo actually look easiest to use at a glance?

The crit might be valid if Volvo is attempting to split-the-difference between a touchscreen UI and a physical UI. In that scenario, it would be tough to know where to find a control. I’ve called this phenomenon “touchscreen blindness” because people won’t look beyond the touchscreen for a control, even if it’s directly adjacent. They’ll just assume it’s buried in a menu they haven’t found yet, and they don’t want to take away their attention or risk losing their place.

PS: Check out that door handle detail on the Volvo–sweet!

What I would like to see done more with touchscreens - gestures. 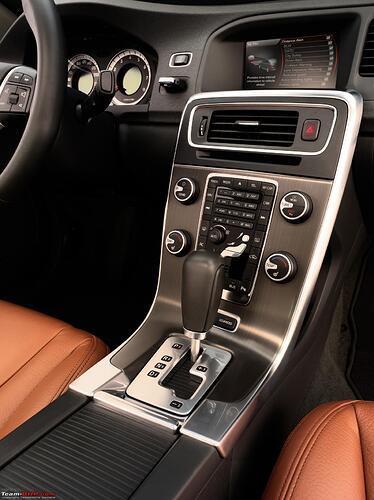 That centre console is neat. Can’t help but hate the key fob and separate start stop button. Can’t they just make the fob operate like a push key. aka. VWs. Taking two motions to start the car is ridiculous.

Seems to not be going so well:

Ford dealers to hold lessons on new MyFord Touch technology:
“Consumer Reports earlier this month said the new touch-screen system was so complicated and distracting that it would not recommend the Ford Edge or the Lincoln MKX, in which the system has debuted last fall.”

Think IDEO will keep it in their portfolio?!?

Seems to not be going so well:

Ford dealers to hold lessons on new MyFord Touch technology:
“Consumer Reports earlier this month said the new touch-screen system was so complicated and distracting that it would not recommend the Ford parts Edge or the Lincoln MKX, in which the system has debuted last fall.”

Think IDEO will keep it in their portfolio?!?

Well that was to be expected. Like what everyone else said that such modes are evil, especially that your attention to the road is critical right. Even a GPS is hard to look at when driving.