WE’ll the message boards in this section of the forum havent been moving much…so i am gonna pop a question.

what is your favorite shoe? whether it be because of how it functioned, how it looked, how cheap it was, hold old it came out…etc.

My favorite because of fit were the AI questions- I have like 5 pairs. they just feel great- I liked the DMX air system. I think AI’3’s had it-not positive tho, has been a long time but the DMX is lost in like a month or shorter time-tht sukked

for a designed shoe that i like .its hard there are really so many… but i like jordans XVII

I think with this shoe the whole jordan brand and well teh one before this, I think this is where teh jordan brand really got sleek with the design and it almost has a dress shoe ( dressed up look to them which i think was very original and classic.) look.

but my favorite jordans were the VIII, just the materials the “bunny ear” straps…the carprt on teh tounge–thts wht i grew up calling it. just everything about it the whole funky ness to the color its just great design.

I was always a fan of the way these looked. I loved the contrast between the vibrant green and the grays.

I was always a fan of the way these felt:

I was always a fan of the way these felt:

I’ve had other prestos (not woven, and other kinds of wovens) and they didn’t compare. There’s something about that particular weave/material that was far and away better than the rest of the experiments Nike produced…

I can’t pick a favorite based on looks. I really like a lot of the stuff that Medium and Diesel are doing with mixing sport and style.

MediumFootwear.com is for sale | HugeDomains

Since 2005, we have helped thousands of people get the perfect domain name.

my most comfortable are these:

They are an update to the Presto that only made it to Japan I think, called the Breeze. The upper is like a sock with some leather overlayed to keep you on the footbed. The tooling has a series of horizontal channels in it that compress while walking. Vertical channels open up the footbed and intersect the horizontal compression channels, drawing fresh ait inside every time you step, They are like the most comfortable summer shoe, and they are very sleek on the foot despite looking like a bag off the foot.

that medium site is nice. the black and white layout and how they labeled the shoes like “minimalist”.

I havent gotten a pair of prestos yet. if they could make a pair of pretos with the colors of the air max- that grey/drk grey with a touch of lime green, tht would be hot. the thing tht is cool about the air max’s is that they came out a while back, and now thwy are coming out again (they are out now) and they are still just as popular. i see alot of people wearing them in the city, NYC, when I first saw them yrs back i was like who would wear lime green…but now the more i see them i am like wow those really are great design…how is the fit??


come on YO…no favorite’s…maybe the one that inspired you to do footwear??

anyways yesterday i had my last basketball game of the season at the mens league at the YMCA, and i got a pair of shoes for the playoffs and i played in them lastnight the new T-Macs.

they fit really snug, and they actually tightened up, the only thing is that after you played you realized that the lever that you turn to tighten loosens up …so u have to tighten it a couple times. but they are cool i think, the contrast stitching adds to it and i like how the last gives it a nice toe shape. hey a bonus…no laces…i hate tieing laces…i end up just knotting them on the side and making it a slip on…much easier…

anyone check out the new adidas-with the battery or sole adjustment system?? I am not totally sure exactly what it does, was just told about it a while back and now just saw it. looks cool.

i wonder if this will last…or become like LA Gear- with the lights. technology mechanics in shoes…not sure if it has a lasting purpose. or just a one shot deal…what do people think…is this the future??

I like it though, great to see new things being tested. stretching the limitations

note- on the white version of the T MAC 4’s there isnt and contrast stitching but on the black ones there are. I purchased the black ones,it becomes a hassle to try to maintain and keep up a pair of white shoes…there are some exceptions…

Yeah, I’m just to close to it all to have a favorite. One of the guys that worked on the TMac is at Nike now…its a good portfolio piece to get in here eh?

…I will post this though. I was in 9th grade when this shoe came out, and I drew shoes ever since I saw it…

The VIII you picked is an awesome design as well, but I neve liked the cravy colored moldined parts, even back then.

youre telling me that youre happy with the state of sneaker design?
i would rather wear a pair of chuck taylor all stars ANY and EVERY day than 90% of the sneakers out there.

Why would i wear a pair of sneakers that lead you to believe you have shocks on the bottom of you feet?

ill have mine without the logo please

the Footscape is THE shoe. No question.

do a google search rookies.

who posted anything about being happy with the state of shoes now?? its a post of shoes that you like…u can add a topic od “shoes you hate”. but I am interested in seeing what people like and what they are interested in. there are always things to be fixed and worked on. How bout a post and lets see your pics of shoes…since the ones that are out now are so shity. The design in shoes is soo diverse and with so many brands doing different things. I think there is a shoe for everyone.

I will check out “THE shoe” how bout some posted pics…though.

those crazy colrs…are apart of the best thing…its like a painting on a shoe…should be in a museum. nothing like tht ever since.

i like yours…but kinda a watered down version looks to me, still very nice tho.

The Jordan XI’s were always a personal favorite, though I never owned a pair…originally released in 1995 and I think they did a retro re-issue in 2001…

You could almost see your reflection in those things…

Wish I had an image to post, but I’ve got no where to store it…

That shoe was a first for a few other things as well. The full length carbon fiber shank plate gave great ankle support and minimized ankle roll. The tooling really followed the calous paterns of the foot and kind of lead to that whole ergo line Adidas was rocking for awhile. Plus the leather was easy to keep clean, a must for a pair of AJ’s

still trying to get a pair of those-blk and red. they sold out in hrs in my city.

man, the xi’s are the dopest shoes every concieved!!! the JB line has always gone left of center, Tinker Hatfield was immortalized after that shoe among shoeheads. i mean patent leather just looks good, doesn’t crease easily, and most importantly as yo stated, is easily cleaned

hands down the xi is my favorite sneaker i still rock my concords, but since they were already mentioned i will give you all my runner-up which would be the mid-top AJ II, which were recently re-issued, i just love the look of them, i will post pics later.

digitalvision are the new tmac’s worth the msrp, or do you think i would be etter off waiting to the price drops? i really want these, but pockets are empty.

jmg, on one level i feel you because it seems as if sneakers has become unbelievable complicated but on the other hand i am excited about designing/wearing shoes that allow the user to maximize their performance, in fact i just finished this project for school on this battery powered sneaker i hope to post it to see what you all think.

well it depends i will give u whole write up on it later tonight gotta run pick up Girfriend ( IF I AM LATE I DIE) but they are hevier than i thought. the heel is a noticible weight gain.

just one of the shoes weighs as much about as my pair of running shox. I like the simplicity of the design …they are not selling in nyc tho. i havent seen one person wearing them…and at footlocker where i bought it they said they sold one…and tht wasn’t even from there store tehy just ordered a size from the store catilog. so they aint too popular. i think partly the weight and second…jordans rule nyc buying. and timbs. and well dunks…but really not adidas sport for men. The price also is a lil steep i think if they could have pulled it at around 100 it would sell. i have the blk pairs, and i thought those would have sold…but nah. they are very solid tho, i played ijn them and they have a lot od support in the arch of your foot, and also after you tighten it it fits very snug, but you might want to try on a half size larger then what you normally wear. they are kinda snug and don;t loos’n up much.its wierd i would wear them casually but not too much for playing a lil too heavy…could get used to it though…but why when there are so amny other porducts out there that are lighter. a good fit though. hot design. if u have the money save it they aren’t going anywhere…well atleast where i am…they will probbaly go on sale in late january…perfect for getting ready for summer / spring ball.

try’m on walk around teh store do some jumping jacks…do some 50 yrd dashes down the mall strip…test em…each foot i figure will adjust differently to it. i am not sure wht you are acustom too.

i think i am almost close to shoe insanity…or bankrupt…

other shoes to think about besides athletics…i have grwon attached to hiker’s and runners.

maybe because taht is what i am doing now but anyways, just soem designsthat might be over looked but like them…will dicuss why later tonight. 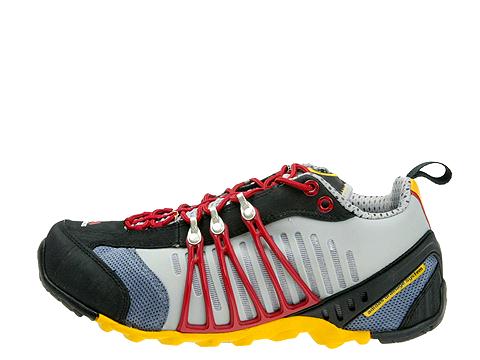 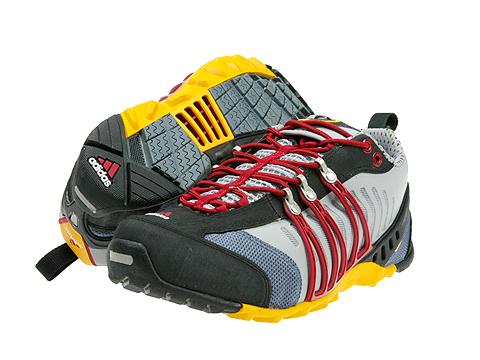 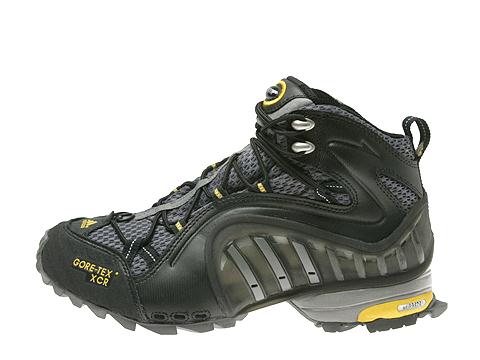 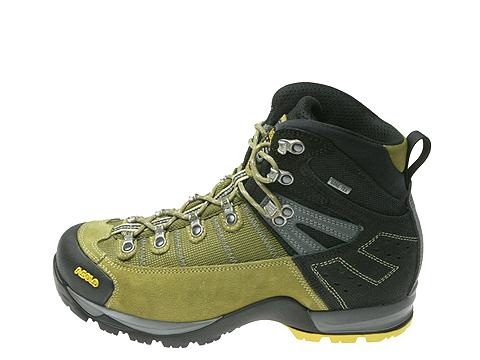 just a different look then sport. but I like the materials, and colors, you can do a lot with adventure footwear. lots of openings for break throughs and havent happend much yet…

trying to solve some things now with hiking footwear,…so we will c wht happens

runners… are athletics…but what i ment was a merger of the two hiking and running)…trail footwear type of thing.

Can’t find a picture right now…but my favourite shoe of all time is the Adidas Gazelle. Straight Comfort…not a performance shoe just a great all round wherever you wanna go…get dirty…keep clean…never out of style shoe. You can wear the anywhere with mostly anything.

the first pair i put on i wore out till there were holes and i still didn’t want to give em up.

In blue of course