PLEASE COMMENT ON MY BIKE … STILL LOT OF STUFF TO DO IN IT, BUT THOUGHT MIGHT FIRST TAKE UR ADVICE … I AM NOT A DESIGER. AM A STUDENT OF MECH. ENGG. 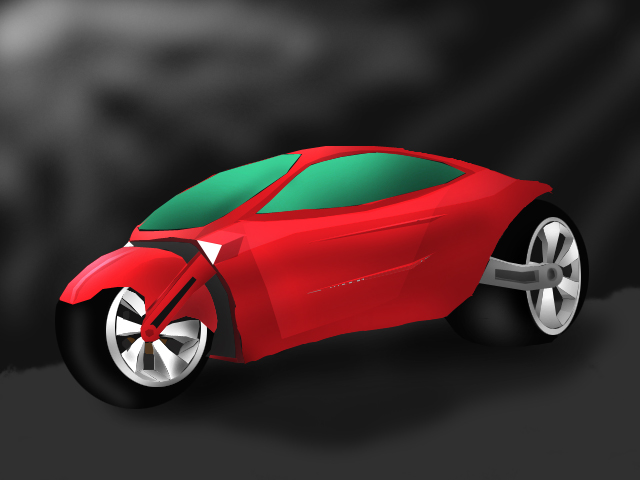 is it a motorcycle or bicycle? If the latter the wide tires will have to go as rolling resistance of the is a big power absorber and you have only .05 to .1 hp to work with. Fully enlcosed designs have a raft of problems from heat build up (500 watts of heat resting) to low speed and or stoping (where does your leg come out to balance you when you stop?). I have done a number of recumbents, one of wich is on permant display at artcenter and they are tough to do. One thing you might consider is making your “bike” a hybrid, using a electric motor and battery pack for a perfomance boost (use re gen braking to capture some ergs) this allows a bit looser design envelop.

Looks to me to be a Carver…

Front part roles, side to side. rear 2 wheels stay " car like" on the ground.
Didn’t ride it but "They say it is a lot of fun

Looks to me to be a Carver…

Front part roles, side to side. rear 2 wheels stay " car like" on the ground.
Didn’t ride it but "They say it is a lot of fun

yup carvers are fun, gm did one in the early 80’s but never went past prototype.

For reference, here’s the GM:

the idea of a 3 wheeler may be interesting - it eliminates the concerns with putting your feet down. And, if you treated the 2-wheel end of it so that the wheels articulated up and down allowing lean (like the MP3 scooter that Piaggio does) you could get the handling performance of a motorcycle (+ some in the rain! - which goes well with the enclosed cockpit)…

yeah… working on a three wheeler right now too. ill post some stuff once i scan it