here is a video projector design concept i’ve been working on. i’ve presented something like this on these boards before and the feedback i got here was very useful, i’ve since taken into account that critique and it has helped me develop this concept. again, i would be very interested in hearing your constructive criticism of this.

as with many of the products i like to design, i try to present a process that exhibits non-typical form development and innovation. the form development for this concept was initially inspired by streamlining and early american industrial design followed by fluid and aero-dynamic modern design. i wanted to embody a fluid, dyanmic and modern speedlike form for a video projector - an expensive consumer product whose current designs seem mostly static and repetitive. in a way, i wanted to celebrate american entertainment - one of the strongest industries here - with a movie projector that imbues the values of the industry : forward, disruptive, dynamic and innovative.

in regards to innovation, instead of the usual four screwed in feet used to adjust the physical position of the projector, i’ve suggested a friction fitted ball and socket joint to reposition and calibrate the projector head. the socket is in the foot while the ball is attached to the support cradle in the projector body (the ball resembles something like the ibm selectric typewriter). a rubber boot connects between the foot and the main projector body. so when somebody wishes to reposition the projector head in favor of watching video, they simply grab onto the body and move the head into the desired graduated position - to me this seems more intuitive and less cumbersome. the other innovation i’m suggesting is how the projector can rest on a table in the upright position or how it can be inverted and mounted onto a ceiling - a very common location for a video projector - without disrupting the overall aesthetic and controls interface. lastly, i tried to disguise the parting line in the main body by having it run through the vent pattern. i didn’t do any remote design for this, i figure the world has enough of those and the future of that is an android/iphone app.

the proposed concept uses a combination of passive and active cooling systems, passive through the cast aluminium body and active through the 4 variable fans housed within. when the projector is in the roof mounted position, there is provision for inline cabling directly from the ceiling into the projector for power and hdmi. while the projector is sitting in its upright position, a rear cable panel can be removed at the back of the foot for power and hdmi cable access (a combination of these configurations is possible). the projector features built in wi-fi and sd storage with a microsd card drive onboard (everything is mobile storage these days, the new miro sdxc will feature 2tb cards). the led backed power button at the back has multicolored leds letting the user know of other issues such as change the bulb, standby mode, etc.

i did some foam sketchmodels of some of the concepts, i didn’t include them here, they look similar to the sketches above. the measurements for the internal optics are based onexisting projector designs, i am prototyping the ball and socket joint to see how well it could work (3d print). i used sketchbook, alias, solidworks and keyshot to develop this. this was a fun project for me, i would really like to build one of these but the parts are wickedly expensive so i guess i’ll have to settle for some sketches and renderings ! 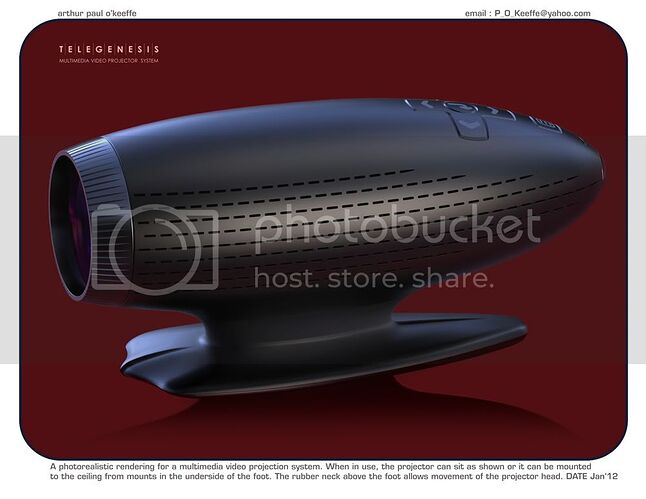 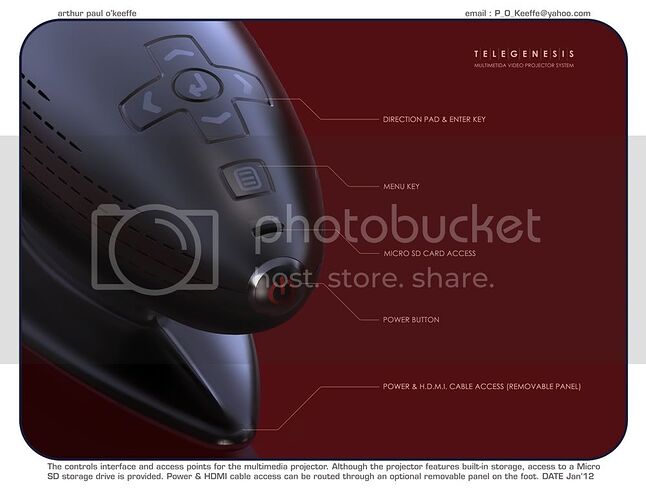 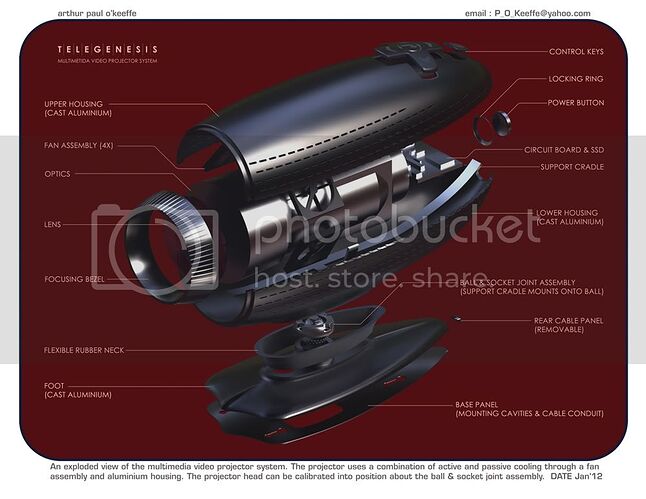 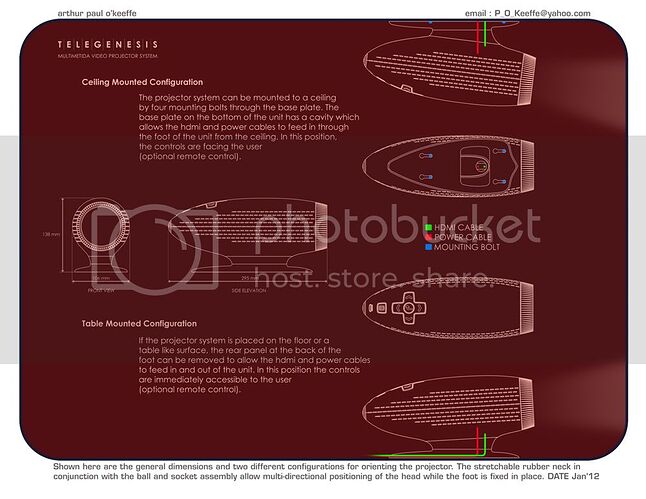 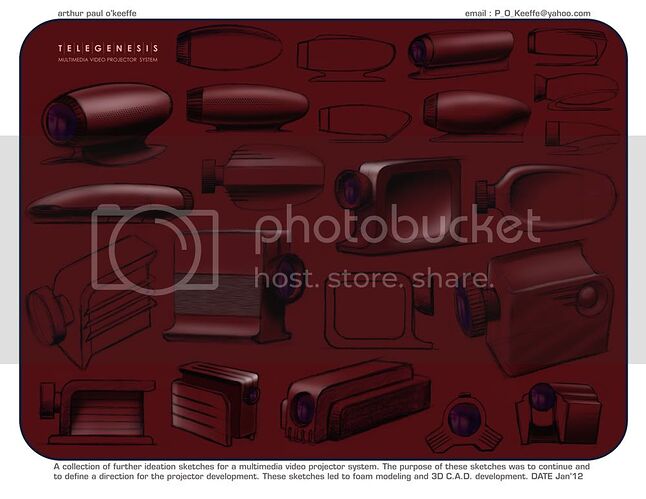 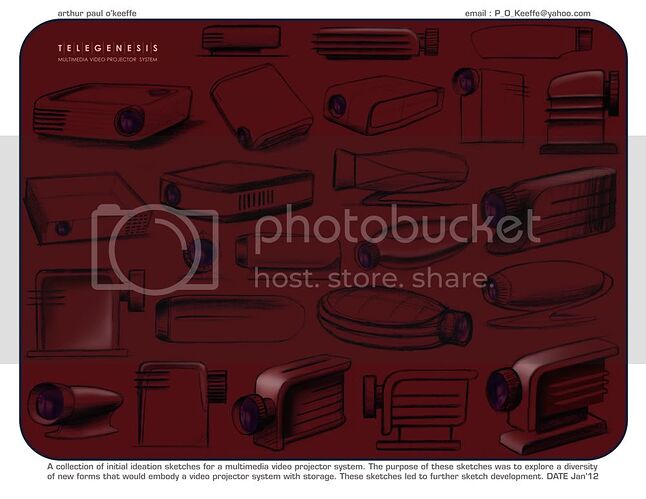 The design and exploded views make it look like a very convincing product! I’d like to know a bit more about how the projector is installed or where in the home or office it would go. Maybe you can show some full sized photos of the projector in context.

in regards to installation, i wanted to provide options for both permanent and temporary installation. many users, both office and home, i’m guessing would opt for the permanent installation where the projector is typically mounted to a ceiling. this involves mounting four custom bolts into the ceiling, each having a reveal cavity near the head, that would clear each of the large mounting holes in the base and then allow the projector to be fnally slid into place.

in the case where the projector is being used in a temporary environment - for example, bringing it out to the garden on a late summer evening to watch a movie - it would typically be positioned in the ‘table’ mounted configuration as shown. other locations for this i guess would be conference rooms, living rooms and home theater rooms. i agree that some in situ renderings would further the sense of usability and realism for this, i must look into how to do more of these kinds of renderings as i see they are becoming a lot more popular in i.d. portfolios.