Mozilla is really starting to pi$$ me off...

Don’t know what happened yesterday, but I can’t undo it… … I even uninstalled/re-installed Mozilla… no difference.

All web pages accessed by manually typing in the URL look like the first image below.

Any web page accessed from “book marks”, or via a google search looks like the second image.

Access to any webpage via Chrome, or Internet Explorer is normal (second image).

This only applies to my “side” of our computer… Mozilla runs fine (manual URL or bookmark) on my wife’s “account”. 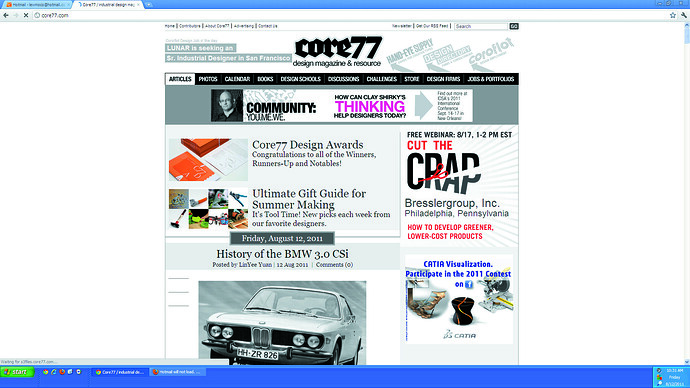 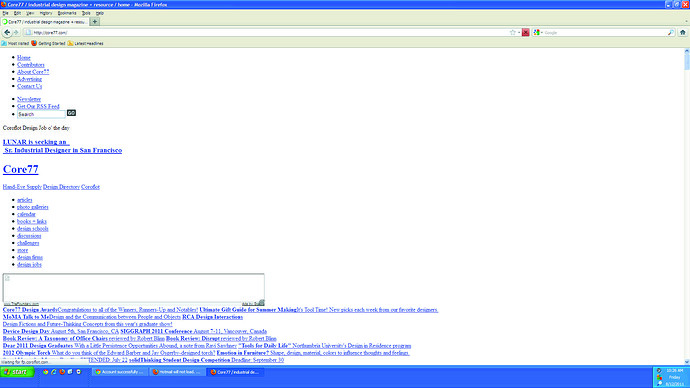 What type of OS are you using, and what version of Firefox?

Looks like none of the CSS or assets (images) are being downloaded. Weird. When you get the first image, try looking to see if “View > Page Style > No Style” is checked"? I tried googling this issue to no avail. Switch to Chrome! I love Chrome.

hmmm mm m … just tried restarting with ALL Add-ons Disabled… … and it and everything seems to be like it was.

guess I will try “enabling” them one by one to see which one it is… . or not. It would be nice to know what exactly pi$$ed it off…

I’m using Chrome right now… like it… successfully imported all of my Mozilla bookmarks, but haven’t figured out how to have a “google search” window up in the corner yet… handy thing to have…

In Chrome, I think you can just type your search phrase into the Address bar, hit enter and it should search for it on google.

In Chrome, I think you can just type your search phrase into the Address bar, hit enter and it should search for it on google.

I re-enabled all add-ons, with no negative impact … might have been a default setting within one of them (?) … either way Mozilla is back up and running.

There are many things I hate about Chrome. 1 being, on occasion, check boxes and radial buttons are not visible. It can be frustrating at times.

But, you do have Angry Birds at your fingertips via chrome.angrybirds.com

Still hold on to Mozilla for most of my internetting.

Chrome is just fast. Fast and speedy. It works for a majority of things out there. I’m not sure what’s going on with the Youtube embed code thing, but I wonder why it doesn’t work… YT and Chrome are both Google products.

Tangerine: Are you running a 486 DX2 80 or something? Computers are so fast today, this makes no difference. I prefer Firefox because of the add-ons and it seems more universal than Chrome. As NURB said, sometimes Chrome does weird things with buttons.

Har har. The very add-ons you prefer slow down FF, especially at launch. It’s a minute annoyance (startup time) that has little impact on use during, but I like speedy startups. Firefox is also a big memory hog and leaks memory all over the place for no reason. I also prefer Chrome’s tabs being run as a separate process (so if one crashes, the others are unaffected). Search and URL integration is also a big plus.

Firefox is also a big memory hog and leaks memory all over the place for no reason.

Firefox is also a big memory hog and leaks memory all over the place for no reason.

Luckily I have 4gb in this bad boy.

Tangerine: I’m glad I’m not one of your dates, you cheapskate

Woops, I think I have a few too many tabs open. Thank god for 8 gig ram 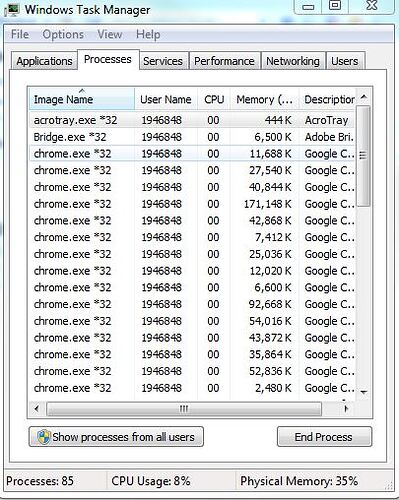 Tangerine: I’m glad I’m not one of your dates, you cheapskate

In the long run, they’ll thank me for it

Well, Firefox has pissed me off for the last time. Just switched to Chrome and I’m not looking back. You know what did it for me? Full Screen Weather App. For a closet weather geek like me, it’s perfect.

I was tired of Mozilla hanging on my netbook. I just don’t have enough RAM and processor speed on this thing to run it. Downloaded Chrome. I didn’t realize how much the Chrome add-ons have been developed. Wow! I’m sold!

FF and Chrome both seem to be crashing a lot lately… .

I rarely had FF crash, it’s just so slow on my laptop. Switched to Chrome on 2 of the 4 computers I routinely use.

On a side note, what do people use on phones/tablets? I was tired of the Android browser after a week. Installed Opera and love it. Great interface for a tablet.