(put this in the wrong section) A project that i have long desired to do. Take a bike and get it restored, it runs but needs some part replacements and some rebuild

And now with two sons it will be a great opportunity to see if they like wrenching, not sure if its anything special 1974 Kawasaki 100cc but hey for $100 - with 10,000 miles i dont think i could have passed it up. I hope to post picks as we progress. 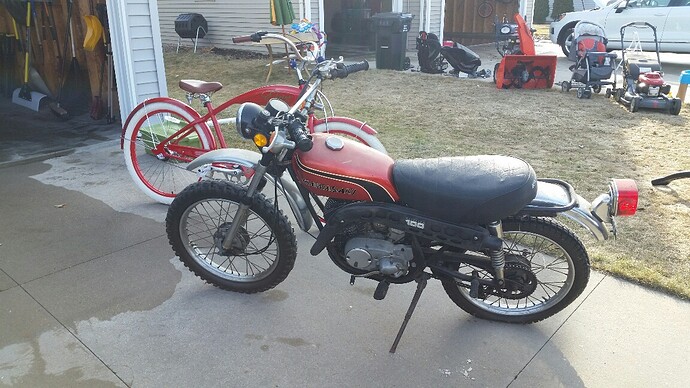 Looking forward to see the outcome on this restoration.

Is it still working or it is already in peaces? How is the process going?

I hit a issue which was time for the project, so it will get picked back up soon… need to fix the gas flow as i cant keep it running. it either gets no gas… or pours outs.

I have rebuilt the carburetor and had that double checked for errors… I’ll post some images and videos. I want it running before i tear it down.

_float is pierced and leaky, so it floats sometimes and other times not (doesn’t float when it’s full of gas, then drains over time and floats again for a little while until it fills up again)
_float height incorrectly set, sometimes starving the bowl (larger throttle openings), sometimes not
_float valve worn, so it seals sometimes and leaks othertimes (flooding/gas everywhere)
_contamination (usually rust) coming out of the gas tank, getting through your gas filter (you have one, right?), and mucking up the float valve so it works intermittently, sometimes flooding, sometimes not

If you’ve done all that, then let’s think about what ELSE it could be.

Hey CWatkinson - ever get your gas flow issue solved? Would like to hear about it.

Hey CWatkinson - ever get your gas flow issue solved? Would like to hear about it.

My proper authentic carb replacement kit, and gasket should arrive next week. (no after market for me again) then it just becomes time availability as im trying to complete the bedroom project…

Hope that does the trick! Keep us updated as you can . . .