Most Advance Yet Unaccepted Products

I’m doing a paper on Raymond Loewys MAYA (most advanced yet accepted) principle. For those that don’t know he bascially say’s that consumers of products ‘will only go so far’ and there is a ‘shock zone’ which results into a resistance to buying. It’s obviously a bit depper than that but he goes on to mention how a smart designer understands where the shock lines lay in each particular problem they face.

I’m looking for some products that maybe show the MAYA theory in action. A product that has just been ‘too much’ for the consumer, maybe due to it’s complicity, radical design etc.
Having trouble finding examples, because obviously unsuccesful products tend to be buried and forgotten. Ideally I’m looking for something that built up a lot of hype before it’s release and was a big let down…

Just studying the delta between concept cars and what gets produced is enough for a thesis on MAYA.

You can also look at furniture design, particularly the modernist movement and how most people are unwilling to give up on tradition, even if it means increased utility, comfort etc.

Fashion is another good category where tradition has a strong influence.

not sure if it has to be a current product, but dymaxion car/house

How about some of Leonardo Da Vinci’s crazy stuff. I mean a Helicopter!?

Playoffs!? With this team?

sorry, could not resist

Tuckers turning center headlight…designed to allow you to better see as you turned down the poorly lit roads of the time. Not well accepted, even mocked by many industry critics of the day. Now (within the last 3 yrs) most high-end luxury cars have the same feature.

Example to how the MAYA principle migrates with time. Geodesic house is another example mentioned. Now you can find one in most cities.

back in the day, when i was a wee industrial designer working at herman miller, there was a desking system already in the chute that was being tested in the field (full office setup in a working office). the project was about 2-3 years in the development. it featured transluscent plastic injection-molded tops with legs that plugged into a raised floor for wire and data. it was very slick, very well-developed, but the people who were used as guenia pigs panned it because it felt too foreign to them, essentially. the project was shelved, though some features and research were sent to other development projects. i always admired that they could develop a full line of products to the n-th degree and then just shelve them because it was too advanced for the market.

What about the Segway?

…and it is so practical for nearly any use.

A lot of Luigi Colaniâ€™s designs are really incredible and advanced, but are maybe too extreme for the regular customer. 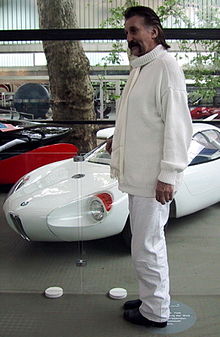 Luigi Colani (born Lutz Colani 2 August 1928 – 16 September 2019) was a German industrial designer. His long career began in the 1950s when he designed cars for companies including Fiat, Alfa Romeo, Lancia, Volkswagen, and BMW. In 1957, he dropped his first name Lutz using the name Luigi. In the 1960s, he began designing furniture, and as of the 1970s, he expanded in numerous areas, ranging from household items such as ballpoint pens and television sets to uniforms and trucks and entire kitche...

The Concord > at the time,international business travel is not at current levels. To offset poor sales, they raised ticket prices… driving sales down further. I would say Air France and British Airways were not in a position to manage it well either, both where strapped for cash.

Ironically the Concord’s best year in sales was it’s last. Partially upped by the tourist attraction of flying faster than sound before the planes were grounded, I think it showed public interest.

Today, if a carrier like Virgin, Cathay Pacific, or Singapore Airlines ran a supersonic passenger jet from LA or San Fran to Hong Kong I bet it would do well.

I think the attempts to integrate the Metric System into the US is another example of how the familiar can outweigh something with superior function! Personally I think it would be cool to go all the way to metric time.


I could maybe argue for the use of TV or the horseless carriage. It took both technologies nearly 20 years of development before it was truly embraced by the general public.

The only question is do you lengthen hours and go to a 20 hour day with 2 units of 10, or just say fug it and make a 10 hour day with really long hours?

I think TV and Cars are pretty good examples, people didn’t think they where necessary. Early TV didn’t have as much programing as radio and early cars where unreliable and slower than horses, plus super expensive and the parts were not interchangeable. It was only after the kinks were worked out that they took off.

You know what caught on pretty quick though: ATM machines. They went from nowhere to me being able to fly to Hong Kong with 5 bucks in my pocket and take out a bunch of HK dollars at any ATM in what, 15 years? The convenience factor was just so high.

He’s got a chapter on how the radical Herman Miller Aeron Chair tanked with focus groups, but succeeded anyway. That also reminds me of the original iMac story which was radical and involved throwing out the focus groups.

I love the digital camera example posted above. What other revolutionary products inherited the look of the last generation of products?

Outdoor lighting fixtures. On most american homes they look like they are supposed to be gas powered.

Actually, American homes in general. Even though they are constructed out of new materials, compressed fiberboards, prefab trusses, pad or footed foundations (if you live out West), UV windows, run with fiberoptic lines, 30 year roofs and so on, most have an aesthetic from between 1850 colonials and 1920 bungalows. Why? Familiarity I guess.

The same goes for the furniture inside most of those homes. Queen Anne chairs mass produced in factories.

The home looks traditional and familiar, while the office building looks clean, efficient, and modern. Each reflects the ideal “ethics” of the place I suppose.

One interesting thing that has gone the opposite way is the home phone. It has evolved to look more and more like the mobile cell phone, the product which threatens to replace it.

Video googles have not been widely accepted yet.
They’ll make you “look” like Geordi LaForge

Has anybody actually seen somebody using one of these?

“New “landmark” research finds that alcohol and tobacco are more dangerous than some illegal drugs like marijuana or Ecstasy and should be classified as such in legal systems, according to a new British study.”

Yo brings up an interesting paradox… Tv and automobiles weren’t generally accepted for a couple dozen years due to the general PUBLIC. The ATM though, took 15 years for the banks to sync and fill the demand- NOT the public.

I’m not sure if you meant to use it in that manner, but an interesting point for sure.

The fax took over a century to take off.

The first actual fax was debuted a little later on at the 1861 World Fair (Cristal Palace), when phones were still in their early days. However they didn’t transmit faxes over long distances until the early twenties. They became popular in Japan in the seventies (because it was much easier to handwrite kanji characters) but they didn’t really take off in the US until the eighties.

The videophone has got to be somewhere near the top of the list. The concept has been popular in movies since before there were ‘talkies’, and the technology caught up in the sixties. There was a big push of videophones in the seventies, but it totally flopped. Then again in the early nineties, with the same effect. And somehow we accepted webcams and PC-based video telephony (cucme, netmeeting, etc) although it much less user-friendly.

How about the fate of Audrey too (stand-alone web-browser)?